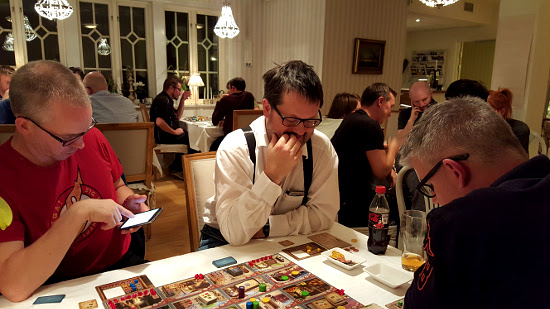 This past weekend saw my sixth annual boardgaming retreat: 43 hours in good company at our usual small Nyköping hotel, all meals included. My buddy Oscar organises everything. There were a bit more than 20 of us this year after a few late cancellations, mainly guys in our 30s and 40s. After Sunday lunch I left early and drove to Norrköping where I gave a talk about my recent excavations to 50 keen members the Friends of the Town Museum association, just like after the 2010 retreat.

I played thirteen sessions of nine different games in Nyköping. To give you an idea of how popular each individual game is, I’ve included its current BGG rank. For instance, Splendor’s 71 means that right now there are only 70 board games that the largely US-based users of Boardgamegeek.com rate more highly than that game.

This past weekend saw my seventh annual boardgaming retreat: 43 hours in good company at a small hotel (in Nynäshamn for the first time), all meals included. My buddy Oscar organises everything. This year we broke the attendance record, with 28 participants, mainly guys in our 30s and 40s. Before…

This past weekend saw my third annual boardgaming retreat: 48 hours in good company at a small Nyköping hotel during the slow season, all meals included. Me and my buddy Pieter took a walk upriver to the first bridge and back past the castle ruin late on Saturday night, but otherwise I spent my…

Reiner Knizia is one of the board-gaming world's greatest celebrities, famous for a long string of hit games. According to the members of Boardgamegeek.com, the best of Knizia's games is Tigris & Euphrates (1997), which is #11 on the site's thousands-strong ranking list. I can't really…

I spent last weekend at the annual boardgaming retreat organised by my friend Oscar. This was my fifth retreat, and I enjoyed it greatly. Oscar negotiates a good off-season all-inclusive deal for 25 of us at a small rural hotel, and then we spend two days gaming and sharing meals. People bring huge…

Did you play Boggle in English, Swedish, or both? I would think that to play in Swedish, you would have to accept the standard transliterations for accented characters (å->aa, ä->ae, ö->oe), as there aren't enough Swedish speakers to justify a version of Boggle with those characters (as opposed to Spanish, which might have enough demand to include an Ñ in those countries). Boggle is, of course, the only one of those games I have played.

And TMBG would like to remind you that Istanbul is no longer Constantinople. ;)

There are at least two Swedish editions of Boggle. One is stupid though, having ÅÄÖ on the same die.

Sounds like you had a lot of fun! It does seem that you went for shorter games during the event? Unlike one of the really huge and long empire builders?

Indeed, I prefer games that play out in less than three hours. A perfect game night for me is one where we play three games and drink two pots of tea.