By aardvarchaeology on February 2, 2016.

Sweden's bedrock has been entirely abraded by the inland ice. It sanded down the country like a big wood planer, leaving smooth lovely outcrops known as hällar all over the place. This is the main natural prerequisite of Sweden's rich rock art tradition. Most of it dates from the Bronze Age, 1700–500 BC.

Denmark hardly has any visible bedrock, so they don't have much rock art over there, and what they do have tends to be on boulders. It is thus hardly surprising that when you do find figurative art on boulders in Sweden, it tends to be in the provinces closest to Denmark.

Near Asige church in Halland we have one of the most monumental examples of this. Two flat stone grave markers and two pairs of big honking menhirs with rock art on them! One pair has become embellished with an antiquarian name: Hagbards galge, "Hagbard's Scaffold". This refers to a tale told by Saxo Grammaticus in his History of the Danes and is probably a coinage from about 1800: after us Scandies rediscovered Medieval literature but before we realised that the world is considerably more than 6000 years old. There was a time when intellectuals thought that all Scandinavian antiquities could be explained with reference to the Sagas.

The legendary rock art surveyors Sven-Gunnar Broström and Kenneth Ihrestam have often figured here on the blog. Now they have reexamined and documented Hagbard's Scaffold, finding lots of previously unseen motifs. (But first the County Archaeologist had someone kill and remove all the lichen on the stones.) This transforms the monument from a group of menhirs with some rock art on them into honest-to-goodness pictorial stelae! Though the mate of the birth-giver stele has only cupmarks and the mate of the shield-bearer stele has no markings at all. 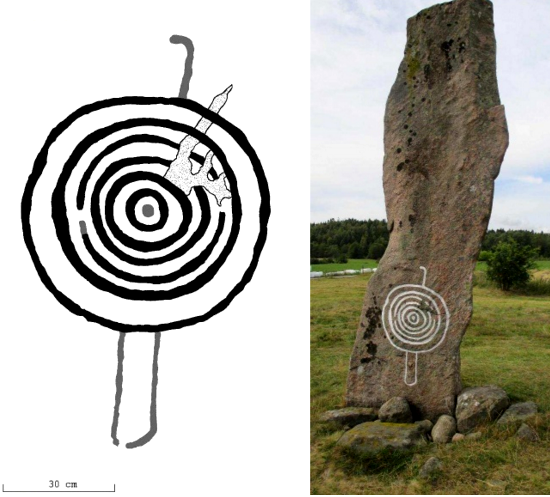 Stele A, south side. The previously known concentric circles representing the sun and/or a shield have now been found to have two legs and a head, that is, we are looking at a person holding a shield and/or the sun. 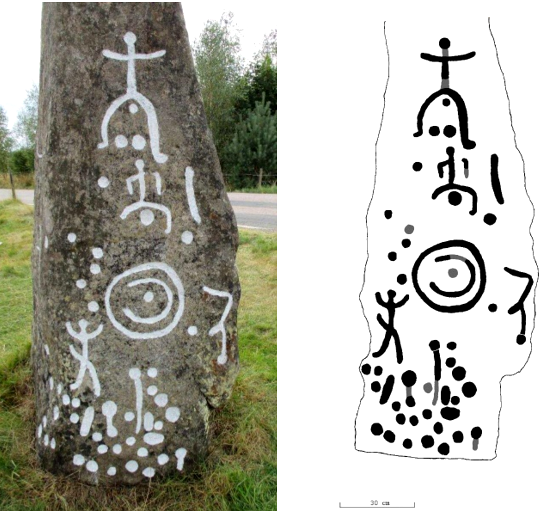 Stele B, north side. Most people in Scandy rock art are just stick figures, so gender is sometimes difficult to judge. An oversized erection identifies men, like the guy bottom left. A ponytail hairdo is a common identifier for women, and there are cases where the ponytail is combined with a cupmark in the crotch. This attribute identifies the two otherwise ungendered top figures on the stele as women. Their unusual, extremely wide-legged stance suggests to me that the artist is emphasising female fertility. The concentric circles represent the sun and/or a shield here too. 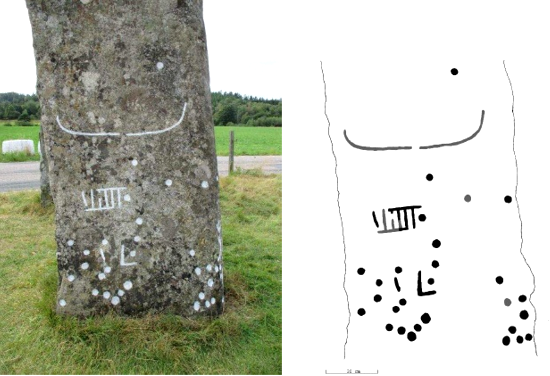 Hello, do you have a Latitude and Longitude for these stones?

One might cheekily interpret the north side of Stele B as a reminder that, even in matriarchal societies, crap rolls downhill...

Eew. Makes you wonder why the guy bottom left has a hard-on.

Martin, thank you for the information. I am an archaeo-astronomer and have surveying burial cairns and standing stones throughout Scotland for the past 30 years in regards to their possible solar lunar orientations. This also involves photographing these events and to date I have over 250 pictures showing the sun rising or setting in line with these monuments. Some of my work was published in Antiquity. This also involves rock art, which is why I am interested in the Hagsbard Scaffold stones. It is possible to remotely survey these stones on Google Earth and this shows that from the north-east stones by the roadside, the sun will rise in line with the other two south-east stones in early November and February. From the south-east stones, the sun will set in line with the north-east stones in early May and August. These orientations to the sun are common in Bronze Age monuments in Scotland. I was wondering if you know of anyone who might be interested in photographing these events, which would lead to a better understanding as to what they were originally use for. I'd be happy to send more information on my work if you were interested.

Douglas, sadly I hardly know anyone in Halland. Also, to my knowledge no adequately trained Swedish researcher is currently doing any archaeoastronomy. Curt Roslund died in 2013 and my good friend Jonathan Lindström hasn't worked with those issues since the 90s.

Interesting piece, but I must react against the first two sentences. As I write in the linked blogpost this is how we were taught at school -- the inland ice as a wood planer or bulldozer. But recent research has shown, not only that the inland ice was plastic, but also that there are regions in Sweden where the ice just deep freezed the old land surface and left preglacial landforms intact. This means that there lands in the north of Sweden where tropica landforms like tors are still there and that the land could house archaeological finds 125 000 years old. The archaeological consequences of these now 15 years old results from colleagues in physical geography are yet to be explored. The blogpost is in Swedish but contains links to some relevent articles in English
http://widgren.blogspot.se/2009/03/afrikanska-berg-i-pajala_6135.html
A beer to the first archeologist who finds a pre-glaclal open air settlement site in the north of Sweden!

Love it! Jens Heimdahl talked about those landscapes in Fornvännen 2006.

I talked about this with physical geographers last Friday and learned that they had recently compiled a new map of all know areas with frozen beds. See my blog in Swedish with links to texts in English.http://widgren.blogspot.se/2016/02/fanns-det-neandertalarre-i-skandinav…