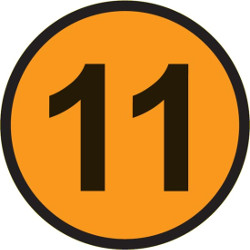 Today is Aard's tenth anniversary! And 16 December was my eleventh anniversary as a blogger, since I blogged at Blogspot for over a year before I came to Scienceblogs.

2016 has been a good year for the blog's traffic: about 540 daily readers which is better than 2014 and 2015, very encouraging! It hasn't been a great year for me professionally though, with a number of really bad disappointments in academia, mostly related to nepotism, and quite a lot of financial worries. The latter luckily turned out to be unfounded. And I'm pleased with having directed my biggest excavation yet and published my first pop-sci book. Also it's been a really good year for me as a dad.

Of course, many people will remember 2016 for big triumphs of right-wing populism in the UK and US, and for a sad string of celebrity deaths. I say let's remember that Austria elected a Green president over a Brown one, and Keith Richards is not only still alive but still touring!

As for my blogging plans for 2017, I don't foresee any particular changes, largely because I have nothing particular planned for other aspects of my life. As far as I know today I'll spend 2017 finishing a book on the Medieval castles of Östergötland at 75% while editing Fornvännen at 25%. You'll find me here, Dear Reader.

"and Keith Richards is not only still alive but still touring!"

Just keep feeding him fresh brains and he'll go on for as long as we want.

And congratulations on the anniversary!

Congratulations on the anniversary! Few bloggers make it that far.

Well done, Martin! I always enjoy catching up with your posts, and even enjoy your "co-bloggers" who post in the Comments section :).
Keep up the good work, and here's hoping for a great 2017.

Big thanks, Jim! I've got the best commenters. Yuge!