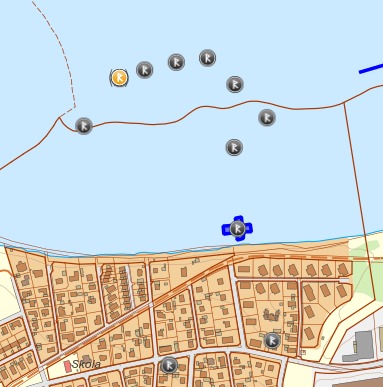 The latest inland ice was 3 km thick and its weight left a big dent in Scandinavia. Since deglaciation (which is, on the geological time scale, a current event) the dent has been straightening out. This causes land uplift. But just outside the edge of the dent, it causes the land to sink. Southernmost Scandinavia is losing land to the sea, not gaining it.

The fulcrum of this see-saw crosses Lake Vättern right at its southernmost point. The lake is receding at one end and encroaching at the other. This is why there is an Early Bronze Age burial cairn (Raä 140:3) and sacrificial bog (Raä 140:4) on the lake bottom off the town of Huskvarna . The cairn was originally built about 1400 cal BC on a hilltop above the lakeshore, in a location where it would be widely visible from boats. It didn't turn out that way.

Later the cairn was joined on the lake bottom by Sanda parish's Medieval church.

I've written before about Huskvarna on the subject of the substance abuse epidemic that decimated two generations of the town's industrial workers in the 20th century.

Update following day: my knowledgeable colleagues Staffan von Arbin and Claes Pettersson point out that only one cairn is actually known at present, not several as I implied in the original wording.

In the Lake MÃ¤laren area of Sweden, you rarely find any large pieces of Bronze Age metalwork in graves or at settlement sites. When the beautiful larger objects occur - axe heads, spear heads, swords, neck rings, belt ornaments - they almost exclusively come from odd find contexts that I for one…

My buddy Niklas Ytterberg recently sent me an impressive excavation report in Swedish. Constrained by the field-archaeological paradox, he dug a really nondescript Neolithic settlement site at Djurstugan near Tierp, Uppland in 2003. Then he somehow found funding to subject the measly finds to a…

Burnt Mound Near the Sea

Small mounds consisting of burnt stone are a signature feature of Bronze Age settlement sites along the coasts of southern Sweden. They were the subject of my first academic publication in 1994, though I'd hardly even seen one, let alone dug one. This I have finally begun remedying today, when I…

A t least those cairns have been safe from modern looters.

It is a pity there is no underwater burial cairn that is older than 4004 BC. I would love to see how the creationists would try to rationalise that. Pre-adamite water breathing nephilim?

It is a pity there is no underwater burial cairn that is older than 4004 BC.

There almost certainly are underwater burial sites more than 6000 years old; they just haven't been found yet. They are hard enough to find on land.

Of course, give it a few decades, and there will be some such burial sites underwater.

Oh yes, we have way older burial sites without cairns (from the Late Mesolithic) in the waterways between the Danish isles.

(OT) Enough, Australia, you’re getting carried away http://www.australiangeographic.com.au/blogs/wild-journey/2017/05/austr…
Even the trees are deadly. And it is of course the best-looking trees.