Bob Lind has yet again managed to get the National Heritage Board to abdicate its responsibility at Ales Stenar, a beautiful 7th century AD burial monument near Ystad in southern Sweden. Bob has self-published odd interpretations of the site that have found no traction among professional archaeologists. He has kept vigil at Ales stenar for decades, lecturing to visitors, ranting at the municipal guides and occasionally attacking them. He has a very large sign on site, next to the National Heritage Board's, with permission from the County Archaeologist. My colleague Björn Wallebom has criticised this, and the local paper ran a critical article yesterday, quoting myself and others.

In 2007 the National Heritage Board's representative Ewa Bergdahl said on this subject,

There isn’t just one single truth. This place is so incredibly more complex than previously believed, … You have no privileged position with us just because you do research at a university

And this tiresome old post-modernist anti-science relativism persists at the Board. This time it's Qaisar Mahmood, my buddy from Leftie and refugee volunteering circles, who says stupid things to the press without the benefit of any archaeological training.

Our responsibility is to present the image we think is right. It would be wrong if we took measures to exclude other images. … We have seen no reason to file a complaint against the County Archaeologist's decision. We take responsibility for what is ours. Just because we don't file a complaint it doesn't mean that we support or open the door to other versions.

1. The National Heritage Board's responsibility is to present the image that scientific consensus thinks is right. Nobody else's. Certainly not its non-archaeological office staff's.

2. The Board owns this property. Its staff are not taking responsibility for what is theirs.

3. The fact that the Board doesn't file a complaint does mean that it supports and opens the door to other versions.

4. If someone wanted to post an equally pseudo-scientific sign about Odin that contained hints of extreme-right propaganda, then the Board would not allow it.

5. When the National Heritage Board allows a sign with a discredited interpretation at a high-profile archaeological site that it owns, then it is equivalent to public hospitals allowing faith healers to roam the corridors, tending to patients.

Update same day: Qaisar Mahmood and the Board's Custodian Lars Amreus have responded briefly on Facebook and Twitter to my criticism. If I understand them correctly, their line is that the Board of National Antiquities does not in fact own Ales stenar, they recently handed it over to the National Property Board. This organisation has never made any claim to archaeological authority. And it creates the question, why then does Qaisar Mahmood of National Heritage talk to the press about Ales stenar? As I said, this is an abdication of responsibility.

And another update: Qaisar has given me a long public reply on Fb, and I'll try to summarise it fairly here. He's saying that my expectations of what role the National Heritage Board is supposed to play in Swedish archaeology are no longer supported by its directives from the Ministry of Culture. The Board has in fact not abdicated from any position of archaeological authority in the case of Ales stenar. It can't abdicate, because it no longer makes any claim to such a position. Those are not its orders from our elected officials. I'm sure Qaisar knows what he's talking about. I just shake my head and wonder, will the real Board of National Antiquities please stand up? 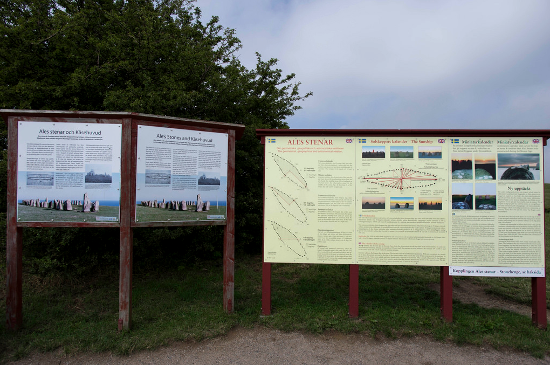 Signage at Ales stenar. Left: two copies of a sign from Ystad municipality and the National Heritage Board. Right: Bob Lind's signs.

My blogging about Bob's antics has grown voluminous over the years. Read it all here with a new category tag.

When the National Heritage Board allows a sign with a discredited interpretation at a high-profile archaeological site that it owns, then it is equivalent to public hospitals allowing faith healers to roam the corridors, tending to patients.

I'm afraid I have some bad news for you.

If the Board of National Antiquities claims it's not their job to decide things about archaeological sites, then what's to stop someone else for putting up a sign that says "This is all rubbish, my granddad put it up in the 1920's"?
Or "This is the property of my ancestors based on [gibberish] and therefore I will turn it into a swimming pool."?

I'm guessing that if someone else tried to claim it they would fight good and hard, but "controversy" makes it look exciting. Blegh.

The central decision making was devolved to the counties in the 70s. Someone on the county level, possibly the person in charge of nature preserves rather than archaeological sites, gave Bob permission to put that sign up. And that's where the National Heritage Board should have put down their foot, in my opinion.

You are invited to go through my papers

"There isn’t just one single truth."

Sometimes I just want to claw my own eyes out.

The sign I will put there:
"The stones were put there by aliens. For just $ 2000 I will mail you a genuine magic space rock from the site. It can cure cancer and make you younger."

OK, well let me make my own totally uninformed and uneducated assessment of what it is, just from having seen photographs of such things (although this is a particularly fine and intact one, from the range of such things that I have seen pictures of).

It's one of these: https://en.wikipedia.org/wiki/Stone_ship

Now, if an ignorant Australian civil engineer who has never seen one of these in real life can immediately guess correctly what it is, what possible excuse do the National Whoevers have for not abiding by the blindingly obvious? Or the County Archaeologist, for that matter, but I am assuming her problem (default gender assumption) is that Lind would simply not stop pestering her until she gave in, so she did, just to get him to go away and leave her alone, because she did not have the time and resources to keep fighting him off all by herself. He might even have been physically intimidating about it.

I have some sympathy for the County Archaeologist in that position - I have had occasions during my career when I had to deal with similar obsessive loonies, and unfortunately when you are a public official, you can't just tell them to f*ck off and stop being so stupid. What she needs is the backing of the National Whoevers to help her get him off her back, and they are playing the cowardly bureaucrat's game (something I am also fully familiar with) by just talking bureaucratic double speak and ducking the issue, so they don't have to deal with him.

Well, shame on them, and call them for what they are: cowardly know-nothings who are failing in their public duty.

John @6:
“There isn’t just one single truth.”
OK, if there isn't one single truth you'll be fine with exiting via the 35th floor window? No? Whyever not?
(Stolen from a much smarter person whose name I've forgotten.)

I've been there a couple of times. Can you briefly summarize the standard and the (presumably) crackpot interpretations?

Bob Lind: Ales stenar is a unique Bronze Age observatory built for the purpose of accurate calendar keeping and dating from c. 1000 BC.

JT@9 - I'm trying to think of any commenter I have seen who is much smarter than you. I haven't been able to think of one yet.