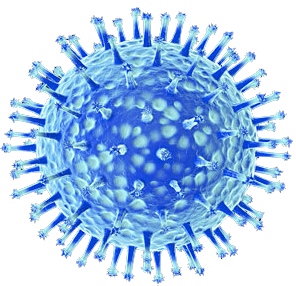 The next time somebody in your office or household has the flu, you might want to consider keeping your distance.  A new study published this month in Nature Communications suggests that about half of the transmission of influenza A results from inhalation of microscopic infectious droplets created by the coughing and sneezing of people infected with the flu.  The flu virus hitches a ride in these droplets, and may infect nearby susceptible people who breathe them in.1

The influenza A virus generally causes fever, coughing, body aches, runny nose, sore throat, headache, and fatigue.  Vomiting and diarrhea may occur, but are more common in children.3 Fever and most other clinical signs usually resolve within 5 to 7 days, but coughing may last two weeks or more.2 Children under 2 years old and the elderly are at greatest risk for complications such as pneumonia, and over 90% of influenza deaths are in people over age 65.2

Seasonal outbreaks of influenza are common in the United States, and typically occur during winter months.  During and average outbreak, 5% to 20% of the people in a community may become ill with the flu, and up to half of the people in environments like schools and nursing homes may get sick.2

In adults with healthy immune systems, the flu virus is shed in highest numbers during the first 3 to 5 days of illness, making spread of the flu most likely during this time.  Children may shed the virus for up to 10 days, and people with weakened immune systems may shed the virus even longer.2 In a typical outbreak, a person sick with the flu passes the illness on to an average of 1 to 2 other people.1,2

Previously, influenza A viruses were thought to be transmitted primarily by direct contact and by larger (but still very tiny) droplets generated by coughing, sneezing, and talking.1,2,3  These droplets are capable of travelling 1 to 2 meters, where they may come to rest in the eyes, nose, or mouth of a susceptible person and cause them to become sick with the flu.  These droplets may also fall upon nearby surfaces and objects, where the flu virus can survive for hours.  A person touching these surfaces or objects may get the flu virus on their hands, and then transfer the virus to their eyes, nose or mouth and become ill.1,2

The recent study, published on June 4, 2013, used a mathematical model of influenza virus transmission to evaluate the data from two previously published studies of the effectiveness of hand hygiene and facemasks for the reduction of transmission of influenza A viruses.   It suggests that the flu virus may survive in very tiny droplets created by coughing and sneezing that can remain suspended in the air as an aerosol long enough to be inhaled by nearby susceptible people.   The study shows that aerosols are an important route of transmission of the virus, and may account for as much as 50% of the spread of the flu.1

How you get the flu may determine, in part, how ill you get.  Influenza researchers have long suspected that inhalation of aerosols containing the flu virus can lead to more severe illness than exposure to the flu virus by direct contact or by the settling of larger droplets in the eyes, mouth or nose of susceptible people.  This is thought to be because larger droplets are trapped by the defense mechanisms of the upper respiratory tract, such as the large surface area of the nasal turbinates and the mucus lining the nose, pharynx, and trachea.  Smaller droplets, meanwhile, are capable of being inhaled deep into the lungs, resulting in infection in the lower respiratory tract which can cause more severe disease.  The current study found that there was an increased risk for fever plus cough in people suspected to have contracted the flu by inhalation of infective aerosols, which is consistent with current ideas regarding the importance of the route of infection.1

Understanding the routes of transmission of influenza is also important for designing control measures to reduce the spread of this disease.    Interventions such as increased hand hygiene and facemasks help to limit transmission of influenza by larger droplets produced by coughing and sneezing, but may offer little protection from inhaled aerosols.1 Additional methods for controlling the spread of influenza through aerosols, such as improved ventilation of enclosed spaces, ultraviolet lights (which are capable of killing the flu virus), and minimizing exposure to those infected with the flu could reduce the risk of becoming sick.1

So, what can you do avoid getting the flu?  The most effective way is to get vaccinated before flu season.  In the United States, flu season can start as early as October, though the peak months for flu are January and February, and sometimes even later.3 Because the flu strains circulating through the population change from year to year, you should be vaccinated each year.  The vaccine is developed to prevent illness caused by the flu strains likely to cause outbreaks during the flu season, but may not prevent illness from novel or unanticipated strains causing outbreaks.  Some people, such as babies less than 6 months old and those with allergies to eggs should not receive the flu vaccine.3  So the CDC recommends that you take additional preventive measures, such as good hand hygiene, avoid close contact with people who are sick with the flu, avoid touching your eyes, nose, and mouth, and practice good health habits such as remaining well hydrated, eating a healthy diet, exercising, and getting plenty of rest.5

If you do get the flu, what can you do to avoid infecting your family, friends, and colleagues?  First, avoid close contact with others.  Stay home from school or work if at all possible, and don’t run errands while you are sick.  In this way, you can avoid exposing others to your illness.  Second, cover your nose and mouth when you cough or sneeze.  Experts recommend that you cough and sneeze into a cloth or into your elbow, so that you don’t contaminate your hands, which are commonly implicated in the spread of the flu.  This simple practice can reduce the amount of infectious material you spread into your environment.  Practice good hand hygiene, particularly before touching doorknobs and other items that may leave the virus where others are likely to become exposed.5