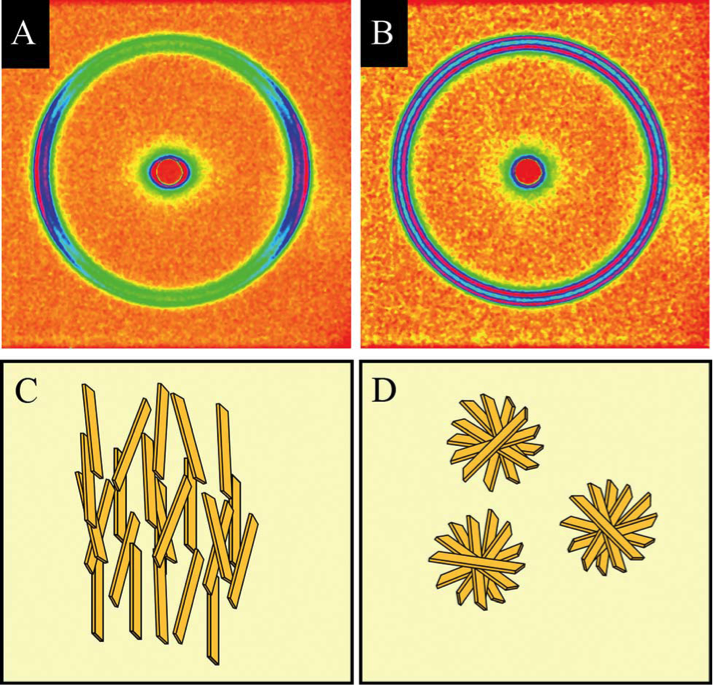 X-ray diffraction patterns reveal the orientation of fat crystals. The distribution and directionality of these crystal nanostructures (parallel to the shear field in C, randomly arranged in D) affects the flavor and texture of foods.

From butter in croissants to cocoa solids in chocolate, edible fats pack a flavor punch that delights like no other macronutrient we consume. Fats are the most energy dense macronutrients, providing more than twice as many kilocalories per gram as proteins or carbohydrates, which may be the reason we’ve developed a taste for them. Fats are an efficient method of fueling a surviving species, but what gives them their oh-so-delicious disposition?

The sensory characteristics of fatty foods come largely from the physical makeup of crystals that form within the nanoscale structure of fat molecules. As explained in a review paper by Alejandro Marangoni published in Soft Matter, fats are made up of fractal-like crystalline structures, which give rise to properties such as flavor, texture, meltability, and mouthfeel.

Fats are composites called triglycerides or triacylglycerides (TAGs) made up of one glycerol molecule and three fatty acid chains. The physical properties of these fatty acids and the positions they take on the glycerol molecule give rise to changes in the foods that contain them. For example, the length of fatty acid chains affects a fat’s melting point. Saturated or longer chain fatty acids, like those in milk fat or cocoa butter, will have higher melting points than triglycerides with mostly shorter or unsaturated fatty acid chains, such as olive oil. That’s why at your dinner table, the salad dressing is liquid, but the butter dish holds a solid stick.

Changes in flavor and texture of fats can also come down to which fatty acids sit where on the glycerol molecule. Milk fat contains short-chained butyric acid, which sits in the 3rd position, while cocoa butter’s 2nd position is populated almost exclusively by oleic acid.

Depending on how they are heated and cooled, triglycerides can crystallize into several forms. The resulting fractal-like crystalline structures give rise to flavor, texture, and meltability in foods like chocolate bars. Six different forms of crystal structure have been identified for cocoa butter. But only one form will turn out chocolate that tastes and feels good to eat.

The so-called Form V has a tuning fork structure to its crystals, which produces a melting range close to the temperature of the mouth. Chocolate manufacturers devote much effort to producing bars with this specific form of crystallization through the use of tempering, a process which heats and cools the chocolate to get a desired consistency.

If Form V crystals transform to Form VI, the chocolate will have a higher melting point and the cocoa butter will coat the inside of the mouth, leaving a waxy sensation. Form VI crystals can also bloom into  large, visible crystals, transforming a chocolate bar from a silky melt-in-your-mouth treat into a rough, white, waxy snack.

Marangoni and his collaborators have used x-ray diffraction at the National Synchrotron Light Source to categorize the many facets of fat crystals:

“At the mesoscale level (length scales within the micrometer range), we can witness a very diverse assortment of crystal habits – spherulites, needle-like crystals, microplatelets, disordered crystal aggregates, spherical crystal aggregates, fractal-like aggregates, and even some morphologies that defy proper description.

Despite the wide variety of crystal morphologies, they all share some common attributes: (1) the structures are awe-inspiringly beautiful when viewed under a polarized light microscope and (2) the crystalline mass in a network of these crystals is distributed in a fractal fashion.”

The discovery and characterization of these nanoplatelets adds to the knowledge upon which the food industry bases its design and engineering of food materials. Understanding how the physical chemistry of fats affects the way foods taste and feel could also potentially be useful when trying to curb the excessive consumption of fat-rich foods, writes Marangoni.

With close to 35% of the U.S. adult population and 20% of U.S. children identified as clinically obese, and the incidences of Type II diabetes and cardiovascular disease on the rise, the challenge for food engineers is to produce low-calorie foods containing fewer ‘bad fats’ while retaining many of the quality characteristics historically associated with a particular food.

There are two kinds of fatty acids: saturated and unsaturated. Saturated fatty acids have no carbon-carbon double bonds (-CH=CH-), they have only (-CH2-CH2-) single bonds. Notice that carbons only involved in single bonds have one more hydrogen than those involved in a double bond. They are "…

It seems kind of funny to be thinking of anti-freeze at the moment, with heat waves blanketing the U.S., but all this hot weather makes me miss winter. And so I decided it was time to re-post this from the original DigitalBio. Winter is coming soon, my bike ride to work was pretty chilly, and it…

The Science of Gravy

What makes the perfect Thanksgiving turkey gravy? Depending on your preference, it might be the smooth texture, the rich flavor, or the glossy sheen. No matter what the end result, the magic of gravy lies in the science of starch. So, what is a starch, exactly? A starch is a complex carbohydrate;…

So basically the fact that we like fats so much is because we evolved that way. That when we are in desperate need of food for survival fats are some of the most beneficial foods to eat. Although the complexity of their structures makes it much harder to break down without storing them.