The term “floating water bridge” may sound nonsensical, but it’s the most logical name for a phenomenon that occurs when two beakers of water set slightly apart are zapped with high-voltage electricity and the water molecules jump across the gap to connect and form a thin thread of water. The molecular structure that suspends this liquid bridge has stumped scientists for over a century.

Now, a team of scientists has peered into floating water bridges with high-energy x-rays using the Advanced Photon Source (APS) at Argonne National Laboratory. Their work, “Floating water bridges and the structure of water in an electric field,” was published recently in the Proceedings of the National Academy of Sciences. I spoke with Brookhaven National Laboratory chemist John Parise, who worked with the team at APS to explore this unexplained phenomenon. 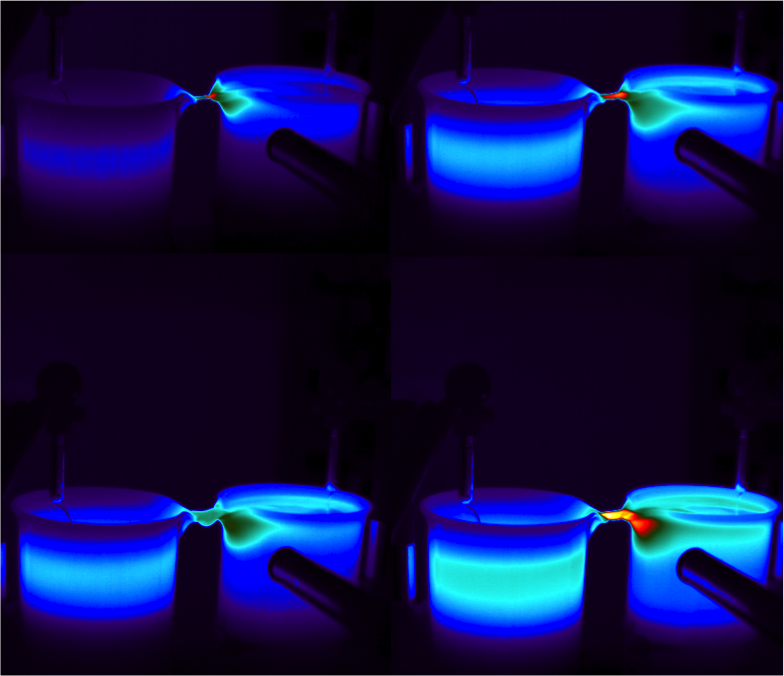 Q: For this experiment, you set up a floating water bridge and used the APS to shine a beam of x-rays through the water. What exactly were you looking for?

A: We were looking specifically for alignments in the water molecules that were different from alignments of the molecules in liquid water. We’ve recently finished a study where we’d gathered some of the best data ever taken on liquid water, so we had those data to compare with directly. That’s one of the things this paper on floating water bridges does—it looks for small differences between liquid water and the water in this water bridge.

Q: What were you expecting to find?

A: We started out thinking, gosh, there’s got to be some structure in this. If it’s not collapsing under the influence of gravity, there must be some alignment of the molecules. When you fire a beam of high energy x-rays through it, you’ll get a diffuse ring of x-rays on the other side, and you can detect these using an x-ray sensitive detector. But you should see modulation of the intensity around the ring that tells you that instead of the water molecules being randomly oriented that there’s a predominant orientation. Theoretical calculations tell us that the alignment, if it exists, should be along the bridge direction.

Q: How did the APS help you test for that alignment?

A: One of the powerful things about high-energy x-ray scattering is that you can take a lot of images vertically across the floating bridge or horizontally along the bridge very rapidly. Synchrotron radiation is so bright that you can take large numbers of images while the bridge is still stable. Plus, you can image the temperature—so you can take images of the part of the bridge that’s hot, the part that’s cold, the skin, and that type of thing.

A: As soon as we took our first shot, I said, “That looks awfully even. It just shouldn’t be like that.” The result is that there’s just no quantitative difference between the liquid water and the water in this floating bridge. I was very surprised.

It turns out that you need an awful lot of high voltage to align a significant number of water molecules, and that’s not happening with these water bridges. But we only know that now, after we’ve done the experiment.

The conclusion is that this water bridge must be stabilized by a very thin layer of water, and it’s basically surface tension holding it together—the surface tension across the top and bottom of that bridge.

Q: Did you think your findings were wrong?

A: Well yeah! But we did many, many tests and they all revealed the same thing. Of course, then we started to think that this was a sheath, that in fact the voltage was affecting only the molecules at the surface.

Q: What does this experiment and your research into the nature of water tell us?

A: Well, we wouldn’t be able to exist without water having the properties that it has. Life on Earth wouldn’t exist. And it’s all up to something as simple as the fact that water is a very peculiar sort of liquid, in many ways. These water bridges are a result of the geometry of the molecules and hydrogen bonding. It’s fascinating behavior and understanding the phenomenon at a deep level tells us something fundamental about liquid water.

Q: What more do you hope to learn about floating water bridges?

The next thing to do is to look very carefully at the surface and try to use more surface-sensitive techniques. That would be potentially a great thing to look at with the National Synchrotron Light Source II at Brookhaven National Laboratory, which will have much finer beams than the APS. At APS and especially at NSLS-II, we can do some small angle x-ray scattering studies to see if there’s any organization in the skin.

Water is a quantum liquid, the universal solvent, and it is essential to biology. The arrangement of water molecules in electric fields and at charged surfaces has important implications in electrochemistry, mineralogy and biology.

And once we understand this phenomenon in water, the obvious thing is to move on to other solvents. You can form bridges with other materials that are quite different from water and have much lower surface tension–the most likely explanation of the water bridge stability at this stage–but they all seem to have one thing in common: hydrogen bonding.

Water’s many unusual properties depend on its unique molecular interactions, and its structure has long been a matter of debate. Understanding the “how” of the water bridge stability may allow us to manipulate liquids, including water, with electric fields.

Is this the next Archimedes Screw?