How Single-Colored Is A Laser?

In most books or articles that talk about lasers, you'll see a definition of laser light in terms of "coherence". But coherence is sort of a term of art, and the books will go on to explain coherence in terms of the waves being in sync with each other, or the emitted light being very monochromatic, or something else slightly vague.

This is all pretty good as far as it goes, but we'd like to do a little better. (Though for this post, not much math. But don't get too comfortable!) The word "coherence" means something like "holding together", and this is actually a pretty good description of the technical meaning of the word in physics. Generally physicists think of coherence in terms of correlations, or how well the laser output stays consistent over time and space. In laser physics, we call those two quantities temporal coherence and spatial coherence. Temporal coherence is how consistent the output of the laser is over time, and spatial coherence is how consistent the laser is over the cross-section of the beam. In terms of the purity of the beam color, what counts it the temporal coherence.

This is one of those things that's better with a picture. Light is an electromagnetic wave, and so if we plotted the electric field of a bright green light source as a function of position it might look something like this: 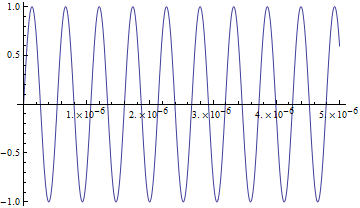 It looks like a perfect sine wave with a period of exactly 532 nanometers, where a nanometer is one billionth of a meter. The light is perfectly coherent in the sense that if you know what the field is doing at the position x = 0, you can predict exactly what it will look like at any other position just by extrapolating the sine wave. In other words, the light is correlated with itself even at large distances. But no source of light is perfectly coherent, not even lasers. A real source of light, such as from a light bulb or the sun, might look more like this: 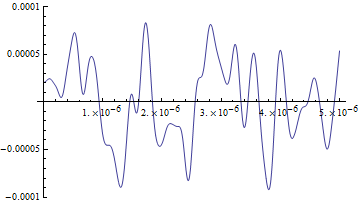 There's a lot of variation in the amplitude and the phase, and so the light is very incoherent. It is only correlated with itself at short distances, and if you know what the light is doing at x = 0, extrapolation won't reliably tell you anything about what it will be doing at x = 1 cm.  That graphic for sunlight is more or less realistic, by the way, and so you might be curious to see what a realistic graph of the output of a real 532 nm Nd:YAG green laser pointer might be, compared with the first graph of a perfectly coherent 532 nm light source. As it turns out, the graph for the realistic imperfect laser pointer would be completely indistinguishable from the theoretical perfect graph on this scale. I've only plotted a few microns worth of the field. If we define a "coherence length" which gives the distance at which the correlations - i.e., the predictability of the field via extrapolation - die off, we'd find that the coherence length of a laser pointer is usually on the order of a meter or so.

This is pretty impressive. In that meter, the electric field has oscillated millions of times. And despite that, by the time you get from x = 0 to x = 1m, only about one extra or fewer oscillation has crept in compared to a perfect sine wave. This is really monochromatic, and that's just a cheap laser pointer.

Commercial research lasers pretty trivially reach coherence lengths of a kilometer, which means they're stabilized to about 1 wavelength of error in 109 cycles. Stabilizing a laser much more than that starts to take some effort, but careful experimenters regularly work with lasers which have coherence lengths of hundreds or even thousands of kilometers, or about 1 part in 1012.

The state of the art is better still. Recently a group out of Braunschweig, Germany and Boulder, Colorado has published work on a very well-stabilized laser with a high-finesse cavity made of monocrystaline silicon. As far as I know their result is a record for a laser, achieving a stability of a staggering 1 part in 1016, which is equivalent to a coherence length of a billion meters - several times the earth/moon distance.

How all this is done is a story for posts in the future, but the bare fact that such amazingly pure light is possible is a triumph of optical science.