"Standing down on this one" - was the first line of the email I read at about 7 am this morning as I rolled over and grabbed my phone, having had about 4 hours of sleep.
After staying up past 2 am to run some numbers, we would, after all, not be submitting a request for Director's Discretionary Time override on the Hubble Space Telescope to do a Target of Opportunity urgent observation of a suspected transient in Andromeda.

This ended a fun 12 hour period of Astronomy in Action, bits of which occasionally frothed over onto social media, as Real Live Astronomers blew off steam, or exchanged semi-cryptic messages through the froth of speculation and flurry of news.
It was fun and quite educational, and revealed a nifty new failure mode for one of NASA's most successful missions. 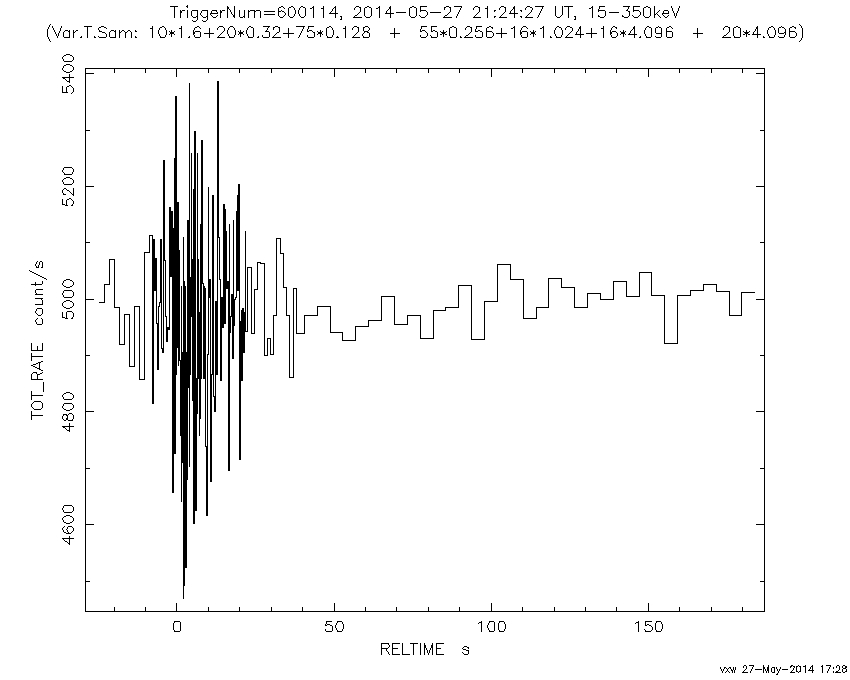 Swift has been up in space for a number of years, scanning the sky for high energy transients. Brief bursts of gamma rays or high energy x-rays that appear randomly on the sky as a star dies or something gets eaten in the worst way.

A lot of the Swift activity happens fast, on time scales of seconds, or even milliseconds, and the game is to catch it and respond fast to see what is happening.
The satellite has indigenous capability, a small x-ray telescope with coaligned small ultraviolet and optical telescopes and can swivel and point very fast and autonomously.
Signals from space are processed, responded to and and sent on automatically, with humans stepping in later at leisure.
The robotic process is imperfect, and deliberately errs on the side of caution, namely, if in doubt, check it out.
eg. GCN 16331: "The Fermi Gamma-ray Burst Monitor (GBM) trigger 422752719/ 140525971
at 23:18:36.74 UT on 25 May 2014, tentatively classified as a GRB, is in fact
not due to a GRB. This trigger is due to local particles."

I am one of many people who subscribe to the GCN alerts. While I have been a co-author on a number of gamma-ray burst related papers, it is not my primary field, and so the alerts are piped directly into a separate mailbox - it currently has 7951 entries.
I keep them in case I need them, I have the primary data and links for many recent alerts in case they become interesting, but most I will not be chasing after.
In practise I rely on my social network to alert me to which bursts might be of direct interest to me...

So... little after 6 pm Wednesday evening I had some dead time and flicked over the nets. I caught a note by Bob Rutledge on an Astronomer's Telegram about a transient in M31, which sounded intriguing.
Bob has a good sense for what might be hot.
Glanced at it - imaging detection in x-ray, marginal significance.
Hmmm - whatev...
Then I caught the next round of chatter, between Bob, Derek Fox and Julianne Dalcanton
- the position is coincident with a globular in the outskirts of M31.
Wow!
That woke me up.
This was likely to be interesting.
IF it was real.

Remember, the detection was marginal.

So, what could it be?
Well, recounting asynchronously the next 90 mins or so:
- the globular in question is old, massive and blue - ie it is metal poor.
That is good.
The globular (B045) has a known x-ray source, known to vary by ~ 10% - proposed as a black hole candidate.

So, did we just see an x-ray flare from a known x-ray binary?
That'd be ok, but nothing incredible.

Swift's initial estimate for the x-ray flux from this source was very high, more than 100 times higher than normally.
That was strange.

A lot of speculation developed early that this was then either:
1) a normal low mass (black hole?) x-ray binary just flared to extremely high accretion rate
2) or a ultra x-ray binary with an intermediate mass black hole switched from a low state to a normal full rate accretion
- both are interesting and worth observing, but not a "drop everything and go look now"
- both options typically develop slowly and are easily tested observationally from, eg. emission line spectroscopy.

Or it could be something funkier, like a magnetar burst - this actually looked like a possibility; or a jet wiggle from a microquasar (unlikely).

However, none of these models really fit the data - they approximately fit the data, but the time scales, spectra and hard x-ray flux were just not quite right - if this was what was happening it was quite unusual.
This is really where astronomer actions bifurcated.
A lot of people stopped at this point, figuring this was just a variable x-ray binary.
It wasn't, it was a non-varying x-ray binary.
If there had been real variability, then in detail it was really not consistent with normal x-ray variability. That is what made some people look at this close and fast and get speculative.

So, could it be something else.

Swift is designed to detect gamma ray bursts.
Now, this was a hard x-ray flare, really, and if it had been a GRB in Andromeda it would actually have blinded the satellite.
But, GRBs are beamed, quite narrowly, we think. And normally we see them from far away because we see them beamed at us. So we only see a small fraction of all the GRBs that are out there.

Theoretically, there ought to be an additional "side glow", much fainter, only visible for very nearby GRBs. And since GRBs are quite rare we would not expect to see many nearby.
On any given day, the odds of seeing a GRB in Andromeda might be roughly of the order of a billion-to-one. But, over a decade, the odds of seeing a GRB in some very nearby galaxy is more like O(1/1,000) - which is just unlikely, not impossible.

And if it is a GRB, we have to go look, Right Now.

This is the game.
The risk is, a lot of the time you are wrong.
Maybe most of the time.
But you can't not look if there is a chance that an event is something like a very nearby GRB
- in this case it'd have to be a "short GRB", thought to be due to the coalescence of two neutron stars, spiralling in through gravitational radiation emission. We'd have caught the side glow, not the main burst, which would have been beamed away from us.

A merging neutron star binary would require getting radio data follow up, not just optical, and looking to see if there was coincident neutrino emission, and gravitational radiation!
The big gravitational radiation detectors, LIGO and VIRGO are down for engineering upgrades, but there was a tiny chance they might be switched on for testing (not really, but someone had to ask on the off-chance), but GEO600 was on "Astrowatch", and as it happens was in fact on and "locked" - the lasers were interfering and sensitive to gravitational radiation.
If you want some interesting science sociology, track the gravitational wave chatter on the #GRBm31 hash tag - got intense then very quiet very fast.

A big decision was whether to go for Hubble (duh!) observations. I expect several groups were putting together proposals Wednesday night, I was expecting someone in California to get in first, but the HST Director would see all proposals at the same time in the morning... fortunately the followup analysis came through and we stopped everything before sending a request in.
And that was that.

It was good fun, haven't done one of these in a while.
Read Swift_Phil for the gory details of how it went wrong, including the unfortunately timed thunderstorms in DC knocking Goddard Space Flight Center out. It was all very rational. It was a "correct failure mode", it "failed safe". Normally the whole thing would have been caught much earlier, in minutes, not hours, and the alert called back before getting that frenzied.

Consider this: in the Milky Way, there is M15 - a massive, blue, metal poor globular cluster. It has a tightly bound neutron star-neutron star binary (a binary pulsar in fact PSR B2127+11C - one of my favourites) that will coalesce in a couple of hundred million years, presumably becoming a short GRB. It is right next to a low mass x-ray binary in the cluster (two in fact - yes there are two LMXBs on top of each other in M15).
When it goes off, as a GRB, it will look like a gamma ray burst in a GC superposed on a bright steady x-ray source - quite like the B045 scenario.
It was not crazy - just a long shot.

But, if it was what was happening we had to try to look, to have let it slide and then realize we missed it would have been unforgivable.

Heavy Metallicity on the retraction

Swift prompt position reports - how it all started...