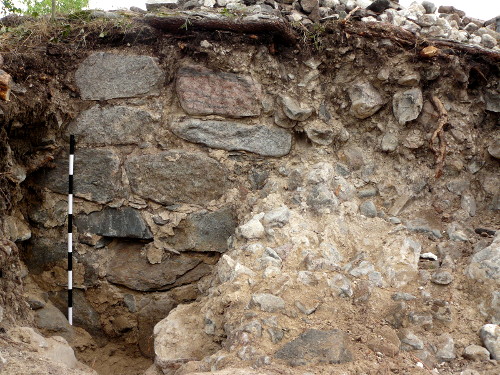 After four days of rubble removal in trench A, we found the south wall of Stensö Castle's northern tower. Note how the wall facing (left) ends, and a pale mass of wall core (lower right) emerges out of the tower. This is the castle's previously unseen western perimeter wall. 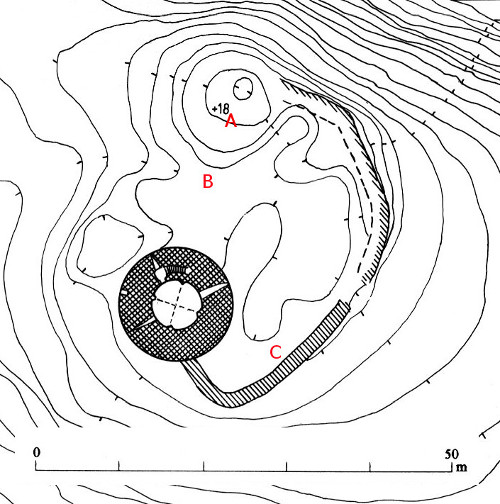 Trench B is probably not quite on the line of the western perimeter wall, but Andreas and Malin are getting loads of varied animal bones out of it, and thus contributing to answering questions of the lifestyle at the castle. 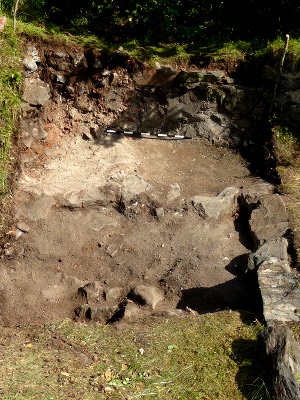 Trench C. Note the lines of stone blocks forming a right angle, possibly for a house foundation, and the pale remains of a mortar layer.

In trench C we are now rid of the rubble, and so Ethan, Nora and Ola have switched from quick removal digging to painstaking stratigraphical excavation. A line of stone blocks reminiscent of a house-foundation crosses the trench at right angles to the similar line that was visible already before we broke turf. Between the new stone line and the perimeter wall is a layer of caked mortar, similar to one excavated by my colleague Lars Norberg at Nyköpingshus castle, and interpreted by him as traces of a construction or refurbishment event. Lars visited us the other day with a big bag of cookies and gave the students a great impromptu lecture about contract archaeology and the upcoming Cheese Link, Ostlänken, a major railway construction project that I hope will give my students employment opportunities in years to come.

And I have to brag about those students. I was pleased that so many signed up. But I was even more amazed when they told me that every one of my Umeå students from last autumn semester who is still on the programme has signed up. Fanny even came along on the dig despite leaving the archaeology programme for other subjects after the autumn semester. And they all work efficiently and intelligently, they shop for food and cook and do the dishes according to our equitable schedule, and they're friendly and cheerful all around. 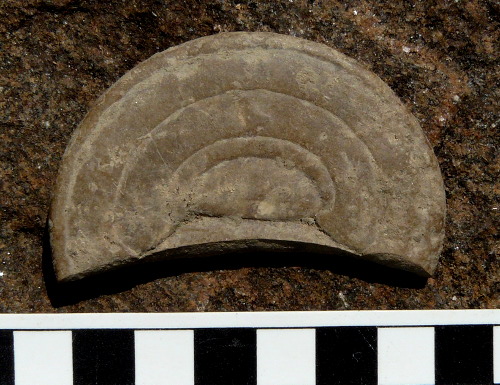 Sculpted limestone or stoneware disc, 65 by 5-6 mm, from trench C at Stensö Castle. What was it for?

Anyway, trench C: under the mortar layer is grey clay with bones, and working at it yesterday I flipped up this funny little sculpted brown disc. The material is either limestone or a very fine stoneware. One face is flat and featureless. The abstract relief on the other face forms two concentric volutes around a skewed almond shape. The pattern can't have been mirrored in the missing part as the bits that are visible reach across the symmetry/diameter line. I have no idea what it is. My friend and Fornvännen colleague Göran Tegnér says it might have been lid for a hypocaust flue only those are usually metal. Project advisor Lotta Feldt of the County Museum suggests that it may be a modified markleka, a calcium concretion common in the post-glacial clays of Östergötland. Any ideas, Dear Reader?

Finally, note the measuring rod in the fieldwork photographs and the scale bar in the find photograph. Both were 2007 gifts from Aard reader Twoflower! Been years since I saw him around the blog. Hope he returns.

Update next day: I've written about the Stensö excavations in Swedish for the County Museum's blog.

I've seen thing that very vaguely look like that but considerably smaller, (operating from memory) roughly 20-35mm, spelunking in limestone caves. I have always assumed that they occur where a relatively soft layer of limestone is exposed to long term drips from the roof. A small dish shaped disc forms as the calcium tends to move toward and build up around the edges and collect ever more water. This is similar to how a drop of coffee on a counter top will form a ring as it evaporates.

Smaller drips in following years/seasons/decades could account for the interior rings. I've seen some of these discs break off the surface of the softer surrounding rock when the disturbed.

I also suspect that the disk might not have been complete circular shape. Rather there was a larger raised disk and this one formed beside it. This might be the result of a drip migrating with time and changing weather.

One way of telling if this is natural might be to find one undisturbed and still attached to the substrate. Check the concentric rings for level. For obvious reasons the rings will be far more precisely level than what might be considered typical of underground structures.

An interesting but messy diversion might be to try to recreate the design with coffee and a very level table top by forming a large coffee ring and repeatedly add more coffee after it dries. Then forming another beside it.

Unfortunately I suspect I've doomed an undergrad to many months of playing with coffee and a psychopathy associated with warm beverages. The up side is you get a thesis written in purple and green crayons on paper bags, and a student obsessed with keeping counter tops clean. So there is no down side.

So the expedition has already been successful.

From today's edit of the Swedish Wikipedia article on "marleka", it's seems you've made up your mind.
I think you're right. Was there a Mediaeval collector of interesting-looking stones?

Yeah, I'm pretty sure this weird thing didn't end up in the castle bailey by chance.

Great pictures, thank you! So are you thinking the trench B wall kind of bulged out like the other wall between the towers rather than running in a line between? Your disc is a pretty little thing; even if it's natural I can easily imagine someone picking up because it's beautiful or useful for holding little things. I would do so myself.

Concretion all right- we have them in post glacal clays on this side of the pond too.

Very cool geofact(?)! Had me sceptically Googling for a while but it seems that you are right. Out of curiosity - is it internally laminated? What kind of structure does a cross-section have under the microscope?

To the naked eye, it is internally homogenous except for a very few included grits (pale and dark ones), and looks a lot like stoneware. I have no suitable microscope. But I can bring the thing to Umeå!