ARCHIVE: 25 Things You Should Know About the Deep Sea: #8 Processes & Patterns In the Deep-Sea Are Linked to Surface Production 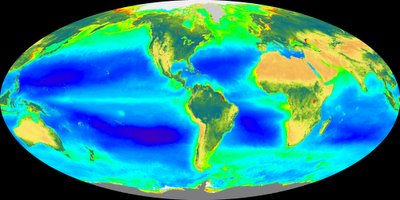 Light does not reach the deep-sea floor. This precludes photosynthesis and thus primary production (except in chemosynthetic communities like hydrothermal vents and methane seeps). The lack of primary production on the deep-sea floor results in these communities being intimately coupled to the production of food at the surface by phytoplankton. What fluxes down to the deep sea is a combination of decaying animals (from plankton to whales), fecal pellets, and photosynthetic material (phytoplankton to seaweed). This material (carbon compounds) is consumed by deep-sea species and either returned to the water column as carbon dioxide from respiration or enters into the sediment. This relationship between the seafloor and surface is termed benthic-pelagic coupling with the actual process of carbon movement from the surface to the floor called carbon flux. Carbon flux and benthic-pelagic coupling both fit into the broader concept of carbon cycling with terrestrial plant production and the consumption of fossil fuels.

Overall, approximately 25% (16 Gt/yr) of carbon fixed by phytoplankton is thought to sink to the ocean interior (Falkowski 1998). Compare this 16,000,000,000 tons to the total carbon dioxide emissions, 25,167,070 tons, from consumption of fossil fuels for 2003. This exemplifies the importance of a better understanding of how deep-sea benthic communities contribute to benthic-pelagic coupling in elucidating the dynamics of the carbon cycle.

As one would expect patterns and processes in deep-sea communities are largely controlled by the magnitude and variability of organic carbon flux from the euphotic zone. To some extent the magnitude of flux mirrors the amount of total production at the seasurface which typically decreases with distance from land. The map above shows where the highest ocean production (warm colors). The amount of carbon arriving at the seafloor also depends on the the depth of the water column. The longer the material is in the pelagic zone (increasing depth) the more likely it is to be consumed by pelagic species or degraded by bacteria in the water column. Several studies have shown a variety of features to be linked to this flux including:

Studies also demonstrate that deep-sea communities can respond to pulsed fluxes of primary production from the euphotic zone at time scales of less than 2 weeks (Graf 1989, Gooday et al. 1990, Smith et al. 2002) but over geological time periods as well (Cronin and Raymo 1997)

ARCHIVE: 25 Things You Should Know About the Deep Sea: #4 The Deep Sea Has Extremely High Species Diversity

It had been assumed for a century before that the deep-sea fauna was depauperate, and prior to then that the great depths were essentially sterile. These ideas were largely a carry over from Edward Forbes in the late 1800's, who proposed the azoic hypothesis for the deep sea. Interestingly, his…

ARCHIVE: 25 Things You Should Know About the Deep Sea: #7 Most Deep-Sea Organisms Are Miniatures of Their Shallow Water Relatives

In one of the earliest papers on the deep-sea fauna, Mosely (1880, p.593) noted, "Some animals appear to be dwarfed by deep-sea conditions." Almost a century later, Hessler (1974) noted that "individuals of certain taxa are routinely so small that they are of meiofaunal size." Thiel (1975, p. 593…

Is there springtime for the Abyss?

Think of the changing seasons around you, and the way plants and animals respond to these changes. Trees change color in response to decreasing light levels. Birds migrate, and bears go into hibernation as winter approaches. So, we wonder, what are the seasonal cues in the abyss? Are summer days…

Can the Deep-Sea Mitigate CO2 Rise and Global Warming?

In the last 10 years, the average temperature of the earth as increased by 0.75 degrees Celsius. In less you have not read a newspaper or watched the news in the last 15 years, you would know that a majority of scientists have linked this to increasing C02 emissions from the burning of fossil…

The lack of primary production on the deep-sea floor results in these communities being intimately coupled to the production of food at the surface by phytoplankton.

Does "lack" imply nonexistence of primary production on the deep sea floor? Cause we know that's not the case -- chemoautotrophs are necessary for many deep sea environments.

Also, the last section of your post, following "including:" is not rendering correctly in my browser (Firefox 1.5). The text is there, but I can only read it if I highlight it with my cursor.

For most of the deep sea, probably greater than 95%, there is no primary production. As you note there are exceptions, hydrothermal vents and methane seeps, where chemautotrophy drives an ecosystem. As pervasive as they are there impact on total food input for the deep sea is quite low. Thanks for the heads up on the wording will fix.

The most exciting phrase to hear in science,

All truths are easy to understand...