Nyamuragira starts off 2010 with an eruption

It didn't take long in the new year to get started! 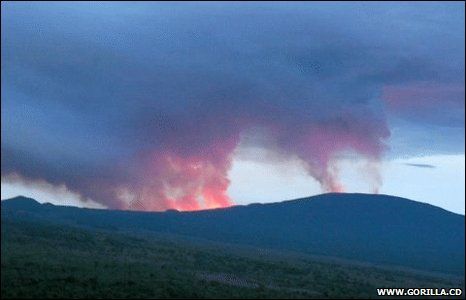 Nyamuragira in the Congo erupted to start off the new year, producing explosions and lava flows. The flow are moving down the southern flank of the volcano. The eruption started with loud, concussive noises at 3:45 AM that startled rangers at the National Park that surround the volcanoes Nyamuragira and Nyiragongo. It appears that there was some part of the eruption that was either fire fountains or strombolian as the rangers describe the early events as "fire with sparks flying". The lava flows from this eruption could threaten populations of endangered chimpanzees and great apes that live on the slopes of the volcano in Virunga National Park. However, unlike eruptions of Nyiragongo that reached the city of Goma, this eruption (so far) is into fairly unpopulated areas.

Nyamuragira is a relatively active volcano, producing lava lakes and flows - some of which reached as far as 30 km. The last eruption of Nyamuragira was in 2006, a VEI 2 event that produced lava flows on the south flank, similar to what is occurring now. That eruption lasted about a week, but other eruptions since the turn of the century lasted upwards of months.

I've tried several times to post the information about this eruption (and also about a new eruption at Piton de la Fournaise at the same time) in the previous entry, but got a message "your comment is being approved", something that happened already several times in the past. These comments "being approved" actually never appear in the list of comments.
Anyway, Piton de la Fournaise (RÃ©union island, Indian Ocean) erupted spectacularly on the afternoon of 2 January 2010 (local time). More detail here: http://ovpf.univ-reunion.fr/

Thanks for that Piton de la Fournaise link ... and sorry for the spam comment filter being overzealous. I'll fix that right away!

That goes for everyone: if your comments say they need "approval", its always good to remind me to check the spam filter. The system at SB doesn't actually tell me when there are comments awaiting approval.

Erik, a little primer on the unusual alkalic nature of the Nymuragira lavas, and the resulting implications, may be useful for the non-petrologist/volcanologist readers.

I have read the lava on this area is very fluid. Is that Alkalic?

Good suggestion ... I'll come up with something and post it later this weekend or Monday.

It sure didn't take long, did it?!

I am also an "armchair" geologist/volcanologist (even if I did climb Lassen twice) and an avid rockhound. Anything about the chemical structure of lava/hardened rock, crystals, etc. I am interested in. I plan on boning up on this stuff. I took geology years ago and I remember very little. Shouda kept up on it. :-)

Look like we have another volcano that wants to join in the party. Galeras just erupted with ash to 40,000 feet.

The BBC has some footage of the eruption, including what look like lava fountains, here.

By clicking my name on this comment (avoiding the crazy SB spam filter here, which really does need to be improved) will get those interested to a post on the region right around Nyamuragira.

I'll just add this: I once had a Land Rover with front seats copped from a small plane (and then modified) that found its final resting place on the slopes of Nyamuragira. Also, the one time it snowed on me in Central Africa was in that volcano field.

I believe that may be an interesting point, it made me suppose a bit. Thank you for sparking my thinking cap. Occasionally I get so much in a rut that I just feel like a record.