Philip Tobias passed away this morning, according to a mutual friend. I've not heard any details.

Tobias is the most important hominid anatomist to have lived in the 20th and early 21st century, having taken the chair originally established by Raymond Dart at Wits University. He literally defined several of the hominids, being the anatomist to author the official diagnosis of several species. He was also a human rights champion, an excellent poet and decent singer and performer, an excellent teacher, a great friend, a strong and central personality in human evolution and unbelievably demure and humble for a man of such stature. 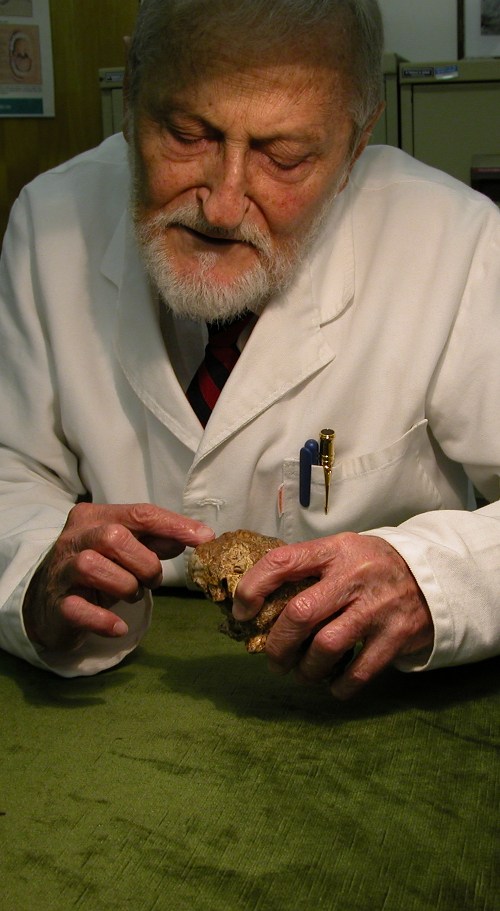 I remember the first time I met him. I was standing in the lobby of the Peabody Musuem, where we were hosting an LSB Leakey Foundation Event. I had just seen off Gordon Getty and his staff who were heading for lunch, ridden down the elevator with Yo-Yo Ma, I'm pretty sure the Presidents of two or three countries were milling around and some other stuff was going on when Mary Leakey and Philip Tobias walked up to me. I instantly dropped all the other names and gave them my full attention.

"We heard you might be able to drive us to the bookstore," one of them said. "Harvard Square is meant to have some good ones."

I thought for a moment and it occurred to me that I might not be a normal graduate student because I hadn't soiled myself yet. Truth is, I wasn't, having had a normal live before I started the project of Piling it Higher and Deeper.

"I can," I replied. "My pickup is out in front, but it has a miniature cab. One of you will have to ride bitch."

They walked to the bookstore.

The last time I met Philip was in his lab at Wits. I've told part of that story before, so I won't bother you with it now.

RIP Philip. Thank you for everything.

Born in Africa: The Quest for the Origins of Human Life by Martin Meredith examines the history of human evolution studies, focusing on Africa, and provides a comprehensive overview of the conflict between different researchers, different points of view, and sometimes, different evidence. It is a…

Self Comes to Mind

There's no way in hell I deserve to be on the stage at this incredible event, but I'm so honored to be included: Yo-Yo Ma performs the world premiere of Self Comes to Mind, a musical composition by Bruce Adolphe, composer in residence at the Brain and Creativity Institute and resident lecturer of…

In 1978, a paleoanthropological team including Mary Leakey, Richard Hay, and Tim White made a startling discovery at Laetoli, Tanzania; in a bed of volcanic ash that would later be dated to about 3.5 million years old were the footprints of ancient hominids. The preserved trackway, found to contain…

I just found another great blog through a link from somewhere, Opinionistas. This is the blog of a 27 year old associate at a Manhattan law firm. Well, former associate because she just quit her job to write full time after her blog became a huge hit (a million hits in 9 months) and got a ton of…
Advertisment