It's the Heat of the Night

is a new book on global warming produced by Climate Central which contains ...

...Sixty easy-to-read entries tackle such questions as: Is climate ever “normal”? Why and how do fossil-fuel burning and other human practices produce greenhouse gases? What natural forces have caused climate change in the past? What risks does climate change pose for human health? What accounts for the diminishment of mountain glaciers and small ice caps around the world since 1850? What are the economic costs and benefits of reducing carbon emissions?

Robert Krulwich at NPR pulled a nice graphic out of the book to exemplify one of the topics covered. Have a look: 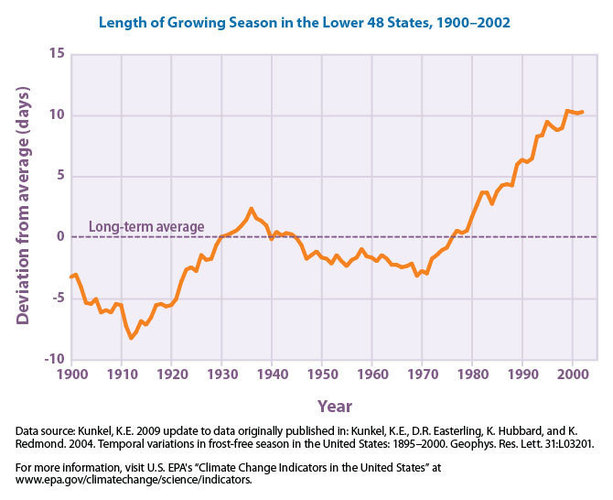 The reason for the longer frost free periods is primarily increased warmth at night, when the last and first frosts tend to happen. This, in turn, is the result of an atmosphere that holds more of the heat that would normally radiate out into space. This was predicted, it happened, and there you go.

Warning: This graph should not be used for developing your own local gardening plans. The lengthening of the frost free season is highly dependent on geography. Your mileage will vary.

Hey, if you want a free chapter from the book, click here to download a PDF courtesy of the National Center for Science Education.