Don't Write off Fermilab Yet!

"By early 2011, [Fermilab's Tevatron] will have recorded enough data to either find the Higgs or rule it out. -New Scientist, August 2009

Sure, there's a whole lot of well-deserved hoopla about the LHC, the world's #1 particle accelerator in terms of energy! But don't forget about #2, Fermilab's Tevatron, which also holds the honor of being the first place I ever worked in physics! 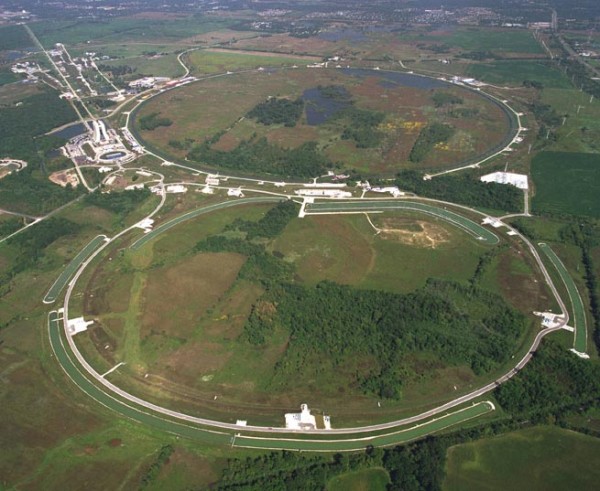 Fermilab has been operating since the 1970s, and has been responsible for many of the most outstanding discoveries in the history of particle physics. Remember the standard model?

The standard model tells us that the most fundamental things in nature are the things that make up normal matter (six quarks and six leptons), the things that carry forces (the four gauge bosons), and the thing that gives everything else mass (the Higgs). This was first proposed and worked out in the late 1960s/early 1970s by Steven Weinberg and others, and has been the most rigorously verified physical theory ever!

How has Fermilab helped? For starters, Fermilab's was the accelerator where the bottom quark, top quark, and tau neutrino were discovered. It's the place where CP-violation, an intrinsic difference between matter and antimatter (and the thing that allows our Universe to have more matter than antimatter), was first directly observed, and it's the only place that's ever precisely measured the masses, lifetimes and widths -- or intrinsic uncertainty of masses -- of the highest energy particles in the Universe. 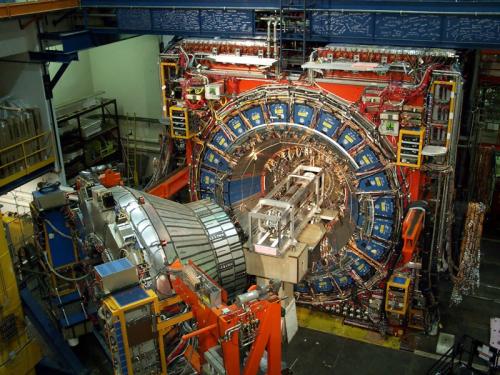 Not a bad career at all! But Fermilab isn't done yet, not by any stretch. You see, Fermilab -- much like Aesop's tortoise -- still has a shot to win the race to find the Higgs!

Although they're "only" colliding particles at 2 TeV (as opposed to 7 TeV for the LHC), Fermilab's detectors are very sensitive to the signatures that a Higgs boson will leave behind. By 2011, the Tevatron (the name of the accelerator at Fermilab) will have enough events that it should either find evidence for the Higgs boson... 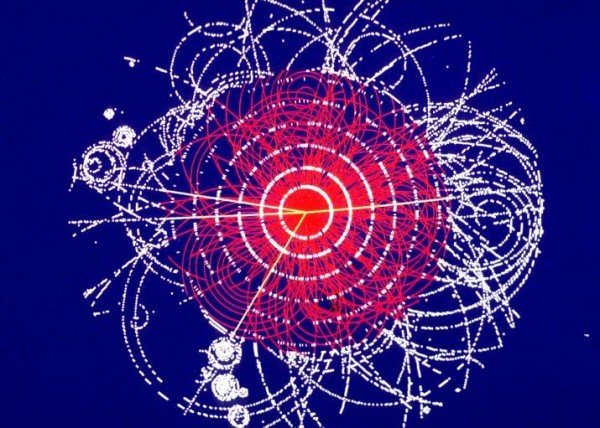 ...or it should be able to declare that no evidence was found for the Higgs, and it can start placing real, meaningful limits towards ruling it out! In fact, thanks to Fermilab, we can already say that if the Higgs exists, it isn't in the mass range below. (Image credit: Gregorio Bernardi.) 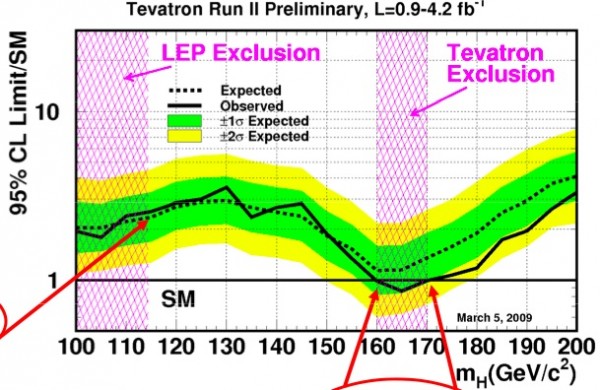 So by the end of 2011, just from Fermilab (regardless of what the LHC does), we should find the Higgs if it's lighter than the top quark! (And, FYI, our theories say it should be.)

Fermilab's been at this a long time, and while the LHC is getting all the press, they're not the only ones in the race! And just so you don't forget, here's a link to the Fermilab rap music video; enjoy!

And I mean it; don't discount the tortoise!
Tags
Physics

How Sure are we of the Higgs?

"`It's quite hard to destroy the Earth.' Does that statement make anyone else nervous? I mean, does that sound like experience talking?" -from the comments on the LHC at slashdot Last week, I started an open thread, giving you the chance to ask about how certain we were about the validity of…

Have we Discovered New Physics?!?!!

"Although important nuclear physics work was to go on in laboratories such as ours had become - and we had to cut down to a lower energy group - it was not fundamentally opening up new insights on the structure of matter. That required you to be in a higher league." -John Henry Carver Okay, before…

Have we reached the end of Particle Physics?

"The particle and the planet are subject to the same laws and what is learned of one will be known of the other." -James Smithson The entirety of the known Universe -- from the smallest constituents of the atoms to the largest superclusters of galaxies -- have more in common than you might think.…

I can't see a single buffalo in the aerial view.

So is it safe to say Fermilab will find the higgs before LHC if it's in the expected mass range?

Fermilab's was the accelerator where the bottom quark, top quark, and tau neutrino were discovered.

You know full well that bosons get discovered in Europe.

@2: It wouldn't be safe to bet on Fermilab without knowing more - such as what experiments were conducted and how the detectors were set up and whether you'd even bother looking for signs of a Higgs in those experiments. There's still a lot of data to process (and to check several times over). However, if they happened to run the right type of experiments and the detector arrays are suitable for the job, they may very well have the data they need. I wouldn't bet one way or the other - as I already wrote elsewhere, one possible outcome for the LHC is that the conclusion to experiments could be "we can't find the Higgs in these conditions" and ideas about the Higgs boson will need to be refined (or thrown out and replaced with something more suitable), in which case the Fermilab wouldn't find the Higgs boson either.

So... what happens if there isn't a Higgs particle? I get enough of the standard model to hurt myself, but I can't quite grasp where the Higgs fits in. And how does Higgs account for inertia (object in motion stays in motion, etc.)? I guess I don't get that part. Most other particles, we had some idea of what we were looking for when we went meandering through the masses of collisions.

Or for that matter, what does it mean if we find the Higg's where we don't expect it, e. g. at half or double the predicted mass. Can the standard model account for that, or would it mean we miss another particle that makes up the difference?

Chen Ning Yang retold the following story, "Phillip Frank said that he had spoken to Einstein one day about a certain physicist who had very little success in his research work. He consistently attacked problems which offered tremendous difficulties. He applied penetrating analysis and succeeded only in discovering more and more difficulties; he was not rated very highly by most of his collegues. Einstein according to Frank, said, "I admire this type of man. I have little patience with scientists who take a board of wood, look for its thinnest part and drills a great number of holes where the drilling is easy."

@onethird-man: The Higgs doesn't really account for "object in motion stays in motion", I'd say - you can account for that part simply by energy conservation. The Higgs mechanism tells you essentially mainly why (most) particles have a rest mass, i. e. why they still have energy even if they don't move. And the reason for that is that this rest mass is essentially the potential energy of the particles in the Higgs field.

@Mu: As far as I know, the predicted mass range comes from the standard model - hence if the Higgs boson is found elsewhere, that automatically means that the standard model is incomplete, i. e. that there have to be additional particles.

Thanks for the mention, Ethan!

"Fermilab's was the accelerator where the bottom quark, top quark, and tau neutrino were discovered. It's the place where CP-violation, an intrinsic difference between matter and antimatter (and the thing that allows our Universe to have more matter than antimatter), was first directly observed, and it's the only place that's ever precisely measured the masses, lifetimes and widths -- or intrinsic uncertainty of masses -- of the highest energy particles in the Universe."

Yes, the top and bottom quark were found at Fermilab.
However, CP violation was discovered at Brookhaven (BNL) !??

It is not in the physics books, but if you add some radiators
and a time varying field into a Gaussian field of statics to make it dynamic then Maxwell's equations of radiation applies.
Thus particles are the carriers of charge. From this the Standard Model is easily derived. As an engineer my page unwinantennas.com/ demonstrates the fall out of the above, but physicists will not accept explanations outside their own profession! Feynman states in his lectures, that what goes for statics also goes in dynamics but nowhere is this knowledge passed on in our education system. No new laws required as past laws still apply.
Regards
Art Unwin

If FERMILAB EMPLOYEES REJECTS THE MATH OF COMBINING GAUSS WITH MAXWELL, SHOWING RADIATION IS BY A CHARGE CARRYING PARTICLE AND NOT A WAVE, THEN FERMILAB HAS LOST IT'S REASON TO EXIST.

Okay, the rap video is a little overdone. I think my students would be rolling their eyes. It's all about the auto-tuning videos these days. http://www.youtube.com/watch?v=hOLAGYmUQV0/4396710 Have you seen this? Probably. My students dig it very much.