Did Leo Traynor's Troll Have Other Victims??

By now you've probably read the story of Leo Traynor's troll. The very short version: Leo, and later his wife, were stalked on the internet by a horrid troll; the horrid troll eventually started to leave horrid objects with messages at Leo's house; The troll was baited and investigated by an IT expert who could identify him as a teenager that lived not far from Leo; Leo got in contact with the teen-troll's parents, arranged a meeting, forgave him, and the troll seemed kinda sorry.

I think that's a great story and I hereby doff my hat to Leo. But, I have two gripes I want to make. Well, one gripe about some of the commenters on Leo's post, and the second, more of a question for Leo that may or may not be followed by a gripe.

When you look at the initial comments on Leo's remarkable post, you find that there are people concerned that Leo has changed the definition of Troll. Well, actually, that might be true. There is a prior and more restrictive definition of a troll on the internet. However, much as the initial use of "troll" on the internet is incorrect because actual trolls live under bridges in fairy tales, the term has changed meaning to mean any kind of intentional and repeated asshatery by people who seem to have no other function in life but to be an asshat. There are all kinds of ways to be a troll. One of these ways is to be a concern troll. Perhaps, even, to be concerned over things like the definition of words and how they have changed.

Here's the other, and more serious issue. This kid was horrid, as mentioned. Leo got off the hook by letting the kid know that he knows who he is. There will be no more trolling of leo by this kid.

But what about the kid's other victims? Do we really believe, or more to the point, do we know with certainty, that there are no other victims? The kid's parents were chomping at the bit to bring in the police, that's how mortified and horrified they were. My suggestion may have been to do just that. At least, in the case of American law (and this may not be the case in Ireland) Leo would probably have a strong influence on whether or not charges were advanced assuming that he and his wife were the only victims. If the cops were called in (and I'm not a big fan of automatically calling in the cops, what with the whole Police State thing they've got going and all that), they could have investigated further to determine if there were other victims. Maybe this kid's trollish attacks had an even worse effect on others. Maybe some of his objects and notes left at other homes were on fire or in some other way physically harmful. This kid's treatment of Leo and his family was so bad that I for one am not comfortable with the idea of having a sit down with him and then assuming that there no other victims, that there are no people out there who don't need help, who don't need to be told that it was just some punk teenager and he's been found out.

So, that's why I ask: Did Leo Traynor's Troll Have Other Victims? Anybody know? If we don't know for certain that the answer is no, then I object to Leo's approach here, as squichy feely goody oody as it seems when you first read about it.

Meanwhile there is this:

That is the facebook page of Corey James Baldridge. He is an internet troll who is stupid enough to use his real name. Here is an example of his trolling: 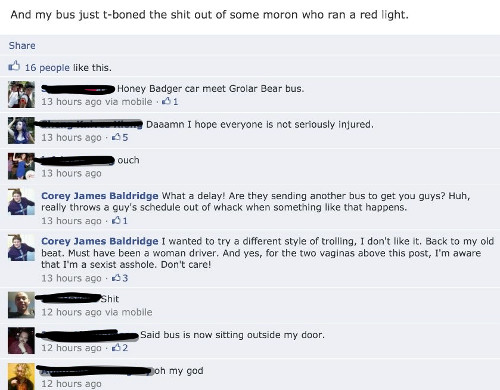 I am not sure if Corey James Baldridge is aware of the fact that in the future potential employers will be searching his name on the internet. When I hear from the people he offended that he's sincerely apologized, of course, I'll remove all this and they won't find it. Otherwise, this info is up for grabs.

I'm not sure what your point is here? Are you comparing Corey, who is being jerky, to someone who was leaving threatening messages on someone's doorstep? Because to me, that's not the same thing.

Other victims of this kid? That will probably come out at some stage because I thought part of the deal was that the kid had to go to counselling. (And I'm pretty sure he'll go in light of the parents' initial reaction.) Counsellors are pretty good at dragging out of you all the stuff you should be ashamed of and deal with before you "move on".

Chris, I've not made any overt comparison because I don't know enough about either case.

Generally Chris, this is the behavioral patterning that leads to the death-threat like bullying that the other psycho was doing, if left unchecked.

Sometimes all it takes is someone else saying, 'hey you're wrong here, sort yourself out.'

If you can't seem to make a simple conclusion like that, the way you see reality is seriously skewed, and I think, just contributing to the problem, not the solution.