Earlier this year a paper was published in the journal Nature in which a team of scientists looked at changes in storm surge potential under conditions of global warming, and they used the New York City area in their modeling. Combined with resent research adding to the growing body of data and studies that show increased storminess with global warming, this research suggests that the increased possibility of a hurricane causing a storm surge that would actually flood the subways in Manhattan is not only possible, but pretty likely to happen in the near future. Perhaps as soon as .... earlier this week. More exactly, the research predicts an increase in the frequency of what we think of as "100-year flood" and "500-year floods." In other words, more bad floods.

One study1 from 1987 indicated that modest warming over the Atlantic Ocean could increase the destructive nature of hurricanes by 40-50%. Subsequent studies showed variable results when modeling hurricane frequency or strength under warming conditions, but part of this had to do with the way models were constructed. Recently, Bender et al2 noted that earlier models showed, enigmatically, a decrease in hurricane activity with warming, but also failed to produce category 3 or higher storms, indicating that something was fundamentally wrong with the models. Their revised look at the question indicated that we could expect "...nearly a doubling of the frequency of category 4 and 5 storms by the end of the 21st century..." and they further noted that the "...largest increase is projected to occur in the Western Atlantic, north of 20°N." New York City is north of 20°N and adjoins the Western Atlantic.

Future increase in storminess is a serious problem for our society, and should be a great concern. Denying increases in storminess has also become a cottage industry within the larger anti-science climate change denialist community. A year and a half ago or so I suggested that this storminess was a matter of quality of life, and indeed, for some, life and death for our children and grandchildren, and that people who were in the business of denial of climate change today amounted to criminals with people of the future being their victims. This led to a major outcry in the anti-science climate change denailist community, threats of a law suit, a period of continuous harassment on the internet and in private, and a small number of absurd but not entirely discountable death threats against me, apparently organized by the anti-science community at one particular blog that recently came out with the absurd assertion that Hurricane Sandy was in fact not a hurricane and thus, I assume, does not count as a storm in considering the possibility of future hurricanes being larger, farther north, or more frequent, because of global warming. Those science denialists are answerable, of course, to the families of those who died in the Northeastern United states over the last few days as a result of a climate-change enhanced super storm.

The peer reviewed research at hand 3that predicted the flooding of subways in NY was produced earlier this year. From the abstract of the paper:

Storm surges are responsible for much of the damage and loss of life associated with landfalling hurricanes. Understanding how global warming will affect hurricane surges thus holds great interest. As general circulation models (GCMs) cannot simulate hurricane surges directly, we couple a GCM-driven hurricane model with hydrodynamic models to simulate large numbers of synthetic surge events under projected climates and assess surge threat, as an example, for New York City (NYC). Struck by many intense hurricanes in recorded history and prehistory, NYC is highly vulnerable to storm surges. We show that the change of storm climatology will probably increase the surge risk for NYC; results based on two GCMs show the distribution of surge levels shifting to higher values by a magnitude comparable to the projected sea-level rise (SLR). The combined effects of storm climatology change and a 1 m SLR may cause the present NYC 100-yr surge flooding to occur every 3–20 yr and the present 500-yr flooding to occur every 25–240 yr by the end of the century.

Have a look at the following graphic from the paper: 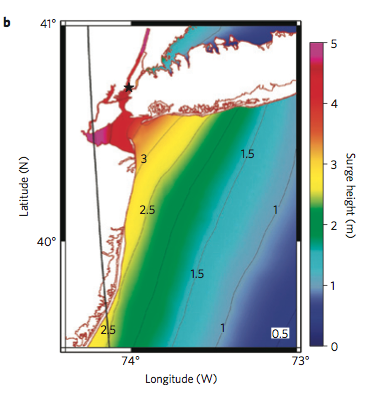 It may be helpful to briefly consider how tides work, and what a storm tide is. Tides are the warping of the ocean's surface in sync with the Moon's gravitational field and to a lesser extent, the Sun's gravitational field. Think of the tide as an elongation of the planet that travels around the earth always pointing a long end at the moon, and a secondary, lesser elongation pointing at the sun. When the two are at 90 degrees from each other, the total elongation is at its minimum, and when the two are in sync (during a full or new moon) the effect is strongest. This elongation moves around the earth over the course of a lunar month but the earth spins within that gravitational effect once every 24 hours. For this reason, about twice a day, a given spot on the earth is sitting under one or the other of the two ends of this elongation. That's high tide.

The total effect on the ocean is actually rather small at sea. But, when the elongated effect passes from sea to land it effectively bunches up the ocean against the land and you can get more tide. The height of the tide depends on the shape of the ocean basin (horizontally, as we would see it on a map), the detailed nature of the shore line, and other factors. So, we get a couple of feet of tide in Florida and 40 feet in the Bay of Fundy, normally. The height of the tide in new york city is something like 3.5 to 4.9 feet depending on the contribution of the sun's gravity. The city is built with the assumption that the ocean will go up and down by this amount, with a few more feet added to sea walls and barriers to account for waves and such.

A storm tide is mainly one thing: Additional height of the water owing to the blowing of the sea by consistent long term and powerful winds towards the shore. But there are two other factors that also raise the tide during a storm. The lower barometric pressure experienced in a storm raises the water level a measurable amount, and in some cases, the tide can be even higher if there is flood water coming down an estuary or river at a given point.

A worst case scenario involves an "astronomical" high tide (the Moon and the Sun lined up) with a strong wind blowing towards shore and a very low pressure system storm. That was Sandy the other day in New York.

The graphic shows how the harbors and bays around New York City are essentially traps for both tide and storm effects, with the Battery being caught, as it were, between a rock and a hard place, with tidal waters coming in from two directions (against a possibly flooding Hudson River).

The present study notes that earlier studies had indicated that the storm surge threat at the Battery was between 1.24 and 2.78 meters (4 to 7+ feet). The storm surge with Hurricane Sandy topped out at about 14 feet, which was about 7 feet higher than expected, so at the highest end for the present estimate for the so called "500 year flood." that's astonishing, considering that for all its strength and bigness, Sandy was not as powerful in the immediate area of New York City as it could have been.

The main outcome of this study is to suggest that the frequency of high flooding of the kind we saw earlier this week will shift, so that multi-century events occur (on average) every few decades, owing to a combination of changes in storm patterns and sea level rise.

As the climate warms, the global mean sea level is projected to rise, owing to thermal expansion and melting of land ice. ... The total SLR [sea level rise] for NYC is projected to be in the range of 0.5–1.5m by the end of the century. The effect of SLR, rather than changes in storm characteristics, has been the focus of most studies on the impact of climate change on coastal flooding risk ... To our knowledge, this paper is the first to explicitly simulate large numbers of hurricane surge events under projected climates to assess surge probability distributions.

The quoted figure shows one of the two worst-case storm surge events (out of 5000 simulations) under the 1981-2000 (observed) climate conditions, shown in the original paper. It's not storm tide (i.e., astronomical tide is not included in this figure), and it's not for future climate conditions.