Rising Sea Levels: Cause and Impact

Rising Sea Levels: An Introduction to Cause and Impact

is a new book by Hunt Janin and Scott Mandia. Janin is a writer of non fiction and scholarly books, and Mandia is a professor of physics and a science communicator who specializes in climate-related issues. 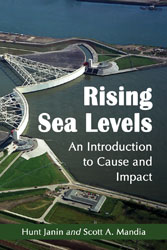 To me, sea level is one of the most interesting and important of climate related issues. Interesting because I've done archaeology at the edge of the sea, sometimes beneath it, sometimes racing ahead of it, and often, looking at changes in human settlement caused by its rise since the Last Glacial Maximum. Important because one of the most fundamental variables in human land use patterns is, well, where the land is (and isn't), and that is defined in large part by where the sea is (and isn't)!

Janin and Mandia acknowledge that the last few thousand years of human development and history occurred during a period of little or no sea level change, but now, sea level rise is a factor. They address the relationship between climate change, the hydrologic cycle, and sea level rise, discuss storm surges (very relevant to those in the northeastern US on this fine Thursday morning after the Superstorm) and the relationship between sea level and glacial ice (or lack thereof). The book is mostly organized geographically, with major chapters looking at each ocean basin forming the core of the work, flanked by background information, science, theory, and overviews of sea level rise impact and an introduction to who is whom in the field of climate change rise. There is an appendix chock full of cool stuff.

New York City has a watery past and will have a watery future. It is situated at the mouth of the Hudson River in southeastern New York State and has a fine, deep, naturally-sheltered harbor which was the keystone of its prosperity. ... The city today is vulnerable to storm surges from winter Nor’Easters ... and from summer hurricanes, as well as from the prospect of sea level rise. Much of the metropolitan region is less than 16 feet (4.8 meters) above mean sea level. It is estimated that, by the 2050s, adding as little as 1.5 feet (0.46 meters) of sea level rise to the forecast storm surges from a Category 3 hurricane which follows a worst-case track would cause extensive flooding in many parts of New York City.... areas subject to flooding would include the Rockaways, Coney Island, much of southern Brooklyn and  Queens, portions of Long Island City, Astoria, Flushing Meadows-Corona Park, lower Manhattan, and eastern Staten Island from Great Kills Harbor north to the Verrazano Bridge.

Which is pretty much what happened on Monday night, without too much sea level rise having happened yet. Obviously, this book is important...