Coon Rapids Baptist Church: Are they violating IRS law or not?

I have no idea if the Coon Rapids Baptist Church, is a real church with tax exempt status, but let's assume for the moment that they are. The question then would be, is this church jeopradizing their tax exempt status by taking and explicit stand on a certain issue and telling people how they should vote on it? Here are two photographs I snapped this morning: 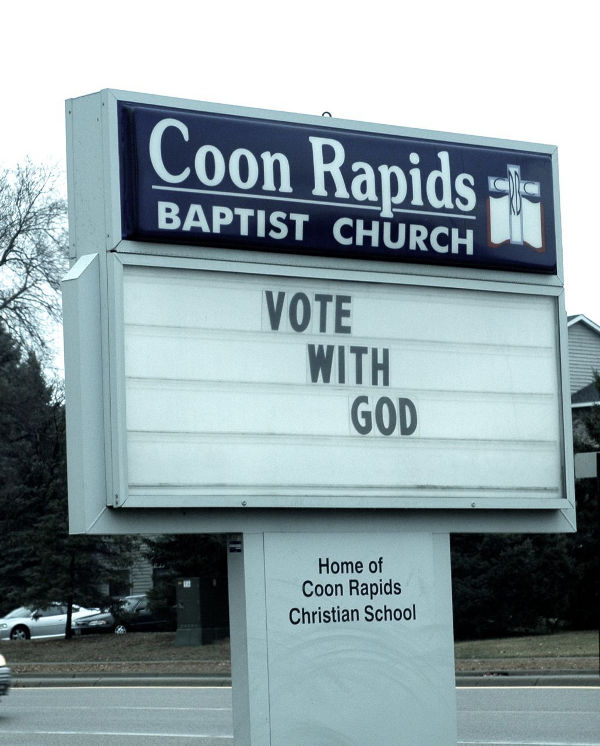 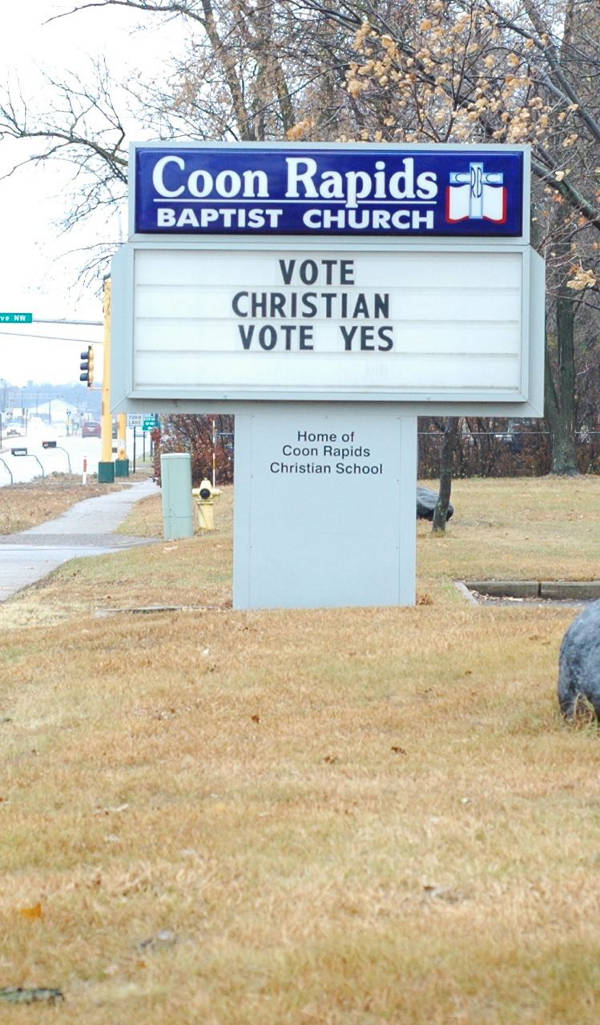 Clearly the church is saying that people should vote a certain way and clearly this is being done at a time rather close to the election. But, is this a violation of church-state separation?

Here is a document from the IRS (PDF file) that lays out the rules. Most of this is about candidates, not issues. Churches can take a stand on issues, but not if that stand links to candidates. So, for instance, a church taking an explicit anti-Obamacare position in the present election is probably violating IRS regulations. In Minnesota, the "Yes/No" vote being referred to here is an amendment to limit marriage to opposite sex couples, to be added the constitution. Almost every candidate has taken a stand on the issue, and DFLers (those are Minnesota Democrats) say "vote No" and Republicans say "vote Yes" pretty much down the line.

Personally, I think they are probably not violating IRS rules, but I also think the IRS rules could be revised. I think churches should not take positions that tell people how to vote at all, on candidates, and on issues. What do you think?

I think it's time that churches were free to endorse issues and candidates just like everyone else in this country. They should be free to speak out and encourage their parishioners as they see fit. There should be as few restrictions on speech as possible.

And I think they should pay taxes, just like everyone else. Then no one has to worry about whether there is a violation of any IRS rule.

Right, in fact, this is already true! They are totally free to endorse whomever they want. And pay taxes.

The first sign is sufficiently ambiguous to be legal. Fred Clark of Slacktivist has argued that supporting marriage equality is the Christian position to take on the issue, though this is a minority view, and evidently this church disagrees with Clark.

The second one qualifies as lobbying, according to the linked brochure (p. 6): "Legislation includes action ... by the public in a referendum, ballot initiative, constitutional amendment, or similar procedure." By itself, it is not enough to violate the substantial part test for whether the lobbying is excessive (churches are forbidden to use the expenditure test). But if this church is engaging in other lobbying activities, then this sign should be considered in whether the lobbying is excessive.

What's frightening are the answers I often receive.

To put it another way, I think all churches should have their tax exempt status revoked. That way, they will not be burdened by having to worry about IRS compliance.

Speak your mind, pay taxes. Just like the rest of us.

I agree that there should be no religious tax exemption, but I feel I should point out that tax-exempt churches are allowed to electioneer on issues... just not candidates.

Just as a first step I would like to see churches have to be proper non-pofits and fill out all the paper work and accounts non-profits have to. Maybe if we did that some of them would opt to pay taxes!
The violation there or not is moot, the IRS are doing nothing.