The Disappearance of the Rainforest of the Sea 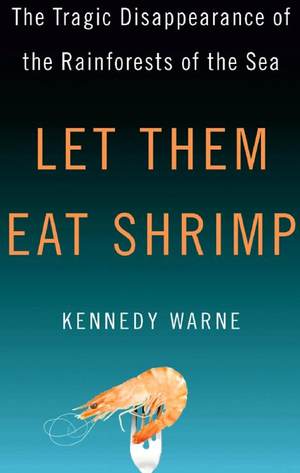 Let Them Eat Shrimp: The Tragic Disappearance of the Rainforests of the Sea

by Kennedy Warne has been out for about a year, but if you've not seen it you may want to have a look at it. Warne, editor of New Zealand Geographic magazine, is a naturalist who writes about the embattled mangrove swamps, which are a key part of many oceanic ecosystems as well as local and regional economies.

"What’s the connection between a platter of jumbo shrimp at your local restaurant and murdered fishermen in Honduras, impoverished women in Ecuador, and disastrous hurricanes along America’s Gulf coast? Mangroves. Many people have never heard of these salt-water forests, but for those who depend on their riches, mangroves are indispensable. They are natural storm barriers, home to innumerable exotic creatures—from crabeating vipers to man-eating tigers—and provide food and livelihoods to millions of coastal dwellers. Now they are being destroyed to make way for shrimp farming and other coastal development. For those who stand in the way of these industries, the consequences can be deadly.

In Let Them Eat Shrimp, Kennedy Warne takes readers into the muddy battle zone that is the mangrove forest. A tangle of snaking roots and twisted trunks, mangroves are often dismissed as foul wastelands. In fact, they are supermarkets of the sea, providing shellfish, crabs, honey, timber, and charcoal to coastal communities from Florida to South America to New Zealand. Generations have built their lives around mangroves and consider these swamps sacred."

This is complicated. Mangrove habitats have a distinctive set of plants and animals and a typical set of ecological systems that reside in them, and are distributed around the world everywhere that is not too cold, where the continents meet the seas. But each region is different in the exact link to inland and oceanic system and the relationship between traditional human societies and natural resources. In addition, scientific, conservation, and political interests and stakeholders make up myriad stories of involvement. Warne deals with this diversity in Let Them Eat Shrimp

by producing over a dozen separate essays chronicling his own investigations in disparate locations around the world, and in so doing weaves a rich tapestry made up of mud, funny looking trees, edible animals and the people who eat them, the natives, nations, scientists and other interested parties. Global warming, sea level rise, globalization of the food supply, indigenous rights, and numerous personal stories are all part of the weft and warp of this complex cloth. I'm actually thinking of using a few chapters of this book in an upcoming Anthropology class.

I'm sure you've experienced this: You are at the grocery store, or in a restaurant, faced with a set of choices as to which vertebrate or invertebrate life form you will chose for your dinner. You left your handy dandy reference card that tells you which sea food to avoid, which sea food to eat, in order to do the least damage to the planet. You instinctively know that this is a rather complicated problem with many factors involved many of which you can't even imagine. Read this book, then you can imagine, even know about, some of them!

"The question arises...What can we do to help reverse the mangrove decline? I suspect that our greatest contribution, as individuals and communities, is to be responsible consumers, aware that our economic choices ahve global consequences. We can demand that suppliers and purveyors demonstrate that the seafood we eat comes form sustainable sources, and we can vote with our palates and pockets if it doesn't.

Furthermore, we can insist that food be not just ecologically sound but socially fair--to the extent that fairness is possible in an unequal world. We can refuse to give our business to companies that are known to trade in the marginalization of the poor. "