The nearest supernova of our lifetimes turns 30, and still shines (Synopsis)

"When a star goes supernova, the explosion emits enough light to overshadow an entire solar system, even a galaxy. Such explosions can set off the creation of new stars." -Todd Nelsen

In February of 1987, the first light from a supernova some 168,000 light years away was observed on Earth. It became the closest supernova to be observed since the invention of the telescope. As a result, it’s taught us more about massive star death, ejecta and supernova remnant evolution than any other object in the Universe. 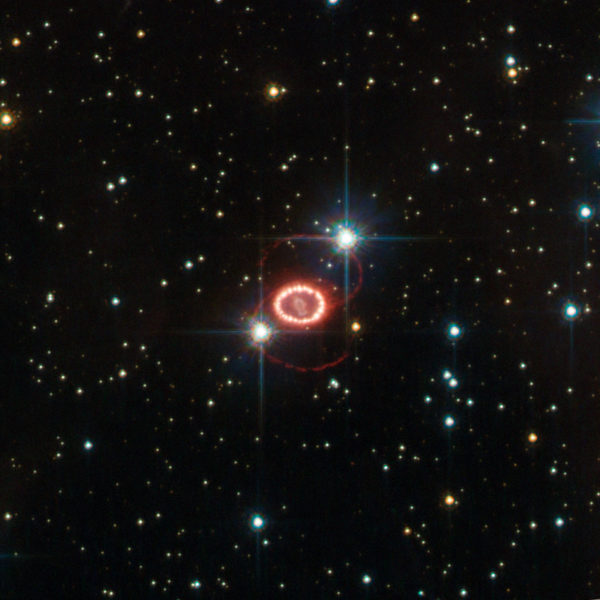 The two loop-like structures, identified in this Hubble image from five years ago, have taught us a tremendous amount about the final life stages of a pre-supernova star. Image credit: ESA/Hubble & NASA.

Illuminated outer rings showcase ejection events that occurred prior to the final death of the star; continued brightening teach us the rate of expansion of the supernova remnant; the lack of a neutron star at the core teaches us about the power of dust to obscure even radio light from this object. Perhaps most interestingly, neutrinos were observed from this supernova, arriving nearly three hours before the light did, confirming that they move through a star unimpeded, unlike light.

Come get the full story in some amazing pictures, videos and under 200 words of text on today’s Mostly Mute Monday!

What would cause the SN to form a disk of material from the center of the star (assumed center) with ejected material symmetrically expanding along the objects axes? Why not explode in the form of a spherical apparition?

It can do. But the flaring happens easiest along the equator and if it's "gentle" enough, you can get quite a good disc.

But in many cases, the "ring" isn't really a ring. It's the denser bit of a sphere: the bit tangential to your LOS and the sphere's surface.

Because it's thicker along the LOS pictures will show a ring because of that more dense illuminated matter.