Can't we do something with this White House petition thing?

For a long time I ignored the White House petitions, mostly, because their sign in system was messing with me and I spend very little time on web sites that mess with me. But they seem to have fixed that problem and now I can actually read what is going on there and participate in the process. Or not.

So, here's some ideas. First, I wonder if we should all sign the petitions for various states to secede from the Union, but only for states we don't live it. That would be funny. Like this one:

ALLOW ALASKA TO SECEDE FROM A DYSFUNCTIONAL UNION.

As an American Veteran on behalf of the U.S. Constitution, the Republic, the Rule of Law, and equal justice for all freedom loving citizens of the United States of America hereby declare that the Federal Government allow Alaska to peacefully secede from a dysfunctional Union that is run by corrupt politicians who buy the votes of individuals who can no longer be seen as American citizens but rather, slaves to a tyrant.

We who took the oath to protect and defend the Constitution of the United States of America against all enemies, foreign and domestic, now declare Washington DC to be the domestic enemy to the freedom and liberty of all Alaskans and indeed, 50% of the free citizens of the USA. Therefore, we declare our secession in support of the US Constitution. LET MY PEOPLE GO!

By the way, it is interesting that a) some of the secession petitions are listed with "Firearms" as the "issue" and EVERY SINGLE ONE (to use some all caps) of the active petitions in the "Firearms" category are for one state or another to withdraw from the Union. Those are the aforementioned ALASKA IN ALL CAPS, Wisconsin, Rhode Island and Utah.

If you are against the secessional petitions, there are some anti-secessional ones, such as a petition to "Disregard attempts to withdraw the state of Texas from the union. United we stand, divided we fall." It reads "Separating the State of Texas will not only destroy its economy, it allow the inhumane thoughts and acts of closed minded individuals to take away the rights and liberties of hard working citizens. This country has evolved and should continue to move forward instead of backwards. We will not be separated.....United we stand behind our president and government. Divided we fall, NO to secession."

I'm undecided on that one. Having texas as a neighbor with an international border between us has a certain attraction. There would have to be strict immigration rules and any time Texas looked at us funny we would have to bomb them into the stone age. Right?

Denying gay couples to wed is a violation of religious freedom; considering the fact that religious and civil marriages are different institutions. The biggest reason why gay couples are being denied to get married is because major religions regard homosexuality as a sin. Contrary to this, the First Amendment of the Constitution states that ‘an individual’s religious views or lack thereof must be protected.’ If gay couples decide to forego church weddings and instead, have a civil union, the government needs to adhere to their request.

There are people who are for and against this kind of thing:

We propose a Wildlife Conservation Stamp, comparable to the well-known Duck Stamp, to support the acquisition of habitat and the conservation of all wildlife in the National Wildlife Refuge system with an emphasis on non-game species. A Wildlife Conservation Stamp would allow birders, photographers, hikers, and other people who enjoy wildlife in a non-consumptive way to financially show their support of the National Wildlife Refuge system.

That one was started by my friend Corey. The idea here is that they have these duck stamps (and some other stamps...we have a trout stamp in Minnesota) which raise money for "wildlife" but more like so you can shoot them with guns than actually preserve them, and piles of money come in from those stamps. Ironically, some bird lovers buy the duck stamps because they are pretty, but the stamps basically support duck hunting.

I'm not against duck hunting per se, but I am annoyed at the way in which our conservation efforts across the country have been co-opted by hunters so that they are the only ones that matter any more. That is not fair and it is not smart. Fuck the duck stamps, I say! I signed it, and you may want to as well.

Anyway, here's the thing. There are a lot of dumb-ass petitions on there, and some good ones, but what I'm not seeing is any kind of effort from the skeptical community and only a minimal effort from the scientific community to generate and promote sensible, fact based and evidence based petitions. Let's turn this: 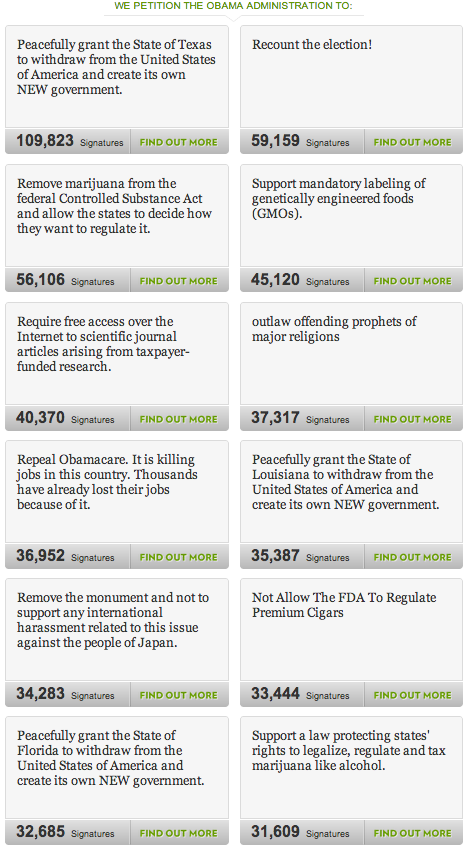 Into a better mix of reason and sense.

Well Greg me and you have not viewed many things eye to eye, and while I don't support the secession, I do support the right they have for peaceful protest. Many of the liberal blogs have slammed this movement while supporting the occupy movement, why is this? Now I understand that many conservatives slammed that movement, but lets step back here a moment, the liberal side of the house proclaims to be the enlightened ones, so then why are they acting like 4 year olds? You don't like me so I am gonna slam you! As to the duck stamp, and I am a duck hunter;) ( I would rather hunt flying NY strip than gamey small cows any day) more of that money from the stamps goes to wet land restoration and protection than to ducks and hunting related things.

Any rate I just want to say thank you Greg from a right leaning independent for your understanding the practices of our constitutionally given freedoms.

Iraqvet99, the duck money does as you say it does, but when it comes to sitting down at the table and working out conservation issues, the hunters have more say than they should and they use the duck stamp money as clout.

So, lets be fair about it. Give us a non-hunting stamp, let people who wan to support conservation buy it, and see if it amounts to anything. If when everybody sits down at the table there is an extra big pile of money for conservation, that is not a bad thing. It's democracy.

I don't see the similarity or parallelism between Occupy and Secession. Some similarities, but really, they come from very different places and have no common goals.

How about a petition to repeal the law of gravity? But wait, there is still some uncertainty in the gravitational constant, so we better not act until that is cleared up.