Greenhouse of the Dinosaurs

You all know Don Prothero. He is an active member of the Skeptics and Science Blogging community. He is the author of several books, one of which you are totally supposed to own and if you don't it's kinda lame: Evolution: What the Fossils Say and Why It Matters. It occurred to me today that I never produced a formal review of one of Don's other books that I really enjoyed: Greenhouse of the Dinosaurs: Evolution, Extinction, and the Future of Our Planet. The reason for my skipping that review is that I had a radio interview with Don during which we discussed the topic as some length. 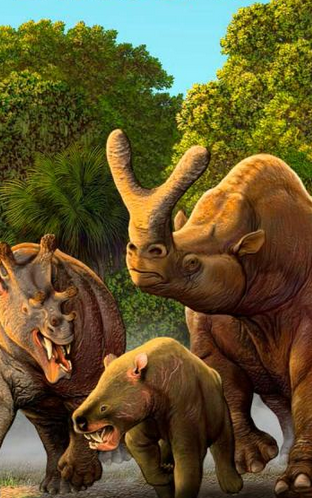 Despite the fact that the word "Dinosaurs" occurs in the title, this book is only partly about dinosaurs. In fact, I would say it is mostly about mammals, insofar as the critters go. And that's good because Donald Prothero is probably the world's leading expert on Fossil Mammals. The dinosaur part is major and interesting, though. One of the mysteries Don addresses is the presence of Dinosaurs in the region of the earth that is dark for 6 months out of the year and generally frozen. Indeed, the "greenhouse effect" was very much stronger (in that there were more greenhouse gasses) in those days than today. All that atmospheric Carbon (in the form of CO2) was eventually to be trapped in the lithosphere, which helped cause the planet to cool to the levels that were around when we, as a species (genus, really) evolved. The world in which everything alive today evolved in is a world with a few hundred parts per million of CO2 in the atmosphere, the world of the "Dino Greenhouse" had much more CO2, and we are quickly heading back to the Dinosaur era level, which is going to really mess us up.

Greenhouse of the Dinosaurs: Evolution, Extinction, and the Future of Our Planet addresses questions of "Yeah, so, it was hot then and everything was fine, so Global Warming is not important." Don also regales the reader with stories about doing palaeontology, about controversies in the field, and that sort of thing. And, he brings us past the K-T boundary, to the "Cainozoic" (age of "Cain) during which the earth cooled, and mammals took over to be the dominant large visible above ground life form. (Yes, yes, I know, bacteria are the dominant life form, yadda yadda... just don't look for any murals of bacteria interacting on the wall of the Yale Peabody Musuem any time soon.)

Greenhouse of the Dinosaurs: Evolution, Extinction, and the Future of Our Planetis a great book. Highly recommended by me.