Flying over the Himalayas 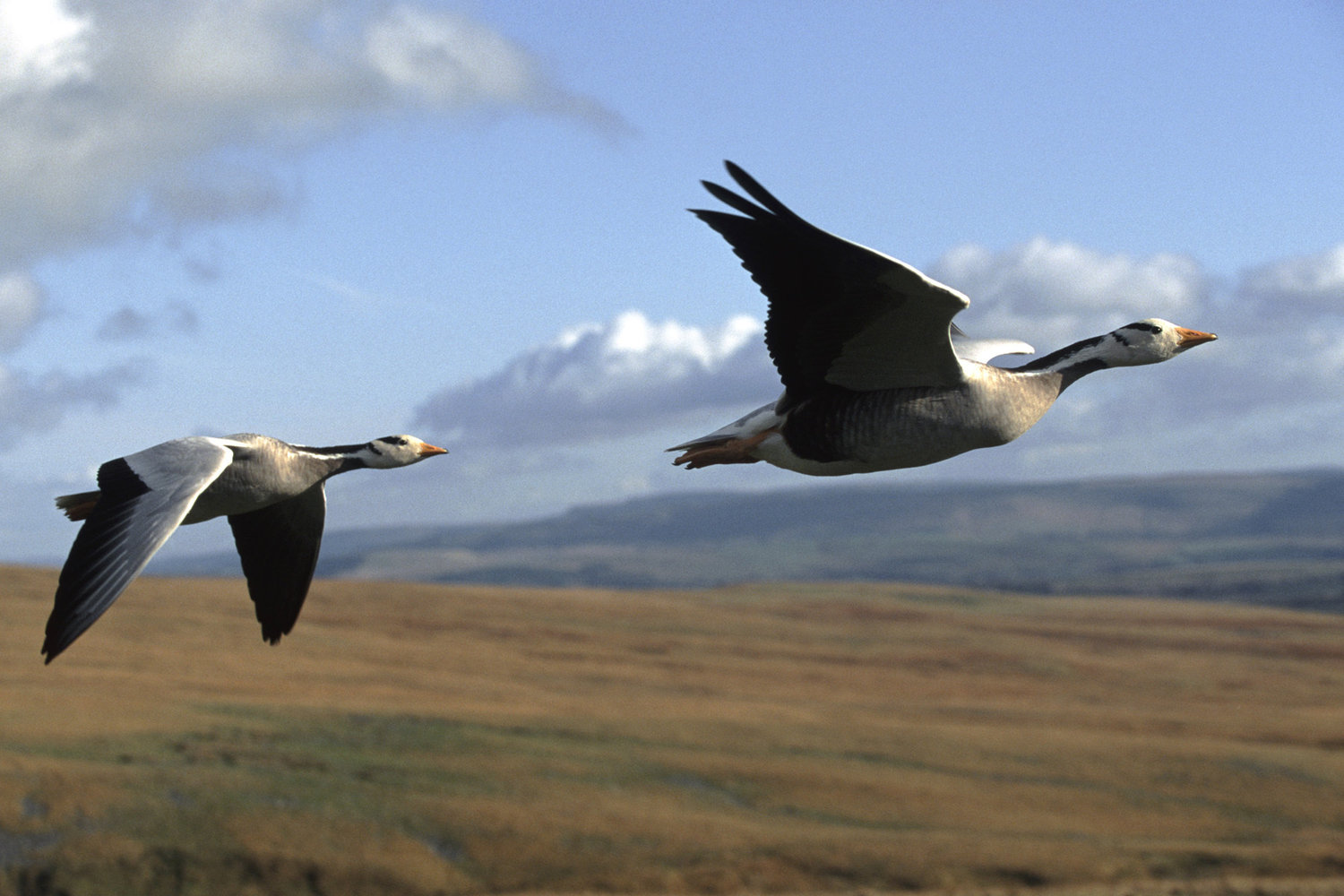 I listened to a really interesting story on NPR this morning about new discoveries regarding the flight patterns of bar-headed geese. These birds are known for their incredible ability to fly over the Himalayas on their annual migration to central Asia. Until now, it was often assumed that the birds reached a specific altitude and then simply maintained it for the duration of their migratory route. A new study published on Thursday in Science questioned this assumption.

Dr. Doug Altshuler (Zoologist, University of British Columbia, Vancouver), who was not involved in the study, was quoted on NPR saying, "It was thought for a long time that they might actually be flying over the peak of Everest itself. Some of the records of early climbers on Everest claimed that when they were climbing on Everest they actually saw the bar-headed geese flying overhead."

Lead study author Dr. Charles Bishop (Biologist, Bangor University, United Kingdom) wanted to understand whether the birds really do remain at one elevation throughout their flight in addition to what impact this annual migration has on the physiology of the birds. So he and his team traveled to Mongolia where they captured molting geese (a period when the birds are unable to fly). Each bird was implanted with a small tube containing monitors that measured altitude, wing-beat frequency, as well as heart rate. The following year they returned to the lake and successfully recaptured some of the same birds from which they extracted the tubes.

The data showed that the birds do not in fact remain at the same elevation during migration. Instead, Dr. Bishop said, "They climb, get over an obstacle, and then go back down again. They just seem to be tracking the terrain, give or take a few hundred meters." Their findings further showed that as the altitude increases, so do the costs of flying resulting in increased heart rate and the birds have to flap their wings harder to create enough lift to keep them in the thin air. Therefore, flying close to the ground simply allows the birds birds to conserve energy and take advantage of occasional updrafts

Today's symposia included a session on "Integrative Cardiovascular and Respiratory Physiology of Non-model Organisms" as well as the August Krogh Distinguished Lecture. This year's Krogh lecture was given by Dr. Stan Lindstedt from Northern Arizona University. Dr. Lindstedt is arguably best known…

Here are highlights of my favorite animals that migrate by air: Bugs: Monarch Butterflies: How in the world does this little insect travel so far?? These butterflies migrate very long distances to wintering grounds on the west coast of the United States or in Mexico. You must watch this video clip…

Highlights from today's sessions included: Norelia Ordonez-Castillo, undergraduate student from Fort Hays State University, presented her research on channel catfish. According to Norelia, these fish can become obese so her research was geared towards trying to find out how their receptor for LDL…

So the study change the view of flying like this birds.

I did not know that geese flew over the Himalayas. My first thoughts were that it would be difficult to breathe at those altitudes and the temperatures would be freezing. The conclusion of the research that was done on the geese's heart-rate, wing-beat frequency and altitude, however, seem to be quite logical in that one would believe it to be logical in that it would require effort to fly under those circumstances.