In an old colonial-looking restaurant that served ten kinds of steaks, I met up with an experienced explorer and a local farmer, to have dinner and discuss plans for an upcoming research project that would be managed by The Explorer and that would partly be on The Farmer's land, which adjoined a rather extensive and remote wilderness area. I don't remember a lot about the conversation, but one memory of the evening stands out: That was when The Farmer, rooting around in a bag for some cash to tip the waitress, pulled out this big-ass gun ... a small cannon, really ... that was in the way. For just a moment, the gun came out of the bag and went on the table, then back in the sack. I wondered if this was a random event or if it was a not too subtle way to let everyone around see that This Particular Farmer was packing Major Heat. I'd seen that move before in this part of South Africa, which is where, by the way, this dinner was being enjoyed.

Earlier that day, The Explorer, whom I had commissioned to be my field logistics manager, drove me out to a possible research site -- an island centered in one of Southern Africa's more significant rivers. The island had once been part of a farming project, now defunct, and at some point a levy was built there to divert water into an irrigation system. The now defunct and overgrown levy was about four kilometers long, flat topped, and exactly the width of a vehicle's wheel-base plus 30 centimeters. There were numerous erosional cuts on both sides of it, so as The Explorer drove our truck along the top of the vegetation-covered berm, the wheels would take turns dropping into these open-ended Potholes-Of-Death. I wondered what would happen if we hit an erosional gully that was a bit bigger than the others, or two at once, and just as I was wondering about that, The Explorer uttered some words that made all that seem less important.

"Oh shit ... I was expecting a ramp at this end of the levy so we could drive straight off. Gonna have to back up to the beginning!"

And with that our Toyota Prado reversed direction and we started to back up the four kilometers we had driven, moments earlier, in the other direction.

"Shouldn't I get out and help you back up?"

"Why? Backing up is the same as going forward, Greg. It's just in the other way 'round."

And so we backed up, lurching in and out of the erosional holes, just a little slower than we had driven in, without incident. That was some bad-ass impressive driving.

A half hour later we were off the levy, off the island, out of the river valley and heading for the restaurant where we would meet our Heavily Armed Farmer. But we needed fuel for the truck, so we pulled into a station. As we got out of the truck to visit the shop while it was being fueled up, I noticed two men standing nearby looking at us, and our truck, their eyes scanning back and forth between The Explorer and the side of our vehicle. I quickly realized what they were looking at: The very new Toyota Prado ("4Runner" to you Americans) had a huge, deep and wide scrape running from the front left fender, across both doors, and reaching the back left fender. In other words, repair of this scrape would require replacement of four different panels. In the US this would be at least a $3,000 repair job. 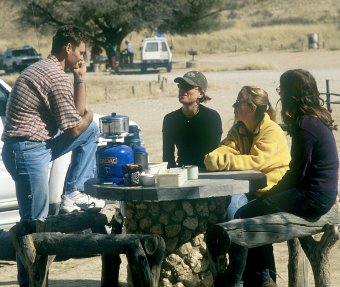 South African Man Stance. The ladies seem to love it.

The scrape had been put here by the owner of the truck, from whom we had rented it, just two days before. He was a former Special Forces Commando who had spent several years with the South African Military in Namibia and Angola, then retired to go run an equipment repair business. He was, in fact, the first White South African I was to observe pulling this "Oh, look, I happen to be carrying a gun" trick like The Farmer was to do that evening at dinner. In his case, it was in the parking lot of a busy strip mall where we were loading up on groceries. He had taken up the South African Man Stance, which is where you keep one foot on the ground and put the other foot up on something high so that your knee is rather bent and all the muscles in both legs (you are wearing very short South African Man Shorts) can be seen bulging and rippling and being all hairy and stuff. Or at least that is what I think the purpose of the South African Man Stance is. Anyway, on that occasion, our Special Forces Commando and Toyota Truck Owner had his Very Large Piece (a .357 magnum revolver) in a rather skimpy looking holster strapped to his leather belt, so when he took The Stance it shined and shimmered in the afternoon Sun, the glints and flashes attracting the gaze of everyone hanging around or passing through. Big White Man With Gun. Check.

Anyway, Special Forces had purchased the truck as an investment. He owned several vehicles and rented them out to various people for specialized uses, and The Explorer, an old friend of his, was able to get a nice deal on a truck that was virtually off the lot. It had fewer than 200 klicks on it when we picked it up. Not even 200 kilometers on the odometer and this huge crease shamefully scratched into the side. Special Forces Guy had picked up the truck at the sales lot, drove it home, and proceeded to get it stuck between a rock and a hard place, where the hard place was an iron post in his yard. He couldn't figure out how to turn the truck without scraping it to get it out of this jam, so he just drove it against the post and let the chips fall where they may. Rather embarrassing for a man of his experience and with his manly legs and giant piece and everything.

So the two men standing by their truck looked at the scrape, looked at The Explorer getting out of he driver's seat, looked at me, and one of them said to me, "That's what happens when you let a woman drive your nice new truck, eh?"

Green Kalahari, South Africa: Toyota Prado driving through the only puddle in a thousand kilometers in any direction.

I looked at Lynne, The Explorer, and noticed that she was taking no notice, so I said nothing and followed her into the shop where she was intent on picking up a few kilos of dried antelope flesh to have handy during our research expedition (a few service stations in South Africa are linked to "Biltong" shops). Meanwhile, I thought about how many times I'd heard the same thing during the course of this trip. Every time we'd pull into a station or a shop or anywhere else, if there was a man standing around he would take note of the fact that a woman was driving the truck (Lynne, The Explorer, always drove for me) and the man would make a remark to me about how I shouldn't have let the lady drive. Meanwhile, I had learned long ago that Lynne was probably the best driver in the country, certainly the best driver I had ever met anywhere. But those men at fuel stations and strip malls were unable to stop themselves, even when I would explain the situation, from engaging in a perennial South African trope ... that women were incapable of driving a vehicle without running into something.

So we bought the dried antelope flesh, paid for the gas, tipped the service station attendee and headed off to meet our Heavily Armed Farmer. "We'd better get going, dinner is at 7:00" I said to Lynne as she pulled the truck out onto the road.

"Don't worry," she said. "If we're late, it won't matter. She's always a half hour behind," Lynne said of her old friend, the Heavily Armed Farmer named Mary.