As you know, NASA is planning a press conference later today, but you don’t have to wait for the big news. It was leaked, and I’ve got it.

The NASA Curiosity Mars Rover has discovered something interesting and rather enigmatic. I understand NASA will be asking your help in trying to identify what it is.

At first, the object appeared as three enigmatic shapes, kind of gray in color, very near each other, spotted in a ground-oriented medium resolution image. This is what the Rover image looked like: 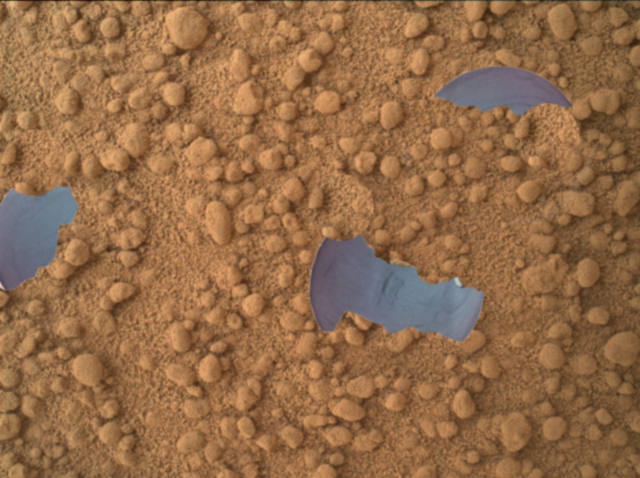 Spectral analysis of the objects indicated that they are similar to igneous rock, but with a very high silica content. On the spot ESR and thermal reconstruction protocols indicated that the object had previously been heated to a relatively high temperature, much less than the hottest volcanic levels but still hot enough to melt most minerals. Also, the temperature had been held very constant for a period of time (several hours) but unlike most naturally heated minerals, that is a very short period of time; most volcanic materials are, at some stage in their development, heated for very long periods, like centuries. This was heated only for a matter of hours. That was strange. Also, the internal structure as far as could be ascertained consisted of two layers, an inner one and an outer one, the outer one being essentially glass-like and very thin, the inner one being more stone-like.

NASA has an on board Artificial Intelligence algorithm that automatically checks any of the science observations made by the instruments to see if they are “non-natural” in some sense, indicating what scientists call “Potential Artifactual Techno-Specific Intigrated Enigma” (PATSIE) status. In earlier tests, the Curiosity Mars Rover applied these algorithms to physical analysis of its own parts (it’s wheels, various metal bits, etc.) and in each case PATSIE indicated very high values. In applying the PATSIE algorithm to bits of dirt and rock, only low values were obtained. This was as expected, and was essentially a way of testing the PATSIE system.

According to chief project scientist Professor Donald Kessler, “A high PATSIE value is expected to be associated with ‘intelligence’ or ‘design’ as one might find in a human made artifact. When we first had high PATSIE values on an actual Martian object, we became very excited. It appeared as though we might have come across an object manufactured by a highly intelligent life form. If so, I am certain that the life form that made any such technologically sophisticated object would be a friendly one. There is nothing to worry about.”

After completing the full battery of physical tests on the object, the Mars Curiosity Rover’s “Flange Integrated Nanotechincal Gyrating Extended Rotator” device (FINGER) was used to turn each of the objects over and manipulate them in order to allow NASA scientists to visualize their obverse aspects. It was quickly realized that the three separate objects fit together. When each piece was, essentially, turned over and moved into relative position to each other, this is what was found: 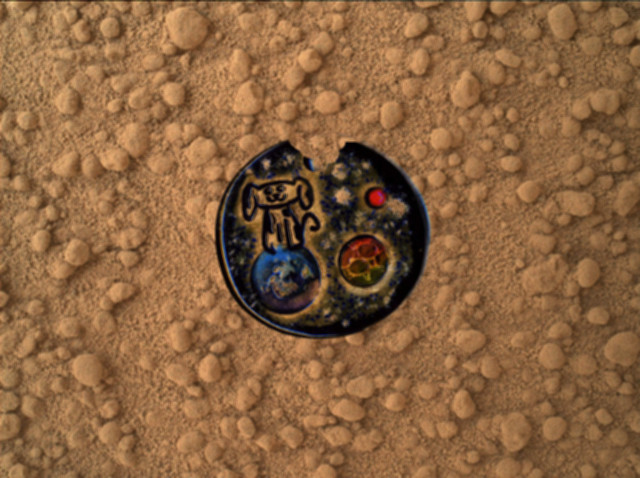 Apparently, there are two, not just one, but two Rovers on Mars!

You know it's true, it's on the internet!

Count down until this appears in a Chinese newspaper as actual news (or on Hoagland's web site).

cool this outta be everywhere by 2 night:)

I was going to say potsherds until I scrolled down but this is even better :)

It's a photoshop edited one...