The Slow Loris (Genus Nycticebus) is a category of prosimian (primates that are neither monkey or ape) that lives in southeast Asia. Most prosimian species live on the island of Madagascar, but there are several African and Asian forms, all of which are nocturnal. The Slow Loris is special because it is the only primate we know of that has a toxic bite.

The total number of nocturnal primates known has increased considerably over the years and I'd wager there are many more to be found. “Technological advances have improved our knowledge about the diversity of several nocturnal mammals,” said Rachel Munds from the University of Missouri Columbia. “Historically many species went unrecognized as they were falsely lumped together as one species. While the number of recognized primate species has doubled in the past 25 years some nocturnal species remain hidden to science.”

Tomorrow, a paper will be released providing the diagnosis of a new species of slow loris. From the abstract:

The slow lorises ... once included only two species, but recent taxonomic studies resulted in the description of three additional species; ... The Bornean loris in particular is characterized by pelage and body size variation. In this study, we explored facemask variation in the Bornean loris (N. menagensis). Differing facemask patterns, particularly influenced by the amount of white on the face, significantly clustered together by geographic regions, separated by notable geographic boundaries. Our results support the recognition of four species of Bornean lorises: N. menagensis, N. bancanus, N. borneanus, and N. kayan. Genetic studies are required to support these findings and to refine further our understanding of the marked variability within the Bornean loris populations

Previously, one species of Bornean slow loris, with three subspecies, was recognized. The present study elevates the three subspecies to species status and add the fourth as a new discovery. Obviously, this significantly increases our conception of diversity in the nocturnal Bornean rainforest. One of the biggest threats to these animals is the pet trade. “The pet trade is a serious threat for slow lorises in Indonesia, and recognition of these new species raises issues regarding where to release confiscated Bornean slow lorises, as recognition by non-experts can be difficult,” said co-author Professor Nekaris, from Oxford Brookes University.

The study used 25 photographs and 27 museum specimens including the type specimens for two of the previously designated subspecies. A large number of features were examined and measured, of which eight showed variation across the sample, thus showing promise to use as in classification. Here is an example of one of the traits, called "Crown": 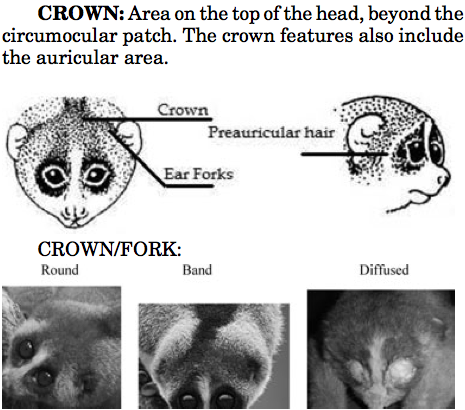 Various fancy statistical analysis were done to produce two "functions" (combinations of variables) that separate the samples as indicated in this graph: 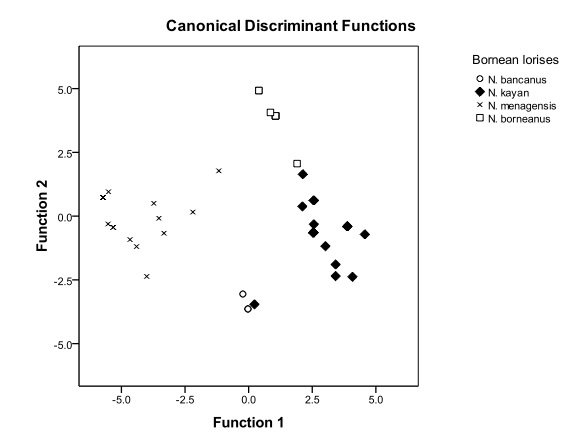 These traits clearly sort out the groups, and these groups have geographical distinctions as well.

Group 1 is on the island of Bangka and in the southwestern portion of Borneo south of the Kapuas River and east to the Barito River; this group’s boundaries appear not to extend all the way east to Barito River. Group 2 is found in central Borneo, north of the Kapuas and Mahakam Rivers. It is often found in higher ele- vations, but is not restricted to them. The boundary of Group 3 overlaps in part with Group 1, as it is found north of the Kapuas River, but its range ex- tends as far east as the Barito River. Finally, Group 4 inhabits the southern Philippines and northern and eastern Borneo, primarily in coastal and low- land areas. It does not range south of the Mahakam River.

So there are now four species: N menagensis, N. bancanus, N. borneanus and N. kayan. That last one is the new designation, and is named for a river flowing through the region in which it lives..

This is most timely, Greg. My significant other's headed to Borneo next month. Maybe she'll get to see some of these guys, and, hopefully, even bring back a photo or two to regale me. Cool!