Looking just at the contiguous 48 states of the US, NOAA has determined that 2012 was the warmest year on record. It was also ranked second in "extreme" weather events including fires, major storms, and drought. Tornado activity was less than average.

The report came out yesterday and states:

In 2012, the contiguous United States (CONUS) average annual temperature of 55.3°F was 3.3°F above the 20th century average, and was the warmest year in the 1895-2012 period of record for the nation. The 2012 annual temperature was 1.0°F warmer than the previous record warm year of 1998. Since 1895, the CONUS has observed a long-term temperature increase of about 0.13°F per decade. Precipitation averaged across the CONUS in 2012 was 26.57 inches, which is 2.57 inches below the 20th century average. Precipitation totals in 2012 ranked as the 15th driest year on record. Over the 118-year period of record, precipitation across the CONUS has increased at a rate of about 0.16 inch per decade. 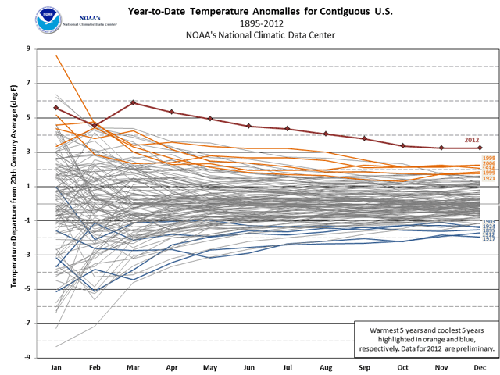 Figure 2. Temperatures for the contiguous U.S. in 2012, compared to the previous record warmest and coldest years in U.S. history. The annual U.S. average temperature was 3.3°F above the 20th century average, and was an astonishing 1.0°F above the previous record, set in 1998. It is extremely rare for an area the size of the U.S. to break an annual average temperature record by such a large margin. Image credit: NOAA/NCDC, caption from Jeff Masters.

You can see the entire report here, and a summary here. A report on Fox News coverage of the report is here. Jeff Masters as Wunderblog discusses it here.

I just take this as another reason to plan my career in the WA direction.

And here in Providence, RI we'll be scraping 60F in December come this weekend. Tell me there's no climate change, tell me!

And here in Michigan we're told the levels of two Great Lakes (Michigan and Huron) are at record low levels as of December 2012.
Our weather has been adjusting too, with these recent events:
Last year ice coverage (area covered) was lowest ever recorded: it will be interesting to see how close this year's coverages are.
And, according to WMU, since October 11 we have had roughly 6 inches of snow, with slightly more than 33 the average seasonal norm. The forecast is for temps in the 50s with rain the next couple days. Definitely not typical January weather.