This is not new, but I just found out about it from Paul Douglas's blog. Back in 2011, an F3 tornado touched down and went straight for over 60 km. The beast (that's the technical for a big-scary-tornaod) was almost a kilometer wide. It left an impressive scar, which you can see in this photograph:

More recently, when so called "Nemo the Storm" swept across the same region, the scar became plainly visible, as shown in this image: 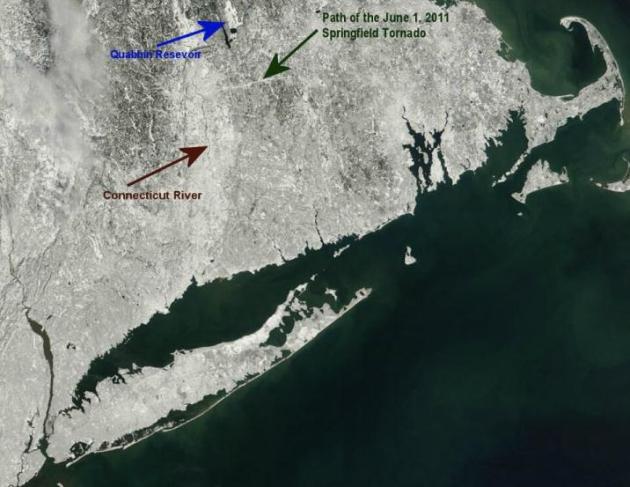 Most interesting. This suggests the potential of developing software that will spot these types of tracks immediately after tornados, and map the actual paths taken, more quickly and accurately than would be done with ground reports. That may be useful for various purposes as the frequency and severity of tornados increases as a factor of climate change.

The bottom image is from after Winter Storm Nemo (as Douglas points out in his blog), not Superstorm Sandy. The reason the track shows up is that the tornado uprooted trees along that path, so the snow shows up more clearly there than in the surrounding secondary growth forest. For similar reasons the snow looks brighter in the urbanized zones of the Connecticut Valley and metro Providence, as well as the ice-covered Quabbin Reservoir, than in more rural areas.

Most of Tornado Alley is grassland or agricultural land rather than forest, so this technique wouldn't work there.

Eric, thanks for the correction . Of course it was Nemo, just some sort of inaccurate brain connection going on here.

That was the first time I'd ever heard use of the emergency broadcast system that wasn't a test.