The New Crossley Raptor ID Book: You Want It

A couple of years back, the The Crossley ID Guide for Eastern Birds

came out and it caused a huge splash in the birdwatching world. For some time now it has become apparent that bird watching, especially the identification part of it, was changing in its approach. We describe it this way, though I think the reality is more complex: In the old days we used logical links to known reliable field marks to turn carefully made field observations into species identifications of varying degrees of certainty. Now, a new approach has been developed where we look at the whole bird and get an identification using an overall gestalt, and then to the extent possible verify the identification with tried and true field marks.

This consideration of methodology would be a great way to get into how humans make observations and draw conclusions … how we think and how we know things, in fact … and would not be done well enough without bringing in semiotics and other areas of philosophy. Some day we’ll do that. In the meantime, just consider the difference between a typical field guide and a guide like Crossley.

Well, now, we have a new book to play with: The Crossley ID Guide: Raptors

. This new volume follows the same principle as the original Eastern Birds book, but with some important differences. A very large portion of Raptors

is not images, but rather, very information rich species accounts along with pretty darn good range maps. The first half or so of the book consists of the usual Crossley style plates. Here, we have gone back to an old style layout: Text and details in one section of the book and plates in the other. Another important difference is that there are more images per species, for the most part, in Raptors

, and in some cases, variants are given their own sets of plates.

Crossley Style: Lots of photos of one species as they appear in real life, in an appropriate context.

Also, there are plates showing many individuals of more than one similar looking species, with the key indicating which image is which species located elsewhere in the book so you can’t cheat by just looking at the caption, and get to learn the differences without leaving the comfort of your birding gazebo, or wherever it is you hang out.

Overall, there is far more information about each species than in the Eastern guide, which is of course exactly what we would expect from a more specialized volume such as this. There is also a handy comparison-of-everything graphic in the front cover with page numbers, a nice map in the back, and the other usual amenities found in most bird books these days.

I used some of these images to construct the quiz I put HERE (the winners of that quiz to be announced soon).

I can not do the images justice with inserts into a small format thing like this blog post, but here are a few examples to give you an idea: 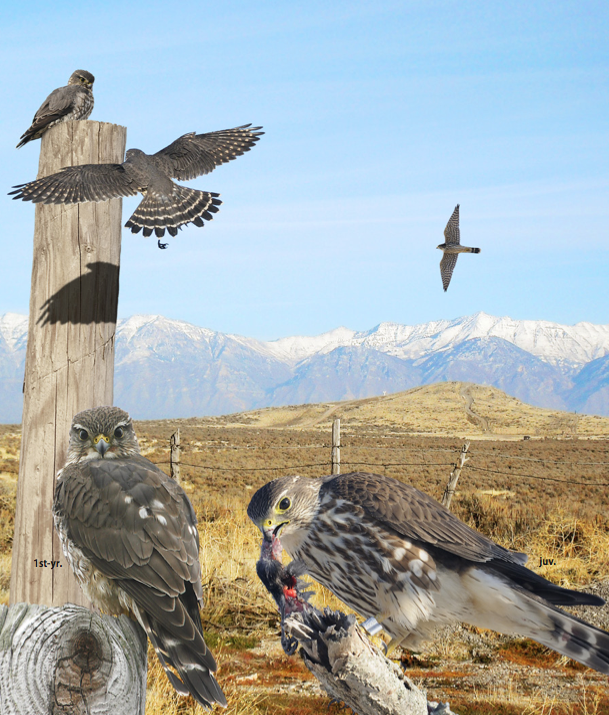 This is not a book review, in that I’m giving you the negatives and positives of a particular book so you can decide if you want it or not. This is, rather, a notice that the book you want is available now

While we are on the subject of raptors, you will probably want to check out this video of a red tailed hawk trying to get at the eggs or chicks of a bald eagle, but instead, becoming the eagle’s lunch. Caution: It is gruesome.

Your next bird book: The Crossley ID Guide (Eastern Birds)

Three days ago I happen to glance out the front window of our townhouse and found myself staring at a bald eagle swooping by, presumably after picking up one of the neighborhood dogs or small children1 A few minutes later, the doorbell rang. When I opened the door, no one was there but a package…

You’ve heard of the The Crossley ID Guide: Eastern Birds (The Crossley ID Guides). It is a revolutionary new way to assemble a field guide, where each page has a drawing of what it would look like if suddenly outside your living room there was a full blown habitat for some species of bird, with…

Bring your birding to the next level

Description and identification of birds, or anything else, can be done in a rote manner with straightforward reference to details. If information about enough details is available, the identification will be accurate. But as humans we hardly ever do that sort of thing. If you ask someone to…

Here in the Northern Hemisphere, many of our birds fly away in the fall. Other, very cool birds from even farther north, depending on where you live then arrive. But just about now, where I live, we are at the tail end of the migration out and not quite at the migration in, so this is a good time…

I like that it is a different approach. The Roger Tory Peterson field mark method has worked for me for years, but it does have some limitations in individual birds whose plumages don't fit within the confines of the several pictures on each plate.

However, an approach that emphasizes the gestalt of a species, especially in motion, would be very useful for field observations where birds rarely pose in perfect profile with little arrows pointing at field marks.

I'm looking forward to grabbing up the Raptors edition. Is there a Western Birds edition out yet?

Note: Gestalt...a good alternative to the word birders use. I still can't use the other word without snickering.

There is not a Western bird edition at this time. I'm not sure what plans are in the works, maybe I can find out about that.