The Problem With The Global Food Supply: New Research

Emily S Cassidy, Paul C West, James S Gerber and Jonathan A Foley, from the University of Minnesota Institute on the Environment, have produced a very important study for IOP Science Environmental Research Letters. (This is OpenAccess so you can access it openly!) You know Emily as one of the participants in our CONvergence panel on food last July. The research Emily and her colleagues do is some of the most important work being done right now, because it is about the food supply.

The bottom line is this: When we look at our food supply, we find that a large amount of what is grown in agricultural fields does not make it into the stomachs of people. There is a lot of waste, there are problems with delivery and distribution, and so on. But what this study looks at is the percentage of potential calories that go to non-food final products, or do get into our diets but do so in a way that significantly reduces the efficiency of the system. There has been a huge increase (percentage wise) in how much field crop is used for biofuels instead of food, but the total amount now is still only 4%. Also, one could argue that this is good use of field crops if the production of biofuels reduces carbon emissions (which is only partly the case). More importantly, a huge amount of the corn and other crops (but mainly corn) that is grown is used as animal feed, and only about 12% of that, in terms of calories, ends up in the human diet. The reduction is because as we move up trophic levels, energy is taken out of the flow.

This graphic from Cassidy et al shows the distribution of calories across food and non-food destinations: 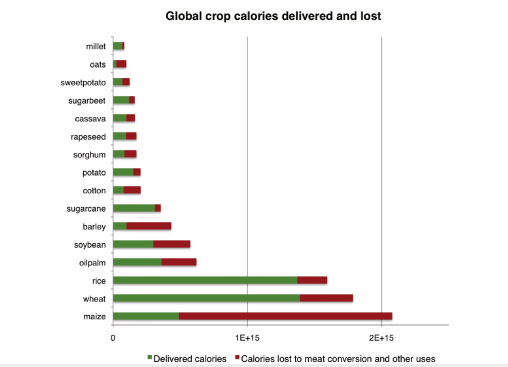 Figure 2. Calorie delivery and losses from major crops. Calories delivered are shown in green (this includes plant and animal calories) and calories that are lost to meat and dairy conversion as well as biofuels and other uses are shown in red.

The graphic at the top of the post is also from the paper, and has this caption: "Figure 1. Calorie delivery fraction per hectare. The proportions of produced calories that are delivered as food are shown." The thing to note here is the unevenness across the globe in efficiency of calorie production-to-plate. There seems to be a latitude effect, and I wonder if that has anything to do with the environment and seasonality. But the largest contributor to this variation in efficiency is probably simply the amount of meat in regional diets. As Emily points out in the video that accompanies the paper, even small changes in dietary practices can result in large changes in ultimate agricultural productivity.

As an aside, Emily is a friend and colleague and I've been really impressed with her work and have been very excited to see these important results coming out. Go Emily! (And co-authors, of course.)