I love it when controversy develops in climate science. It demonstrates that climate science is a science, not dogma. Also, it is interesting. And, ultimately, it is important because we need to reduce uncertainty and addressing controversy eventually does so.

There is a new controversy in climate science about a vitally important issue. Last year, Hurricane Sandy (aka Superstorm Sandy aka Frankenstorm Sandy) devastated coastal New Jersey and flooded the Battery in Manhattan. This was a highly unlikely event. Estimates of how likely it is for a major hurricane to follow the path Sandy followed – a nearly perfect east to west trajectory from the ocean onto the land – range from once in 400 years to once in 800 years. But there was an explanation. A set of unusual large scale moving masses of air related to the jet stream had formed in such a way to shape Sandy’s storm track into a configuration never before seen for any hurricane for which we have accurate storm tracks. This configuration of air masses is best explained as the outcome of two unusual large scale weather phenomena, changes to the jet stream owing to Arctic Amplification and a negative North Atlantic oscillation. These configurations, in turn, are thought to have been made more likely by the effects of anthropogenic global warming. 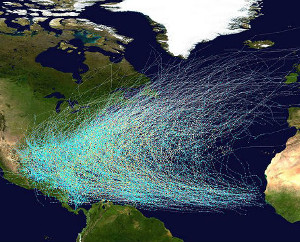 NOAA's collection of over a century and a half of Atlantic Hurricane tracks. Note that big storms go from east to west while in the tropics, then if they make it far enough north, go west to east. Storms that affect the Atlantic Coast of the US tend to move north along the coast, grazing the continent and thus weakening. A storm that goes up the Atlantic staying over warm waters such as the Gulf Stream, then moves east to west against the coast in non-weakened form, is a monster.

For this reason it has been suggested that increased global warming due to the release of carbon into the atmosphere by widespread and intensive burning of fossil fuels will increase the likelihood of Sandy-like events in the future. A handful of research projects have supported this idea. But, now there is a new paper that suggests the opposite. Elizabeth Barnes, Lorenzo Polvani and Adam Sobel have a paper in PNAS (“Model projections of atmospheric steering of Sandy-like superstorms”) that concludes that future storm tracks in the North Atlantic, under global warming, will be more likely to push hurricanes (or their downgraded senescent forms) to the east rather than to the west ala Sandy. The authors identified the specific atmospheric features that steered Sandy into New Jersey. They then ran a number of very sophisticated climate models into the future to see if these phenomena would be more or less likely, and found that they would be less likely.

This finding, if correct, would be good news for New York and New Jersey and other states along the east coast of the United States north of Florida. (The Sandy-like track could actually happen along a wide stretch of the coast north of the sub-tropics.) This finding (and other research) would be bad news for Western Europe because this new finding also predicts a higher chance of hurricanes, or more likely their downgraded but still significant versions, making landfall there.

Jeff Masters, on his blog at Wunderground, has summarized some of the counter arguments to this finding. He notes that models of future climate change are limited when it comes to the sort of phenomena being addressed in this study. He notes that the current climate models predicted Arctic Sea ice reduction, but were far off the mark in the rapidity of that catastrophe. He cites a personal communication with climatologist Jennifer Francis who notes that the zone in which west to east movement of storms would likely be enhanced is far to the north of where Sandy struck land, while the strongest decreases in west to east steering may be where the steering systems that affected Sandy were, suggesting that the same models could predict an increase in Sandy-like tracks.

Superstorm Hurricane Sandy's track was unique. First it went, as usual, from east to west in the tropics. Then it went north, then instead of heading north-northeast into the North Atlantic's hurricane graveyard, it turned abruptly to the west and hit the US Coast as a very strong storm. At the last moment, before "landfall" Sandy was downgraded from its hurricane status, but not because it grew weaker. Rather, it ate a nearby storm and gained strength, and in so doing lost its hurricane-typical organization, much like Bill Bixby lost his humanoid form by turning into the Incredible Hulk.

There is another way to look at this controversy. Sandy’s track was nearly impossible. It was not quite as unlikely as all of the oxygen molecules moving, by random chance, to one corner of a room full of people causing everyone to suffocate, but it was unlikely. Imagine that I showed you a device that I claimed would cause all of the oxygen molecules to move to one corner of a room. You would not believe me because that is pretty much impossible. But if I deployed the device and it worked, you would think that my device worked. There is an alternative possibility; it is possible that my device is bogus but I deployed it at the exact moment that the oxygen molecules happen to move to one corner of the room on their own. But you would never conclude that as an explanation because it just can’t be true. Now, if my device had a less unlikely claim, such as that pressing a button on it would cause a certain stock on the New York Stock Exchange to go up instead of down, then your suspicions that my device only seemed to work by chance would be reasonable. If stocks from day to day are more or less random in their price change, my device would appear to work nearly half the time. If I showed this device independently to a dozen people, I could have a couple of them thinking that my stock price mover machine worked, but most likely they would hold on to their money until they saw more proof. But if I had a device that did something we all know has a one in a zillion chance of happening, and I press the button and the thing happens, it would be very hard for anyone to dismiss it.

Sandy’s track was highly unlikely. But it happened. It happened because of the configuration of air masses extant at the time. The air masses were configured as they were, most likely, because of changes in atmospheric circulation owing to the warming Arctic. This happened during the one year in which the Arctic Sea ice melted more than we have ever seen it melt. If I told you that the next time the Arctic Sea ice melted as much, and as quickly, as it did in 2012 that any hurricanes that headed up the Atlantic would have an enhanced chance of following an east to west track before landfall in on the Eastern Seaboard, you’d find that a lot easier to believe than my claim about a device that moves all the Oxygen molecules to one corner of the room.

Perhaps the future of hurricanes in the North Atlantic is a bit like divorces and tornadoes in Arkansas. When we consider the East Coast of the US and the West Coast of Western Europe, we’re not sure what is going to happen, but either way, somebody’s going to lose themselves a coastline.