Over the last several days the Atlantic has been very active, producing numerous storm systems that had promise to turn into something. Only one did, Gabrielle, and Gabrielle downgraded to a stormy blob (#1 on the above graphic from the National Weather Service). Gabrielle may well be back as a tropical storm, but there is only a small chance of that. If exGabrielle does turn into something it will most likely go straight north in the Atlantic. The second item is something that the NWS hurricane people have been watching since it was over the Sahara, hinting in their regular updates that something is coming. It isn't that common that a tropical wave gets that much air time while still over West Africa, so I'm thinking this one is for real. The update from the NWS indicates that there is about an 80% chance of this wave (#2 on the graphic) will become a tropical cyclone during the next five days. This storm, as well, would likely track north across the Atlantic.

So, both storms have zero chance of affecting the Gulf of Mexico, and both have a high chance, if they develop into hurricanes, of tracking more or less harmlessly up the Atlantic.

Of course, Sandy tracked up the Atlantic and then made a left turn into New Jersey/New York. I don't think the steering conditions for that happening with either of these storms is in place at the moment, though.

Update: That system off the West African coast now has a 90% chance of becoming a named storm. I believe the next name in line is Humberto: 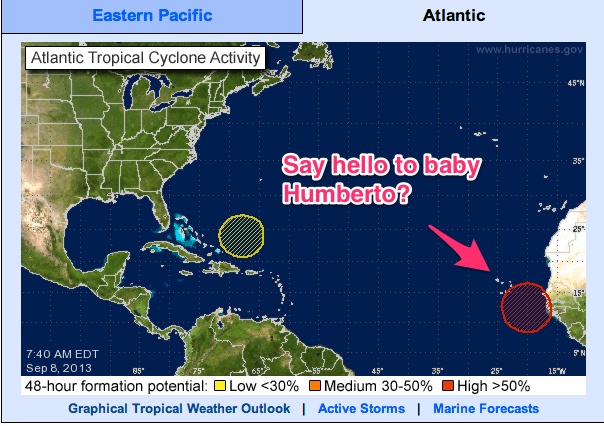 So, how has the Atlantic hurricane season shaping up so far? According to data accumulated by the National Weather Service, as shown (with added items) here ... ... we should have had about four or five named storms at this point in the season. Since numbers for this time of year are small,…

Hurricanes in the Eastern Pacific: 2015 UPDATE

See below for update. You may not have even noticed it, but hurricane season has officially started in the Eastern Pacific. That is because the official date of the start of season is May 15th, though the actual hurricanes rarely get the memo and start whenever they want, but usually after that…

Original Post: The Atlantic storms are getting interesting. Two different systems are poised to become named storms, but it is not clear which one will be awarded the name Hermine, and which one Ian. If the storm recently near Cuba develops as expected, it could become a weak hurricane before…

UPDATE (Aug 30th) Irma is a new named storm in the Eastern Atlantic. See this post for details, eventually. UPDATE (Aug 29th) There is a system currently raining on Cabo Verde, off the West Coast of Africa (nee Cape Verde) that is expected to develop. It is on the verge of becoming a tropical…
Advertisment