How to find a Leprechaun

Nature editor and author Henry Gee has produced his Christmas list in which he describes his three wishes as an editor at a scientific journal; he enumerates the scientific discoveries that sit at the top of his professional "bucket list." 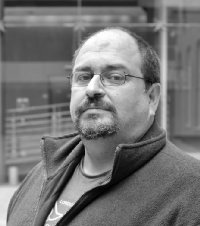 Henry Gee. Not a Leprechaun.

Henry: As you know, I address in a fictional context in "Search for Sungudogo" (now only 99 cents on Amazon) all three of your wishes, the discovery of life elsewhere in the universe, the discovery of intelligent life somewhere, and the documentation of non-human hominids in recent times (including the present) like, but later than, the "Hobbit" at Flores. (Drop me a line for a review copy.) In the revised version of the novella I also explain the origin of Penn and Teller. But I digress.

The chance of the existence of Homo notspaiens at present must be zero, unfortunately. But I do like the idea of proto-historical or historical cases. "Like" as in how a TV detective "likes" a particular suspect for a particular crime. Maybe it is just a hunch. A re-examination of all those cases in the sepia literature of little people or not-quite-humans thought to be imagination, serious confusion, or out and out racism may be necessary.

I'd like to put a finer point on the prediction though. The hominid needs to have existed after some key point in time (which may be hard to identify on the ground but that could be fairly easily defined as an archaeological or historical transition). For example, post first writing or post settled horticulture. Flores already fits the obvious next oldest criterion of post Last Glacial Maximum (LGM). Also, and this is not a requirement but it would be way cool, I would like them to have existed at the same time as and in the same region as the Wrangle Island Mammoths because then tiny people-like creatures could have hunted, or ridden, or otherwise lived among, tiny furry elephants.

Also, I'll offer a prediction of where the hominid would have lived. It is most likely to be in an area where the landscape has two distinct habitats that are long term and well defined. One is a habitat likely to be inhabited long term by regular humans and the other where regular humans are likely to forage or visit only now and then, but where this second, marginal, habitat is livable. Also, it is more likely at the outer edge of post-LGM expansion, and in a region where human population would not have been dense prior to the great Exchange of Horticultural Products that began in the 15th century. (In fact if I were to pick the most likely local date formula for the extinction of Homo notsapiens globally, if there were a bunch of them, it would be the introduction of yams, manioc, maize, taro, or other staple plant brought in from the other side of the planet to grow locally.) This means the Flores hominid may have chipped its last rock when cassava or corn were first planted in the region, which would be very late and easily meet your criteria. I assume people are looking vigorously.

Yes, I just described Flores, but that's the point. Those are the characteristics that allowed for the Indonesian Leprechaun. We might look at regions covered by the last glacial ice mass, regions far to the east of Africa, dense tropical rain forest, etc.

This also predicts that stories of "the little people" (or "the big people" depending) would be distributed more commonly in a certain region of the world's map. Like this, maybe (and roughly):

Where to look for Leprechauns or Bigfoots.

I've ruled out the new world simply because. Bad reason, I know. It is entirely possible that the New World was thickly inhabited by Taltos and Leprechauns, the only really solid argument against that being a complete lack of evidence...

Thanks Greg! I can haz your book on my Kindle app...