Women in Prehistory: Who Made the Paleolithic Hand Impressions?

Dean Snow was one of my two advisors in undergraduate school. I have fond memories of all six months of college. But that's another story. Anyway, several years ago, Dean got wind of the research showing that humans exhibit sexual dimorphism in the ratios of the middle digits of the hand. It is believed that this is accounted for by differential rates of bone growth during early development that happen to be different, on average, between males and females. There is probably not an adaptive explanation for this. Rather, at some important developmental stage there is an endocrine effect on bone growth that happens to leave a signal we can use to tell males from females, to a certain degree.

Some of this research has gone so far as to suggest that the degree of differentiation relates to other behavioral traits. My favorite is the idea that among men, high level athletes have a higher ratio of finger length difference for the middle fingers than average men. Gay men, on the other hand, have even higher ratios. Therefore all athletes are gay. I won't bother giving you references for that work because I'm not interested in defending it or even suggesting it is true. I simply choose to believe it, for fun. Let the Evolutionary Psychologists work out the details.

Regardless of any behavioral links, this sexually dimorphic trait could be used to sex individuals. (That term "sex individuals" is a quaint way archaeologists say "determine the chromosomal sex of individuals using proxy methods such as brow ridges and stuff, like they do on the TV show Bones.") Dean's idea is this: If finger length ratio is sexually dimorphic, then we could potentially sex the wall hand stencils found in prehistoric contexts as part of the panoply of paleolithic cave art. 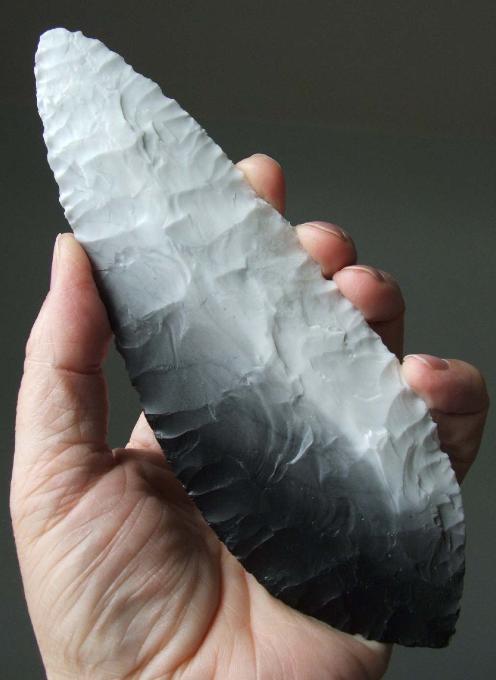 A phallus in the hand is worth ... oh, never mind.

The thing is, there are good reasons to believe that it is not true that females never did anything, ever. Females don't do nothing ever these days, why would that have been the case in the Palaeolithic? Also, think about the origin and evolution of technology. Chimps use a lot of technology. Virtually all chimp technology is used by females, invented by females, passed from female to female, and so on. Males don't seem to do any of that. Well, now and then a male is seen to wave a stick around, and one male chimp once picked up an empty gasoline can and waved it around. Publications ensued. But really, the chimp-human ancestor, almost certainly more chimp-like than human-like, probably used some technologies. If I had to guess, I'd say that the earliest chipped stone tools, the Oldowan and related industries, were made by females. These early tools were likely used to access embedded resources, and it is embedded resources we see chimp females (not males) access with technology.

Later, when our ancestors invented phallus shaped tools like spear points, perhaps males took over those technologies. Indeed, I would not be too uncomfortable with the hypothesis that the seminal spear points were a guy thing.

It is also true that men don't have a monopoly on art. Across the world we see art as an embedded part of cultures, and whether females or males engage in that activity varies a great deal. It might even be the case that among traditional substance or foraging groups females do more art than males. It is probably worth pointing out that one of the best places for art to show up is on cloth, or as part of the manufacture of cloth from fibers, bark, etc. We know from ethnography that this is more a female thing than a male thing. We also know that much of that material is not preserved, and it takes a great deal of effort to access that very important area of culture in prehistoric contexts. Anyway, if art is related to textile and related technology, than we can be pretty sure that early modern human females were doing art. If technology was invented by female chimp-like ancestors of humans than we can be pretty sure that females were involved in that too. In fact, the question we should be asking is this: When in prehistory did males start to do something interesting? 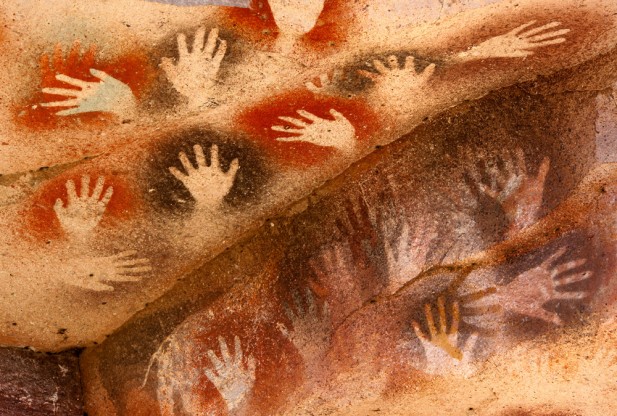 If we can sex hands by measuring digit length ratio, maybe we can tell if these hands are those of women or men. Here's Dean Snow talking about that prospect:

The people who I know that study the behavioral implications of digit ratios tend to use x-rays of the hand in order to get near perfect measurements of the bones. This cuts out some of the variation that make the process difficult. The actual distribution of ratios between males and females overlap a great deal. Here's a typical graph showing the distribution of measurements modeled as normal distributions:

Quite a bit of overlap

The problem in archaeology is that we are often stuck with data or methods that provide the opposite from the above mentioned x-ray machines. Archaeological data is usually messier than other forms of data. That certainly applies to hand prints on cave walls, which not only show the flesh and not the bones, but they are stencils, which have even less fidelity as indicators of fetal hormonal effects. But, it is certainly worth a look. Also, maybe, just maybe, there is more sexual dimorphism in certain Paleolithic populations which might make the signal more clear. It turns out, that may be the case.

Preliminary research on hand stencils found in the Upper Paleolithic cave sites of France and Spain showed that sexual dimorphism in human hands is expressed strongly enough to allow empirical determination of the sexes of the individuals who made some of them. Further research increased the sample of measurable cases from 6 to 32, a large enough sample to show that persons who made hand stencils in the caves were predominantly females. This finding rebuts the traditional assumption that human hand stencils in European parietal art were made by male artists, either adults or subadults. Findings further suggest that the sexual dimorphism of hands was more pronounced during the Upper Paleolithic than it is in modern Europeans. Attempts to apply the same algorithms to a sample of North American Indian handprints confirms the view that different populations require separate analyses.

Other work done by Snow and others suggests that this pattern does not hold across all populations of hands. One would not necessarily expect it to. As usual, further research is needed. In any event, for research on Palaeolithic images on cave walls, this is hands down one of the more interesting results.

Well, I had to follow up the caption on the first image with something.