One of the most important realizations of climate change research is exemplified in this graphic from Weather Uderground: 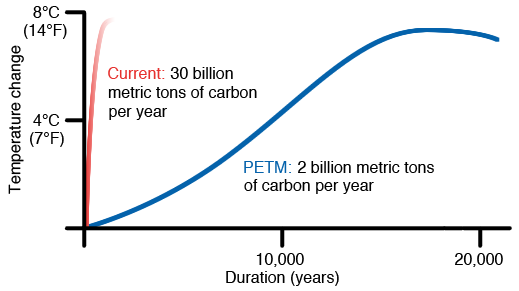 Caption from original: "Rate of temperature change today (red) and in the PETM (blue). Temperature rose steadily in the PETM due to the slow release of greenhouse gas (around 2 billion tons per year). Today, fossil fuel burning is leading to 30 billion tons of carbon released into the atmosphere every year, driving temperature up at an incredible rate.:

The point is this. The PETM (Paleocene-Eocene thermal maximum, millions of years ago) was a period of high levels of CO2 in the atmosphere which caused significant warming. It is an example of both relatively rapid and intense climate change caused by CO2 acting as a greenhouse gas. The red line is, of course, our current estimated rate of change given current rates of release of fossil carbon into the atmosphere. This gives scientists pause because the rate of change in a system is often a more significant factor than the state of a system after the change. A simple example is motion. Assume you are standing on a commuter train moving at 50 km/h. If the train suddenly sped up to 100 km/h it might knock you down and even cause injury. But if the train increased its speed by 1 or 2 km/h every minute or so, you would not even notice and eventually you would be cruising along happily at double the speed.

It isn't just the high rate of change in climate that concerns us. It is also the fact that this rate of change has never been observed in nature; we have no record of such a rapid and large change happening in the paleo record. For many aspects of the Earth's climate system, we simply don't know what would happen under such rapid change because there is no point of reference, no precedent, for such a thing.

But there is another graph that also shows a very high rate of change, in a different system, that may allow us to feel a bit better. One way to avoid such an increase in release of fossil Carbon is to rapidly transition to non-Carbon sources of energy such as solar. One way for that to happen is if solar energy become economically more viable very quickly. Ideally, the rate of change in the economic viability of solar energy would be very fast, enough to knock you off your metaphorical feet. And, apparently, that is the case. From a study described here:

From the source: "Solar is now – in the right conditions – cheaper than oil and Asian LNG on an MMBTU basis. Yes, we are using utility- scale solar costs in developing markets with lots of sun. But that describes the growth markets for global energy today. For these markets solar is just cheap, clean, convenient, reliable energy. And since it is a technology, it will get even cheaper over time. Fossil fuel extraction costs will keep rising. "

There are caveats, as noted. But solar power is, seemingly going to have its day in the sun sooner than later.

The single biggest problem (aside from politics) with wind and solar generation is storage. Not at the massive commercial scale - liquid salt and other thermal sinks can deal with that, but at the small scale level, such as your house. Battery technology is improving rapidly but still has a ways to go to bring the cost for a homeowner, or a small business, down to where the cost to install gets paid off in under a decade rather than the several decades it usually is now.

That is not a good reason to not put a solar panel on your roof, though. Especially if you have an electric car.

Also, I want to see electric snow blowers and such. Electric riding lawn mowers. They would be QUIET.

True but most people are going to look at the economics of adding solar to their roof. There again it is going to depend on whether they are going to store any excess or just supplement their utility providers power by pumping it into the grid (assuming they are allowed to).

If they are going to store it they then have to determine what the return will be over their expected time in that house and whether they can retrieve that investment if they move. Given the mobility of today's citizenry along with divorce rates etc. I suspect the average home ownership term is quite a bit lower than it used to be - see http://www.nahb.org/generic.aspx?genericContentID=110770&channelID=311 - by year 15 ~50% have moved on and right now for storage solutions that's about the payback time last time I looked.

Actually, adding solar is not linked to how long you live in a house any more than adding a new efficient furnace is.

Also, as far as I know the vast majority of people who do this in a residential setting don't store it, and selling to utilities is become very normal very fast. Every day something comes across my desk a pout that.

"America has the natural resources to meet its energy demand with clean, renewable energy. It's time to harness that full potential." http://clmtr.lt/c/FYj0fz0cMJ

True but most people are going to look at the economics of adding solar to their roof.

One way to look at it is as an investment. I realise that some states in the US make it ridiculously difficult and/or expensive, but let's presume you have a sensible local arrangement. For someone with a small amount of capital to invest, there are very few better investments. We have a small system which doesn't cover all our needs all the time, but we do have 2 quarters a year when our power "bill" is a credit. Seeing as we spent less than $4000 in the first place, that's pretty good. We couldn't have paid all our grid-supplied power costs from the interest on that amount for those quarters alone, let alone the reductions during the other, higher power use, six months of the year.

When you look at the sort of other spending people make on their houses - swimming pools, fancy benchtops in the kitchen, new bathrooms - solar isn't such a big spend and it's getting cheaper all the time. And it saves you money even when it doesn't make you money in places where FITs are absent or paltry.

The US Navy has been talking about generating hydrocarbon fuels from electricity. That is an ideal way to "store" off-peak electric power.

Once you have enough solar and wind to meet peak demands, you don't need "extra" generation capacity for the peak. You just need something productive to do with the off-peak power in excess of needs. Electricity to hydrocarbon fuels is exactly that.

The Navy has surplus electrical power and the ocean as a cooling system on the aircraft carriers that would do this: http://science.slashdot.org/comments.pl?sid=5007123&cid=46703095

Promising if the press release's hopes prove to work out.

Solar Power is indeed the future for an Eco-friendly world. The only problem is the huge costs involved, especially here in the developing countries.Grid power provided could be easily influenced by the enactment of legislation which would force them to buy the excess power generated from the solar powered homes. I also think the Developed world should pump in more resources/funding to initiatives that subsides or advocate for the use of solar power in the developing world, After all they are the major contributors to the green house emissions. What is this about the Climate Green Fund still underfunded?