I have a little "science by spreadsheet" project for you, concerning the relationship between El Niño and Atlantic hurricanes.

The chance of an El Niño event happening this year seems to go up every few days, with most, perhaps all, climate models suggesting that El Niño will form this Summer or Fall. Climate experts tell us that there are typically fewer hurricanes in the Atlantic during El Niño years. So, I was interested to see how many fewer. Also, there appears to be a different kind of El Niño that happens sometimes, perhaps more often these days as an effect of global warming, which is variously referred to as Modoki or Central Pacific El Niño. The definition of this type of event, and even whether or not it is real, is not well established, but it has been said that the effect of this version of El Niño on Atlantic hurricanes is different.

The data used for this analysis covers the period from 1950 to 2012, simply because that is the range of years for which El Niño and hurricane data are readily available for copy/paste into the spreadsheet. Aside from numbers of hurricanes, we'll look at the Accumulated Cyclone Energy index (ACE). This is a value calculated from the storms that occur, using measures of wind speed over the life of the storm. Since tropical storms and hurricanes vary in ways not captured by simply counting them, or even by counting them by standard categories (one through five), this measure is a better reflection of overall major storminess in the region. The following figure shows the relationship between ACE and frequency of hurricanes in the Atlantic Basin. Please keep in mind that the clear relationship between these numbers is a given: ACE is calculated, essentially, from Number of Hurricanes together with a measure of hurricane strength, so the same variable (number of hurricanes) is on both axes of the graph. The purpose of this graph is to give an idea of the variation of hurricane frequency around the measurement of overall energy in the system, so this really mainly shows how complex the manifestation of hurricanes in a given season is.

Now let's look at the relationship between the number of named Atlantic tropical storms, hurricanes, and major hurricanes, in El Niño, no-El Niño, and CP El Niño years, as well as the ACE.

Without bothering with any statistical tests or other mumbo-jumbo (this is Science by Spreadsheet, after all) we can see that the number of named storms, hurricanes, and major hurricanes, as well as the ACE index, are all higher in years that do not have an El Niño. But, it is also apparent (again, no statistical tests) that the difference is not huge. In other words, if you live in a hurricane susceptible area, and you are thinking that you're not going to have a problem with hurricanes this year because there will probably be an El Niño, think again. There are still going to be hurricanes. Also of interest is that CP El Niño years, of which there are only a few, are like regular El Niño years though maybe the reduced number of major hurricanes is a real phenomenon. (Also note, in these data most of the "CP El Niño" years are also El Niño years, but not all, in case you were trying to add up the values of N.)

Another way of looking at the same data is to ask what percentage of named storms develop into hurricanes, or major hurricanes, under these different ENSO conditions. Here are the percentages: 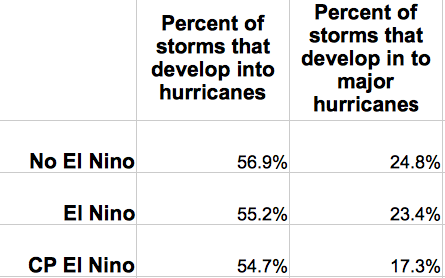 So, just over half of the named storms develop into hurricanes in an average year, regardless of El Niño, and about a quarter into major hurricanes. CP El Ninño years seem to show, as we saw above, less development of major hurricanes. But, the total number of these years is small, so this may mean nothing.

Remember last year's Atlantic hurricanes? No, nobody else does either. It was an anemic year for Atlantic hurricanes. This is attributed to the giant plume of Saharan dust that attenuated tropical storm development in the basin that year. It might be reasonable to say that the number and intensity of hurricanes per year is highly variable for a lot of reasons, and factors such as Saharan dust may have very large impacts on hurricane formation. In other words, the variation introduced into the system by El Niño may be important but not overwhelming.

In order to look at the overlap between El Niño and non El Niño years, I made this frequency histogram:

(Note that this frequency histogram uses intervals of 3 years; the one year on "30" is a year with 28 storms, falling into the interval 27.1 to 20. Science by spreadsheet has its limitations.)

"A graph showing the correlation between the and the number of major hurricanes which form in the Atlantic basin. Moving averages for AMO are by the years' average indexes, 5 years before and 5 years after, not the provided 121-month smoothing."

Hooray for "Science by Spreadsheet"!

Believe me for those that live in the hurricane belt a 20-30% drop in frequency is significant!

What is interesting is that the last bad storm year we had with charley, francis, jeanne and more was an el nino year, 2004. Also, andrew hut in el nino. I personally fear it regardless of the graphs.

Sallydi: There is new research just out, or just coming out, I've heard about but not yet seen supporting the growing idea that there are different kinds of El Niños and they have different effects. The observation you've made is key to that, probably.

No one is saying for sure but this particular El Niño, if it develops, looks like an EP El Niño, i.e., "typical" which will be linked, maybe, to fewer Atlantic tropical storms but much hotter conditions globally. We'll see!