In the event of a Moon disaster ...

We are celebrating an anniversary of Apollo 11's landing on the moon. Here, I simply post a memo from William Safire, speech writer, to H. R. Halderman, felon, providing text to be read by Richard Nixon, World's Worst President (of the 20th century), related to that Moon Landing: 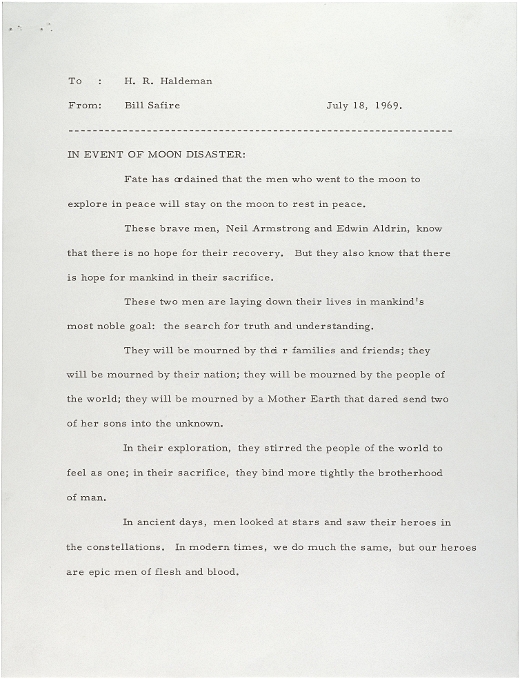 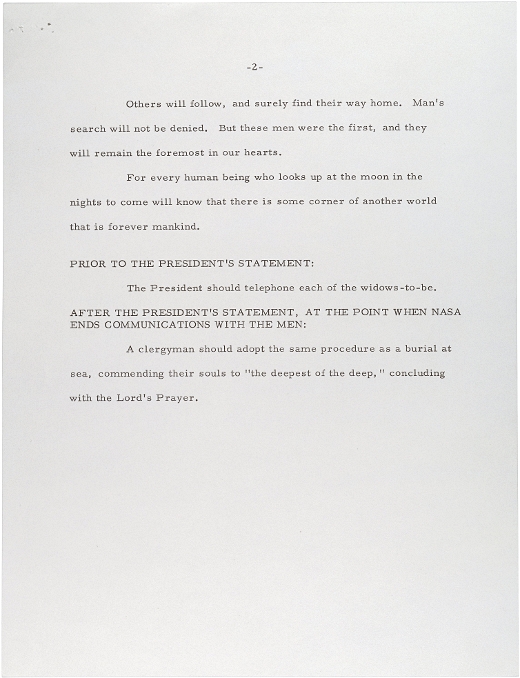 It was essential to have words prepared in advance, in the event that disaster struck the mission. That statement is a fitting and moving tribute. Thankfully it was not needed, and instead Apollo 11 stands as a pinnacle in human history.

Frankly I find it tawdry and demeaning to cast that statement in the light of partisan politics. In the Apollo era, Democrats and Republicans were still able to find common cause in issues such as environmental protection and space exploration. The fact that this is no longer the case, only points out how far we've fallen since that time.

Ultimately, getting our house in order is _our_ responsibility as voters, as we go to the voting booths in November.

Where was this cast in terms of partisan politics?

@Greg #2: Pretty blatantly in your editorializing about the occupants and employees of the White House during the time in question. "Felon" is an inaccurate description of the White House Chief of Staff in 1969, and "World's Worst President" in your personal (and therefore, by definition, "partisan") opinion.

Not that I disagree with either description, in the abstract. However, G's description of those editorial additions as "tawdry" is, I think, reasonable and accurate in context.

Michael, that was not editorializing. Halderman was a felon. He even served time. . Personally I think Nixon was the worst president of the 20th century and almost everyone in the world agrees with that. We can argue about his position relative to the 21st century. Context is important; imagine a Nixon in the 21st century with a Cheney as a VP and master! He might have been way worse than Bush. But these comparisons are difficult.

I did not carry out an extended immoral bombing campaign, I did not conduct an illegal war in a foreign country, I did not consider nuking the capital of an east asian nation, I did not engage in burglary and conspiracy and dirty tricks for the purpose of circumventing the democratic process, and so on and so forth. Yet, somehow, I'm the one that is tawdry? I don't think so! :)

This is not editorializing, just referring to well established fact or widely held opinion about facts.

I understand your point about mixing the good and nobel with the bad and ugly. But I have a reason.

People forget, you know. Just recently I was engaged in a conversation in which progressive environmentalists were going on and on about how great Nixon was because he allowed the EPA to exist. (I'm afraid this might be a side effect of current rhetoric intended to shame modern day GOPers into acting responsibly, but which has the unintended consequence of elevating folks like Nixon.) It is true that he signed environmentally progressive legislation but the basic nature of politics were very different at the time, and the particular environmental concerns of that day were mostly very visible. I lived near the Hudson River, which flowed through both conservative and liberal districts. Once the hippie punching got done, everyone living along the river wanted it cleaned up. You couldn't go near it because it smelled so bad. That was the day when rivers (well, one of them) were catching fire. . To have not signed into place environmental legislation would have been impossible. Nixon deserves no special credit for that.

My neighbors, some of them, died in that war during the time he extended it. Dozens of my friends were badly messed up by it, lost limbs, etc. etc. Once he was in charge, it was Nixon's war, and the inner circle were all hawks, racists (well documented), hippie punching megalomaniacs. This is not editorializing unless one believes in some sort of crazy false balance between good and evil.

So yes, I like to remind people that Nixon was a jerk and so were all of his friends. And no, it is established historical fact, not opinion.

@Greg: What you've written, including your opinions about it, are quite true, and important to keep fresh in people's minds.

However, I dispute that your description of Nixon as "World's Worst President" is anything other than your opinion. Reasonable cases could be made for several other of our Presidents (e.g., Harding in the 20th Century) being "Worst".

Your use of "felon" as the _job_description_ of the recipient of Safire's memo is Whiggish revisionism (and hence opinion). Haldeman was not a felon at the time: he became a conviced felon some 6-1/2 years later, and a parolee three years after that. In 1969, he was a political hatchetman,

In the interest of invoking the wrath of Godwin down upon me, here's another, equally extreme, example. In 1923, a really crappy painter and former WWI soldier tried to take over Munich. That's historical fact. If instead, I wrote that "In 1923, a mass murderer and war criminal tried to take over Munich," that would be the same kind of Whiggish revisionism, and it would be editorializing on my part. Yes, the crappy painter _became_ a mass murderer and war criminal, something none of us should forget, but at the time he wasn't yet.

Yes, that is my opinion, which I've modified (20th century). Nobody remembers Harding. That could matter.

But the point is, I'm entitled to making statements of opinion, even editorializing in this blog post.

I did not use the term "convicted" because he wasn't.

Pointing out well known historical facts about a person mentioned does not assume the reference to be made to a particular time or place.

You could say "Hitler, the genocidal maniac, started to take over Europe at the time he was a bad painter" and be correct. That is different from "Hitler, already established as a genocidal maniac who had already taken over much of Europe and parts of Asia and Africa busied himself with his latest badly done pairing. The year was 1932." That would be incorrect.

@Greg #6: You're absolutely entitled to opine, editorialize, or blather on incoherently :-) It's absolutely your blog to do with as you wish! And, as I've said, I don't actually disagree with either your statements or the impulse behind time.

I do disagree with your original assertion to 'G' that your choice of phrasing wasn't political -- and I think your own followups in our discussion have implicitly ceded that point.

Hopefully you haven't felt like this was a waste of your time. I think this discussion/debate/argument/whatever has been both fruitful and polite; thank you for engaging with me!