Monarchs and Milkweed: A Migrating Butterfly, a Poisonous Plant, and Their Remarkable Story of Coevolution

by Anurag Agrawal is a fantastic, readable, scientifically rich, detailed monograph about – you guessed it – the monarch butterfly and the milkweed plant.

The monarch butterfly begins a springtime northward migration by flying a good ways north, where females lay eggs and die. Then the eggs hatch, the caterpillars feed and metamorphose, and the newly minted butterflies then fly further north, and this cycle happens again. This happens a few times. The southward migration is different. The butterflies, which are across large areas of temperate North America, fly all the way south to their Mexican wintering grounds.

It is a widespread belief in America that monarchs rely on milkweed plants, and that the decline of milkweed explains an alarming decrease in monarch butterfly numbers over recent decades. That first belief is true: The monarchs lay their eggs on the milkweed, and the caterpillars feed on that plant. But it may not be true that a decline in milkweed is a problem for the monarchs. Agrawal makes a very good case that milkweed is not connected to monarch decline, and suggests but does not pin down other explanations.

Monarchs are bitter tasting and, actually, toxic. They are toxic because the caterpillars take in and sequester, and pass on to subsequent morphs, a specific toxin in milkweed. You probably knew that. But, did you know that there was a very clever and rather complicated experiment conducted in the 1960s that established this fact?

We often hear that there are two kinds of milkweed. There is the kind that monarchs lay their eggs on, and the kind that they don’t. We know this because, according to the Internet, some people, in an effort to save the monarch, planted the incorrect species instead of the correct species. 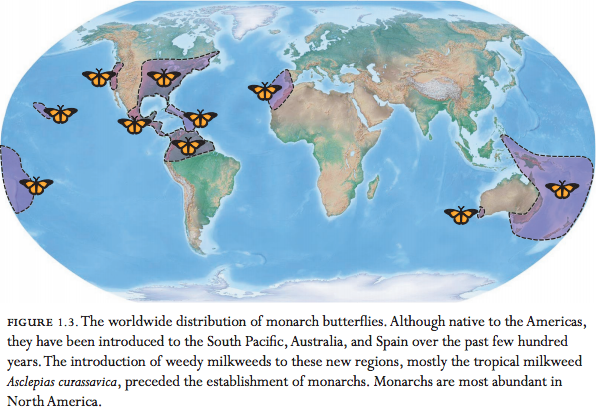 But did you know that there are 37 species of milkweed? Monarchs uses several species, but may prefer some. There are other butterflies that also rely on the milkweed (they are known as the “milkweed butterflies”).

The milkweed and the monarch have a tight and long term evolutionary relationship, both having adapted to the other’s adaptations, in a co-evolutionary story of epic proportions. But, this is not one of those stories of mutual benefit or cooperation. The monarchs exploit the milkweed, and the milkweed tries to defend itself, with only limited success. It is not a pretty picture, but it is a very interesting one.

Monarchs and Milkweed: A Migrating Butterfly, a Poisonous Plant, and Their Remarkable Story of Coevolution

is to date the coolest nature or science book I’ve seen so far this year. The year is young, but this book is fantastic, so I expect to see it finish in the top two or three, at least. Increasingly, I’m enjoying books written simultaneously for the general public as well as scientists, by scientists who know the material because they are among the contributors to the base of knowledge being expounded upon. This is an example; Anurag Agrawal is a professor in the Department of Ecology and Evolutionary Biology and the Department of Entomology at Cornell University. He lives in Ithaca, New York.

I highly recommend this book.

(By the way, if you've not read Flight Behavior: A Novel

by Barbara Kingsolver, about monarchs, climate change, an interesting family living in Appalachia and an interesting monarch butterfly research, you should!)

1 Welcome to the Monarchy 1

3 The Chemistry of Medicine and Poison 43

Us plant huggers find the flowers and their pollination fascinating too. Many hang pollen sacks on the legs of butterflies in a tricky way.
May I recommend butterfly milkweed (or just "butterfly weed") to gardeners, cause it's less weedy, beautiful orange flowers that come pretty late, tough as nails to drought. It's called Asclepias tuberosa for a reason - like a big parsnip under the ground. You don't need to think you are helping monarchs, just enjoy the several species of butterflies when they flower.