Scientists are now being subjected to unbridled McCarthyism.

Eventually the transcript will be available, but for now you'll have to just trust me on this. Congressman Clay Higgins, Republican on Lamar Smith's alt-Science committee, demanded today to know if climate scientist Michael Mann (author of The Madhouse Effect: How Climate Change Denial Is Threatening Our Planet, Destroying Our Politics, and Driving Us Crazy

, The Hockey Stick and the Climate Wars: Dispatches from the Front Lines

">this book) is a member of the Union of Concerned Scientists. It turns out that Mann is not. I wonder what would have happened if he was?

Anyway, after Mann answered the question, Higgins demanded that Dr. Mann provide proof that he is not a member of the Communist ... er, I mean, Union of Concerned Scientists.

I've heard that the only way to prove that you are not a member of the Union of Concerned Scientists is to be tossed in a pond, and if you float, you are a member. (Or do I have that backwards?)

Anyway, I made a nice card for Mike Mann to send in if he likes: 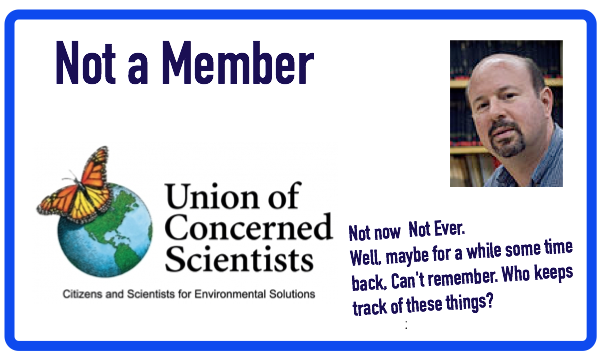 And, of course, the obligatory Monty Python video:

They seem to have video relating to this, titled

so I'm pretty sure there is (or soon will be) video of the incident available from reputable sources before long.

(Not linking because these types of sites typically try to put all sorts of junk on your computer when you visit. Go to the site at your own risk. Just make sure you haven't eaten right before you read their crap.)

Possible title for another blog post:
Why Republicans Killed America.

Added: according to the longroom site, the questioning was about "The Climate Accountability Institute?” and not the Union of Concerned Scientists.

Since I didn't watch the video they posted (per my first post) I don't know whether they are telling the truth.

Or try "I can neither confirm nor deny".

How about, to be topical "I could have just snuck into their meeting house and nobody would have seen me enter, but I didn't".

Since I don't know much about CAI and I know something about UCS (and the latter is well known) that is the one I picked to mention. So, whatever longroom is, it is telling some sort of lie or half truth or something.

I didn't mean to imply I doubted you - I meant to say I didn't know what was in the video on that website since I didn't watch the video.

Having watched the video of the event, Higgins was trying to build up to accusing Mann of hypocrisy by alleging that UCS supported use of RICO against fossil fuel companies supporting climate change denial– that claim seems to have come from denial blogs, the story in E&E reports a UCS statement that "Deception/disinformation isn't itself a basis for criminal prosecution under RICO": http://www.eenews.net/stories/1060037292

Saw the video at the house Science and Technology Committee website. What a bunch of specimens. Judith Curry looks like she was on drugs or something. Is there something physically wrong with her? Right side of the face was a not totally in sync with the left it looked like. Representative Higgins was a complete thug. Freaking neanderthal. Rep. Rohrbacher got in Mann's face for not giving the chairman, Lamar Snuffy Smith, enough respect. I was thinking maybe Dana was gonna have a stroke or something, he was really worked up, all because Michael Mann had the temerity to introduce an article from Science that pointed out something unflattering about Snuffy and his relationship with what I call the Heartworm Institute. One of the Republican dim wits, maybe Snuffy, said that Science and the Science writer who wrote the article were not reputable or something. Science is not a reputable "magazine"? Gee, that is the first I heard about that... coming from the party that prides itself in being led by total fucking liars, that is rich.. Total inquisition. Total farce.

On the good and hopeful side, Representative Bill Foster, with his PhD in physics, was brilliant. So was Elizabeth Esty who made that point that everyone on the panel agrees that humans affect the climate to some extent, and that we don't need to have lost a house to a house fire to still want to buy home owners insurance, therefore, we need to heed the warnings of scientists about future risks that will result from not doing anything about climate change..

The Republicans should market themselves as appetite suppressants. Largely a bunch of unprincipled dimwits, owned by the fucking oil companies and special interest groups. They are an embarrassment to the nation..

Interestingly, Higgins did not get a great deal of money from the oil industry, but his largest identified source of money was ideological groups. He was elected by people who like a gorilla to represent them. Sad. Maybe he is actually representing the northern most province of Rinkydinkeraugua. Total effing thug.