I can't give this a meaningful review because I don't have the setup to test it out, Coding iPhone Apps for Kids: A playful introduction to Swift

by Gloria Winquist and Matt McCarthy looks like it is up to the high standards of this publisher and these authors, and might be just the thing for your kid: 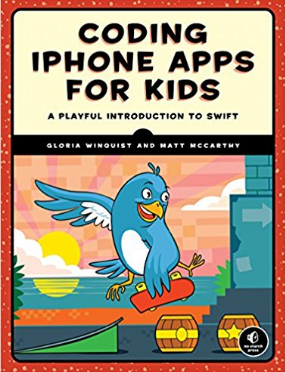 Apple’s Swift is a powerful, beginner-friendly programming language that anyone can use to make cool apps for the iPhone or iPad. In Coding iPhone Apps for Kids, you’ll learn how to use Swift to write programs, even if you’ve never programmed before.

You’ll work in the Xcode playground, an interactive environment where you can play with your code and see the results of your work immediately! You’ll learn the fundamentals of programming too, like how to store data in arrays, use conditional statements to make decisions, and create functions to organize your code—all with the help of clear and patient explanations.

Once you master the basics, you’ll build a birthday tracker app so that you won’t forget anyone’s birthday and a platform game called Schoolhouse Skateboarder with animation, jumps, and more!

As you begin your programming adventure, you’ll learn how to:

Why should serious adults have all the fun? Coding iPhone Apps for Kids is your ticket to the exciting world of computer programming.

Author Bio
Gloria Winquist became hooked on iOS development in 2011 and has been programming professionally ever since. She works as an iOS developer at LumiraDx.

Matt McCarthy has released more than 20 apps as part of a two-person team, Tomato Interactive LLC. He works as a software engineer at LumiraDx.

This is a good coding book, well written and with clear examples and illustrations. It contains some touches of humour directed to kids.
As indicated by another buyer, this is not exclusively directed to kids, but can be very useful for adults that want to inniciate in this fascinating
world.
I do recommend it.
http://tutuappvipdownload.com