It is amazing how little we know about animals

What is the mouse-elephant curve? This: 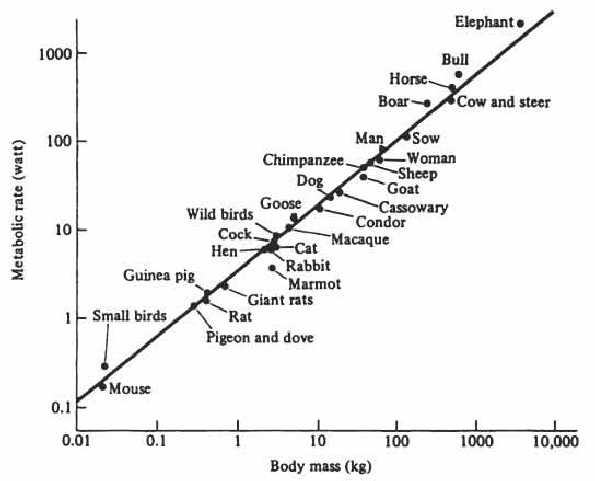 You take all the mammals from mouse to elephant, and plot their metabolic rate or, if you like, brain volume, or any other metric, against body mass. You may or may not log an axis. The final result is supposed to be a straight line that approximates all the points. Then, you can measure how "off" any given species is by calculating its residual, or, how far off the line it is. One well known outcome of this procedure is the term "relative brain size" which shows that humans have ginormous brains compared to everything else on the mouse-elephant curve, even though they do not have the largest absolute brain size. (Never mind that cebus monkeys have larger relative brains.)

Anyway, I was working on this and talking about it with my friend Mark Pagel who is a statistics expert and a biologist, and he said something like, "That's OK, but this is all theoretical, the mouse-elephant curve is made up."

"The metabolic rate scales to mass the way it does because body surface area scales allometrically to mass, right?"

"How many of the animals on the mouse elephant curve have ever been measured for body surface area?" he asked.

And that is when I realized that we know noting about anything.

Think about this for a second. You can find decades old texts explaining that mammals use XY chromosome compliments to determine sex. But where was the database for all mammals that showed the karyotype for each species? Nowhere. No one had done that. We probably had humans, mice, all the other lab animals of which there are probably about a dozen species, and the farm animals, of which there are probably fewer than a dozen species. That might seem like a good sample, but almost every farm mammal is a bovid, then you add horses, then you add close relatives in the old world murid family, and some closely related primates. Who knows, maybe they had more than that. But there could easily have been some subset of mammals that had independently and subsequent to their split from other mammals evolved a different chromosomal system. (There actually are multiple systems in mammals if you count ALL the mammals, but I'm speaking here of placental mammals.)

OK, maybe that is not easy to imagine, but it is possible to imagine.

The thing is, when it comes to organismic biology, we have made a huge mistake. Lots of research was done on a relatively small number of species, then rather suddenly, the fields of ecology and organismic biology were sidelines and everything became genetics. Genetics is nice and all, but it is not possible to directly answer every single question with just genetics.

This is why I was happy to see the beginnings of a project to cat scan all the cats, and along with the cats, all the other vertebrates.

I quickly add that even though the project is billed as scanning all the verts, and has in its various forms been called "scan all the frogs" or "scan all the vertebrates" etc, it is not that at all. At most, this project will scan a large but incomplete sample of genera, not species. And it really is a problem that they are claiming that they are scanning everything when they simply are not, because this will cause people to think this job is getting done when it is not.

Also, they are scanning a minimal number in each group, and only the available museum specimens. Museum collections are notoriously biased and there may be other problems with 3D morphology as well. Ultimately, a really useful project will scan a full range of development, multiple individuals at each stage, both sexes, etc. And, of I'm sure the folks doing this project understand this. And, eventually this may get done.

I wonder if it will be possible to use these scans to develop surface area estimates for several species of mammal ranging in size from, say, a mouse to an elephant? Of course not ... there are no preserved elephats, or for that matter, any large mammal, so all of those critters are not part of this "scan everything" project.... :(

The resulting 3D renderings will be uploaded to an existing digital depository, MorphoSource, created by Doug Boyer, an evolutionary anthropologist at Duke University in Durham, North Carolina, where they will be freely available for research in fields such as comparative anatomy, evolution, developmental biology, and biomimetics.

You can find out more about the project by clicking here, and depending on if you have a subscription, get either a summary or a more detailed accounting.

Speaking of dogs...Social mammals have bigger brains than solitary mammals

You know that age-old argument dog people and cat people can't ever seem to agree on? The one about whether dogs or cats are smarter? Well, we may finally have an answer! (Spoiler alert: I'm pretty stoked, as a dog person.) According to a new study by Oxford University, researchers have discovered…

So, dolphins are dumb and manatees are smart?

Yesterday, we were putting down media reports on a study that purports that dolphins are not intelligent despite behavioral studies and big brains. Today, NYTimes has a much better article arguing that manatees, despite their small brains, are more intelligent than previously thought. It is a…

Does circadian clock regulate clutch-size in birds? A question of appropriatness of the model animal.

This post from March 27, 2006 starts with some of my old research and poses a new hypothesis. The question of animal models There are some very good reasons why much of biology is performed in just a handful of model organisms. Techniques get refined and the knowledge can grow incrementally until…

Does circadian clock regulate clutch-size in birds? A question of appropriateness of the model animal.

This post from March 27, 2006 starts with some of my old research and poses a new hypothesis. The question of animal models There are some very good reasons why much of biology is performed in just a handful of model organisms. Techniques get refined and the knowledge can grow incrementally until…

Question for knowledgable readers.
Is there a simple method to accurately determine surface area?
Weight and volume are easy peasy but its doing my head in trying to think of a simple foolproof methodology.
Obviously things like fur or feathers complicate a calculation.
And some species might have a very high surface area for special reasons. Like a ballooning spider.
Any help appreciated. Thanks.

Li D: dip them in paint and determine the change in weight? :-)

#2 does not overcome the fur & feathers problem though.

Surface area of an animal with feathers almost becomes a problem involving fractals (ever carried out macro-photography of a feather) — now there is an idea.

Many other threads of interest in Richard Dawkins' book The Ancestor's Tale — review which should be studied quietly for it could be a long read but well worth the effort.

One of the interesting 'brain size' discourses is to do with the seemingly disproportionate proportion of brains used to deal with senses through organs and body parts of particular utility to the owners, like hands with humans and and the nose and whiskers of burrowing animals.

Given one of Dawkins' diversions in this book, as mentioned in the review, it is probably fortunate that Dawkins put this book to bed before the advent of Trump as POTUS.

Dipping in paint is a great idea for individuals within a species. Between species, the surfaces may vary too much.

I would suggest 3D surface topography with scanners and then basic 3D software.

Right,the proportion of total brain volume as function of different areas' enlargement matters a great deal. Thus, brain size comparisons at some point need to be done within higher-order but not too-higher order taxonomic groups (i.e., within simian primates, or within major groups of rodents, etc.)

Emulsion or water based? Matt or silk?

To be a little serious, you need to shave them first. Which they may object to a bit. And you'd need a lot of different sizes of bespoke safety razor!

That's true of Medicine too. We medical types used digoxin for heart failure for more than a hundred years. Over that time the predominant cause of heart failure changed from rheumatic valvular heart disease to ischemic cardiomyopathy. When I was but a wee doctor, everyone with heart failure form ischemic cardiomyopathy was prescribed digoxin, but there was little data for its use in that setting. All the cardiologist knew this and knew the history of the changing cause of heart failure. They even taught that to all the young doctors, but digoxin was still widely used. It took a long time for the science to catch up to the common dogma.

Wouldn't that be the dogma having to catch up with the science? The dogma was "use digoxin". The science said "The cause is different to the one this was tested against", but the dogma would not condone looking again.