Challenge to climate deniers: Can you top this?

The British (including the Northern Irish) have all the fun. Guardian columnist George Monbiot has just launched the Christopher Booker prize, to be awarded to whoever "manages, in the course of 2009, to cram as many misrepresentations, distortions and falsehoods into a single article, statement, lecture, film or interview about climate change." It's named after a columnist at the competing Telegraph, a man who manages to get just about everything wrong, and not just about climate change.

Booker's most recent column, in fact, is a collection of misrepresentations on the subject of biological evolution. To wit:

One great stumbling block to [Charles Darwin's] argument is that evolution has repeatedly taken place in leaps forward so sudden and so complex that they could not possibly have been accounted for by the gradual process he suggested - "the Cambrian explosion" of new life forms, the complexities of the eye, the post-Cretaceous explosion of mammals.

It is understandable that someone unfamiliar with punctuated equilibrium should so misconstrue its details. (Wiki has a good summary here. And you can read Gould and Eldredge's paper introducing the whole subject here if you're interested.) But then, one might w0nder why the Telegraph would pay someone to write on subjects about which he knows so little.

Monbiot is more concerned about the errors in Booker's climate change commentaries, though. Trashing Darwin may be disgraceful, but misleading readers about the most serious public policy challenge facing society is worse, it would seem. So for the next year, Monbiot be asking his friends in the climatology community to help him evaluate nominees for the award, which is a: 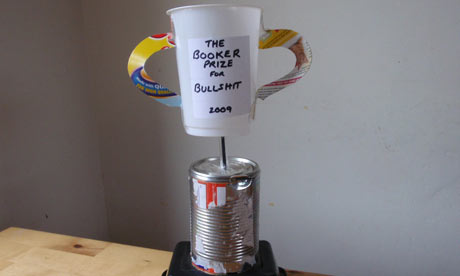 ... stylish trophy is made entirely of recycled materials!

Lovingly fashioned by master craftsmen in mid-Wales, it shows what can be done with items that are often treated as mere rubbish!

And this isn't all. I am suggesting that the winner of the Christopher Booker prize 2009 take the holiday of a lifetime: a one-way solo kayak trip to the North Pole. Following in the footsteps of the great Pen Hadow, the award winner could use the trip to see for him or herself the full extent of the Arctic ice melt. The Guardian will support this intrepid venture by supplying THREE BARS of Kendal mint cake towards the costs of this expedition.

Nominations can be made online here.

Nominate any single article, statement, lecture, film or interview which you think misrepresents or distorts information about climate change. This work must be available online. One point is given for every mistake made in our opinion, though one point will be deducted for every retraction or correction published by the author or the original outlet within a reasonable period of time.

I'm sure Americans can come up with someone to rival Booker. Deadline is Dec. 31.

Maybe Behe might qualify as Booker's US counterpart ... he did say that, under his definition, astrology is a science. That's pretty good. And, he does think of himself as a scientist.

Oh this is sooooo satisfying. I have friends who think that I am "duped" by all these mad scientists claiming AGW, and they send me links to all of Christopher Booker's articles as evidence.

Who would have thought that goodie two shoes USofA, up holders of all thing good and democratic, would be the 1st one to violate this.

King of course really means 1st one for peak oil, as most wars are mostly about resources arenât they?

David King: Iraq was the first âresource warâ of the century
http://www.guardian.co.uk/environment/2009/feb/12/king-iraq-resources-w…

UK governmentâs former chief scientific adviser says Iraq war was about oil, not weapons of mass destruction â and warns there will be more âresource warsâ to come

Booker sounds just like the YEC I heard speaking last night. What a good way to lose credibility.

How come no one is commenting on thisâ¦

The planet will be in âhuge troubleâ unless Barack Obama makes strides in tackling climate change, says a leading scientist.

Prof James McCarthy spoke on the eve of the annual meeting of the American Association for the Advancement of Science (AAAS), which he heads.

I note that "Bob R" is not even wrong.

Link to Booker's column on Darwin is wrong - it just goes to his column on global warming.