Mantis shrimps have a unique way of seeing

Eagles may be famous for their vision, but the most incredible eyes of any animal belong to the mantis shrimp. Neither mantises nor shrimps, these small, pugilistic invertebrates are already renowned for their amazingly complex vision.

Now, a group of scientists have found that they use a visual system that's never been seen before in another animal, and it allows them to exchange secret messages. 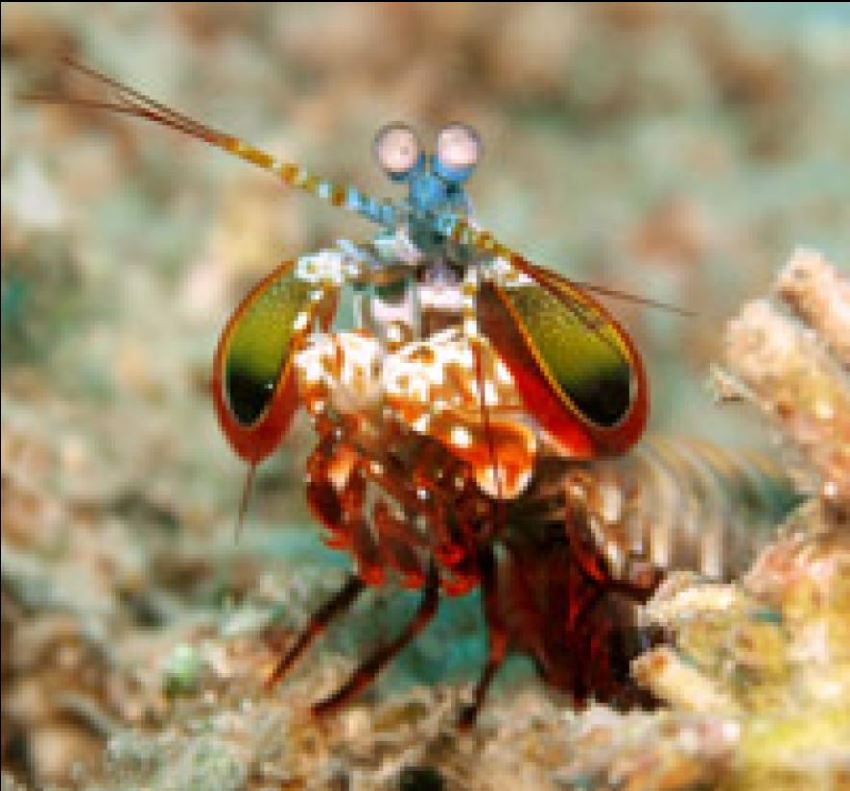 Mantis shrimps are no stranger to world records. They are famous for their powerful forearms, which can throw the fastest punch on the planet. The arm can accelerate through water at up to 10,000 times the force of gravity, creating a pressure wave that boils the water in front of it, and eventually hits its prey with the force of a rifle bullet. Both crab shells and aquarium glass shatter easily.

As impressive as their arms are, the eyes of a mantis shrimp are even more incredible. They are mounted on mobile stalks and can move independently of each other. Mantis shrimps can see objects with three different parts of the same eye, giving them 'trinocular vision' so unlike humans who perceive depth best with two eyes, these animals can do it perfectly well with either one of theirs. 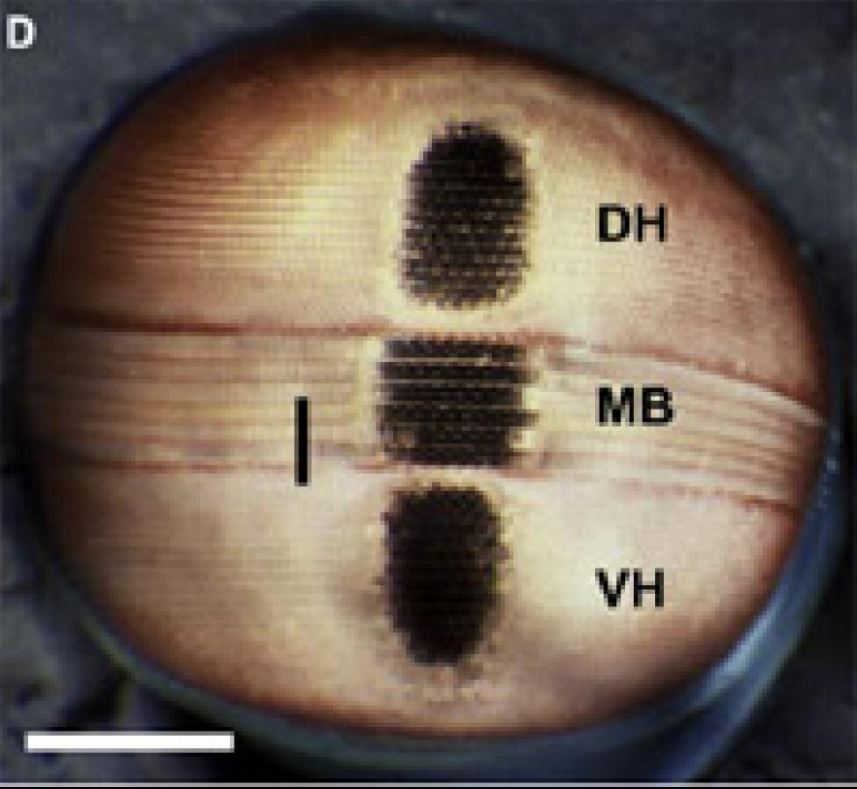 Their colour vision far exceeds our too. The middle section of each eye, the midband, consists of six parallel strips. The first four are loaded with eight different types of light-sensitive cells (photoreceptors), containing pigments that respond to different wavelengths of light. With these, the mantis shrimp's visible spectrum extends into the infrared and the ultraviolet. They can even use filters to tune each individual photoreceptor according to local light conditions.

The fifth and six rows of the midband contain photoreceptors that are specialised for detecting polarised light. Normally, light behaves like a wave that vibrates in every possible direction as it moves along. In comparison, polarised light vibrates in just one direction - think of attaching a piece of string to a wall and shaking it up and down. While we are normally oblivious to it, it's present in the glare that reflects off water and glass and we use polarising filters in sunglasses and cameras to screen it out.

Light can also travel in a the shape of a helix, moving as a spiralling beam that spins either clockwise (right-handed) or anti-clockwise (left-handed). This phenomenon is called 'circular polarisation'. Tsyr-Huei  Chiou from the University of Maryland found that the mantis shrimp's eye contains the only known cells in the animal kingdom that can detect it. Our technology can do the same, but the mantis shrimps beat us to it by as much as 400 million years.

Sitting atop these seven cells is an eighth rhabdom. In the fifth and sixth rows of the midband, the microvilli in this eighth cell are precisely aligned and everywhere else (and indeed in all other crustaceans), they are randomly arranged. It's this key innovation that allows the mantis shrimp to see circular polarised light.

The eighth rhabdom creates a slit that's angled at 45 degrees to those created by the seven cells underneath, precisely the precise angle that converts circularly polarised light into its linear version. The light is converted differently depending on whether it spins left or right, and this activates different groups of rhabdoms. When Chiou recorded the electrical activity of the seven underlying rhabdoms, he found that some were only sensitive to right-handed circularly polarised light, while others only responded to the left-handed variety. So in theory, mantis shrimps can not only detect circularly polarised light, they can also tell which direction it's spinning in.

Chiou provided further evidence of this ability by training mantis shrimps to associate either left-handed or right-handed circularly polarised light with a food reward. After the lessons, he gave them a choice between two food containers that reflected circularly polarised light spinning in different directions. As expected, the animals were more likely to choose the container whose reflections matched those that they had been trained to prefer.

Tellingly, males and females produce these reflections from different body parts that are commonly used for signalling during courtship. Chiou speculates that amorous mantis shrimps use circularly polarised light as a secret communication channel. Mantis shrimps use linearly polarised light for this purpose too and while many predators can't see these codes, they are all too visible to cuttlefish, squid and octopus that prey on mantis shrimps. The animals avoid that risk by using a signalling method that their eyes and theirs alone can see.

Chiou also noted that some species, including the beautiful peacock mantis shrimp, are more sensitive to circularly polarised light than others. Their communications may be so secret that even other mantis shrimps can't see them.

(As a sidenote, there's a bit of debate among my fellow Sciencebloggers about the coolest marine invertebrate. Personally, I think mantis shrimps kick the crap out of sea cucumbers, but they're on a par with squid, which incidentally also use polarised light for secret communication.)

Updated: The war continues. Bora sides with Sheril on the sea cucumbers but John Wilkins throws down on the side of mantis shrimps. Kevin comes in out of left field with a vote for barnacles. In geek wars, everybody wins...

I agree. I want one.

I want to BE one!

This is a shout-out to Peter, a commenter over at Deep Sea News, who came up with the best description of a mantis shrimp I've read yet:

"They break things with a cavitation hammer. Kind of like Thor."

Mantis shrimp are very cool. I wasn't sure if they were the coolest until I watched the video and saw the German name for mantis shrimp "fangschreckenkrebse" which loosely translates to "scary-claw crab". With a name like that, they have to be the coolest marine invert.

Well-spotted - the awesomeness continues! Surely the battle is now over? On a related note, one of my friends refers to mantis shrimps as "explodo-prawns".

"The arm can accelerate through water at up to 10,000 times the force of gravity, creating a pressure wave that boils the water in front of it, and eventually hits its prey with the force of a rifle bullet"

Does the acceleration or even striking objects with this kind of force not eventually damage the shrimp's arms?

Yes - the boiling water in particular heavily pits the surface of the club, but mantis shrimps cope with that by moulting the outer layer of their arms every couple of arms. They have a continuously regenerating smashing surface.

These guys could be the greatest artists in the world, and we wouldn't be able to see why.

Very interesting article. I read that the mantis shrimp's claw is protected with hard minerals. Were do they get these from?

Mantis Shrimp are known to fishermen as "Thumbsplitter".
Reef aquariats sometimes get Mantis Shrimp as hitchhikers on reef rocks. They typically have to be trapped out due to their predatory and destructive nature. My fascination for them is now such that I'd like to keep some on purpose, with suitably thick glass of course.

If the smashers only eat hard shelled animals.... do you think it will eat a sea cucumber if i put one in my tank?

One more point for the mantis shrimp: it is one of the very few animals that evolved rolling. Well, it kind of rolls, by performing several successive somersaults (according to Wikipedia). Which is even cooler.

These little guys are just the coolest thing. I'm planning on getting a tank set up once I move to another house, anyone know of a good place to order one online if I find the local aquarist store doesn't carry smashers? They had a list of incoming shipments, and mantis shrimp was listed, but it didn't say what kind.