By tsaunders on May 20, 2010.
The following post was originally published on Obesitypanacea.com on October 7, 2009. 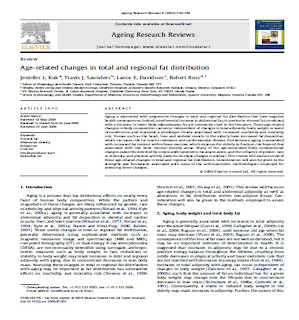 As many of our readers know, I performed my MSc under the direction of Dr Bob Ross at Queen's University (Peter recently completed his PhD in the same lab).  Dr Ross is a world leader in the measurement of body fat and body fat distribution, which is why many of our publications focus on the associations of various body fat depots with markers of metabolic risk.  During my time at Queen's I was also fortunate to work with Drs Jen Kuk and Lance Davidson (now at York and Columbia respectively), who were also studying with Dr Ross.  In the current issue of Ageing Research Reviews, Drs Kuk, Davidson, Ross, and myself review age related changes in body fat distribution in a paper creatively titled "Age-related changes in total and regional fat distribution".

Research from Dr Ross' lab, as well as research done by other groups, has consistently shown that visceral fat is strongly associated with increased metabolic risk.  As part of her PhD thesis, Dr Kuk has even shown that visceral fat is an independent predictor of mortality.  In contrast, after controlling for abdominal fat, the accumulation of lower body subcutaneous fat (the fat just beneath the skin) is often reported to be associated with reduced metabolic risk.  Take for example my MSc thesis which found that after control for abdominal fat, lower body subcutaneous fat is negatively associated with triglyceride levels, and positively associated with HDL cholesterol in elderly men and women.   In other words, if two people have the same amount of abdominal fat, the one with more leg and butt fat is likely to be the healthier of the two.

All of this brings me to our current review, which summarizes the changes in these and other fat depots with normal ageing.  As you might expect, the changes are not good - there is a progressive increase in total abdominal fat (and especially visceral fat), as well as a progressive loss of lower body subcutaneous fat.  So there is more of the bad fat, and less of the good fat.  What's more, these changes can occur even without changes in body weight or waist circumference.  So even without gaining weight, body fat percentage tends to increase with age, and the increase is mostly due to increases in the worst fat depots.  These changes can be seen especially clearly in this image that I created for my thesis introduction (I knew this would come in handy someday!).  Note that although both individuals have a waist circumference of 106cm, the older individual has dramatically more visceral fat, and less thigh subcutaneous fat. 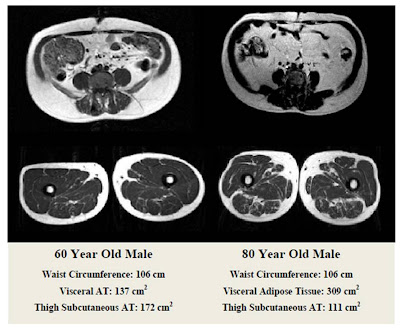 Unfortunately there are other negative changes in body fat distribution with age, including increased fat storage in the heart, liver, bone marrow, and skeletal muscle, all of which are associated with increased metabolic risk, as well as increased risk of fractures in the case of bone marrow.  And as mentioned before, none of these changes are readily apparent when obesity is being measured by BMI or waist circumference alone, which are the most common measures used in the field (and which are pretty accurate in their own right).

But wait - it's not all bad news.  As part of his PhD thesis, Dr Davidson has previously shown that exercise is able to reduce total fat and visceral fat, as well as dramatically improving metabolic risk and functional health in elderly men and women.  So while normal ageing is associated with detrimental changes in body fat distribution, exercise can dramatically reduce these effects.  For what it's worth, Dr Davidson's work has also shown that a combination of aerobic and resistance exercise is the ideal strategy for improving both metabolic and functional health in the elderly.  It doesn't have to be intense (Peter and I helped oversee the resistance exercise in that study, and it was very low intensity for some individuals), but it can have a large impact on your quality of life.  Remember - no matter what your age, it's never too late to improve your health with a little exercise.

Enjoyed this story? Subscribe to Obesity Panacea and have future stories delivered regularly to your email account or your RSS reader.

Thanks for putting the idea out there that even people who are not gaining weight should exercise. Not to mention helping to dispel the myth that it's all about weight/size.

I attended the New York Obesity Research Center Weight Loss Program at St. Luke's for 2.5 years. One of the group leaders, Rich Weil, a well known and published exercise physiologist, showed our group a CT scan similar to the one shown in your post. However, the scans he showed us compared visceral fat content in an individual before and after exercise, demonstrating dramatically that visceral fat, unlike subcutaneous fat, is extremely sensitive to exercise. The decrease in visceral fat in the "after" scan was remarkable when compared to the "before" scan. I will never forget this and it has really motivated me to exercise more.

Exercise will not necessarily decrease a person's girth, but the positive results of regular exercise should show up in the person's blood work.

You're absolutely right. I think it's really important to really across the message that exercise has tremendous health benefits with or without weight loss. I will try to find a CT scan similar to the one you describe Miriam, because it really does do an excellent job of illustrating the benefits of exercise, regardless of body weight.

I think this kind of frustrating, because some people tend to gain weight around the middle, while others gain more below the waist. I exercise a lot, but unfortunately have still gained weight around my waist as I've gotten older. I eat a pretty healthy diet, and have no health problems related to weight (yet). There just doesn't seem to be a whole lot I can do about the fat around the middle - I mean, if biking 80-100 kms a week isn't effective, what will be? I work full time, and have kids, so it's not as if I can spend all my time exercising...

This is so interesting! I recently went from regular exercise to sedentary for about 6 months. My weight stayed 120 lbs the whole time, so I was kidding myself that I was still okay. Sure, my jeans got a little tighter, but told myself that once I toned up I'd be fine. Now I'll have that image of visceral fat to help keep me motivated. Thanks!