Rhett at Dot Physics departed ScienceBlogs before NAtional Geographic fully took over, but still managed to connect with their book division for a physics text. This is part of a series they're doing tied in with the folks from Rovio, makers of the world's most popular smart-phone time-waster, and, as the title suggests, it uses Angry Birds as a jumping-off point to talk about physics. Rhett was, of course, an obvious choice for this, given the amount of time he's spent doing video analysis of Angry Birds to extract the underlying physics.

This is a book that can't really be reviewed just as text, because images are pretty integral to the whole thing. Here's a screenshot of a fairly representative page: 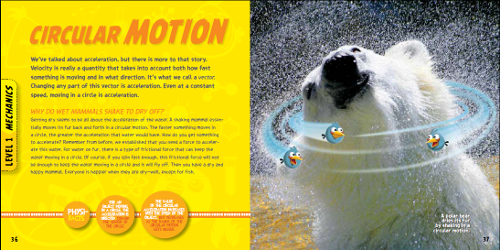 This is indicative of the format: a page of text, and a big splashy image, often with Angry Birds characters added digitally. The text is very characteristically Rhett-- this might be the most blog-like book I've ever read, and that's a good thing. The approach to physics is very much in the Matter and Interactions sort of terms he uses, and the text features lots of little asides in his usual style.

I was a little surprised to find that this covers more than just the physics that's in the game. In fact, it's a quick survey of all of physics, from basic mechanics up through the Standard Model. As a result, the connection to the game gets a little strained at points, but then, it would be hard to do a whole book with just mechanics without getting into the math. And while there are occasional equations included as design elements, this is not a mathematical treatment.

So, what's the target audience for this? Well, the day my review copy arrived, it was lying on my desk when SteelyKid came bopping in. "What's this?" she asked, noticing the eye-catching cover (reproduced as the "featured image" above")."

"It's a book about Angry Birds, and science," I told her.

So, to the design folks at National Geographic books: Well done.

I've long maintained that Dot Physics is one of the best blogs around, and this carries that basic flavor over into book form. It's not something that will help you get a 5 on the Physics AP exam, but it should appeal to anyone who enjoys, say, the Basher book on Physics. Plus fans of Angry Birds. And there's a lot to be said for catching potential science fans young.