To your naked eye, the night sky appears littered with thousands of individual points of light: the stars and planets so familiar to us. But through even a small telescope or a pair of binoculars, not only do the number of visible stars increase into the hundreds-of-thousands or even the millions, but a slew of deep-sky objects become visible to us as well. Each monday, we highlight one of the deep-sky objects from Messier's original catalogue. Here on Starts With A Bang, it's time for another Messier Monday! 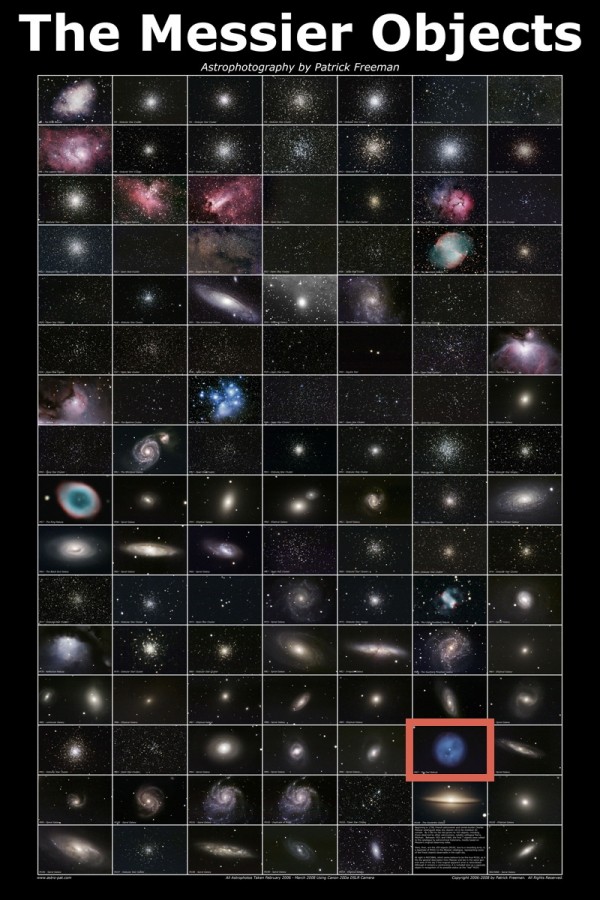 Image credit: Patrick Freeman, of http://www.astro-pat.com/; box around M97 by me.

While most of the Messier objects are either open star clusters, globular clusters, or galaxies, there are a few rarities that turn out to be sites of extreme star birth or death within our galaxy. There's only one supernova remnant in Messier's catalogue, but the second rarest type of object -- of which there are only four -- are the Planetary Nebulae. Today, we're going to take a look at the Owl Nebula, the 97th object in Messier's catalogue. 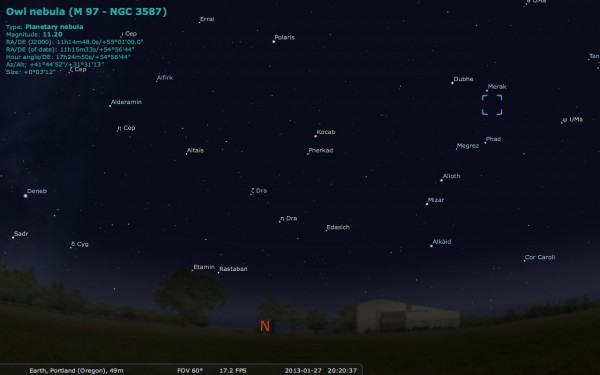 To find the Owl Nebula is a straightforward but observationally challenging task, as it's one of the faintest objects (at magnitude +10) in the entire catalogue! If you can find the Big Dipper in the northern part of the sky, locate the 2nd-to-last star in the cup area, Merak, and backtrack just about three degrees towards the other star (Phad) that marks the bottom of the cup. 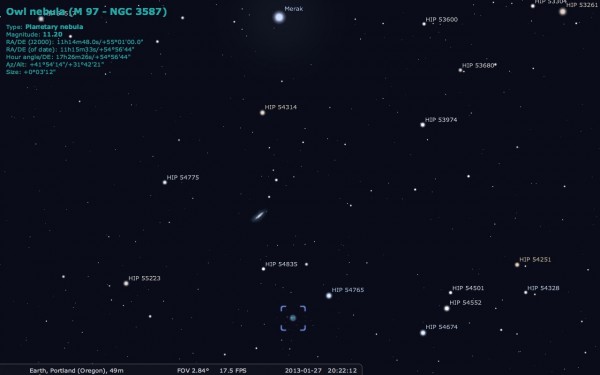 Located among the stars, past the faint, elongated object (that turns out to be another Messier object in its own right), you'll find a small, faint spherical object, only about three arc-minutes (or one twentieth of a degree) in diameter.

To the naked eye through a telescope, it appears whitish and faint, and you might mistake it at low magnification for some type of puffed-up star. But if you're willing to do long-exposure color photography, you'll find a greenish core surrounded by a reddish outline. 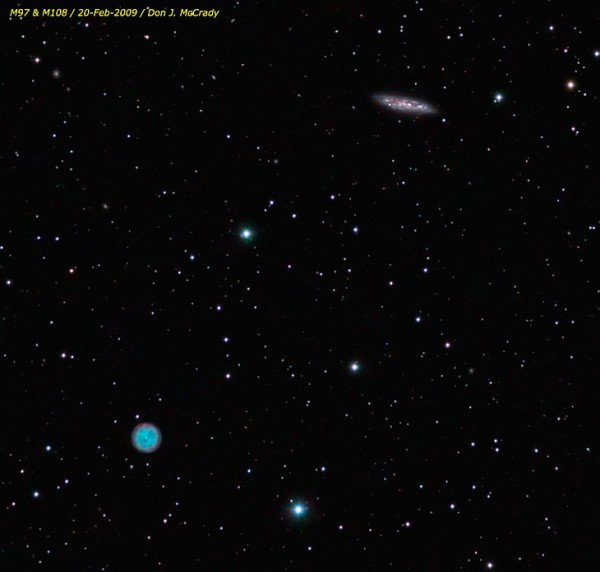 Oh, and if I hadn't yet mentioned it, there are two dark "eyes" in the center of this nebula. What's going on here?

First off, this is no star. At least, not anymore. When stars between about 40% and 400% the mass of the Sun run out of their hydrogen fuel, they move on to burning helium into heavier elements, and continue to do so until the core temperatures and densities, high though they may be, are not high enough for any further nuclear fusion to occur.

And when that happens -- and it will happen to our star, too -- the swollen, giant star dies in a gentle-but-spectacular fashion. 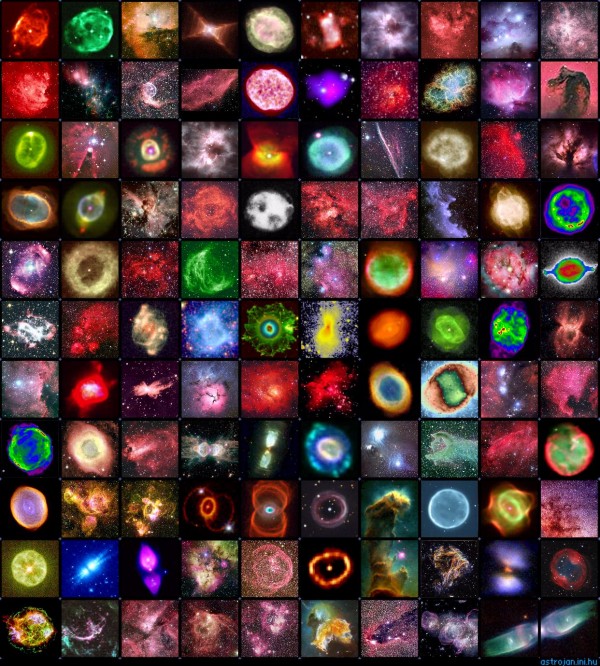 Image credit: http://astrojan.ini.hu/, retrieved from Margaret Hanson, U. of Cincinnati.

The outer layers of the star are gently blown off over thousands of years, forming a planetary nebula, while about the inner 50% of the star contracts down to form a very hot, dense, and small objects known as a white dwarf. It was not known, when they were first discovered, that these nebulae were related to the death of a star, and so planetary nebula is a misnomer, but it's already stuck.

Not that we knew what we were looking at, anyway. The first recorded sketch of the Owl Nebula comes from Lord Rosse in the 1840s, and he's the one who coined the term "Owl Nebula." Want to see his sketch? 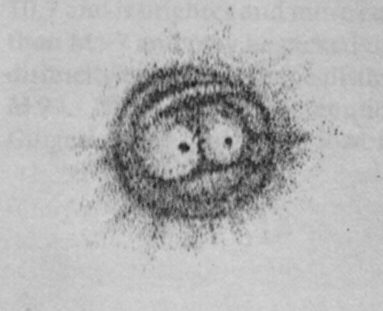 Yeesh!! The second "star" (or point of light) was never confirmed by his contemporaries nor by anyone else, but the name stuck. What causes this owl-faced feature?

Only about 20% of the planetary nebulae we've discovered are roughly spherical; the other 80% eject a large amount of their matter in two opposing directions, and take on a more axisymmetric shape. 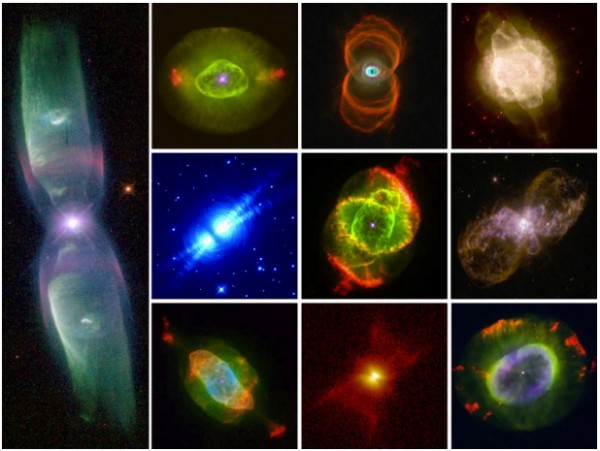 In the case of the Owl Nebula, these two jets are almost aligned with our line-of-sight, but are slightly off, and it's the neutral dust in those jets that blocks a sufficient amount of light from the expanding shell to cause the dark "eyes" to have their observed appearance.

Let's take a look at a better, high-quality image of the Owl Nebula for a superior view. 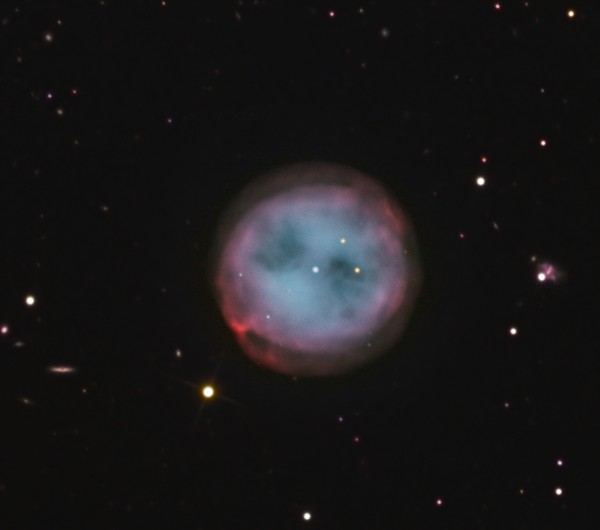 The different colors -- green/blue on the inside, red on the outside -- show off the presence of different elements. Hydrogen provides the red on the outskirts, which makes sense, since the outermost layers of a star this massive will be mostly hydrogen. The inner colors are caused (mostly) by the strong presence of oxygen, which has a prominent line at about 500 nanometers.

If you view this through a large telescope (8" or bigger in aperture), you may also notice that one of the eyes is "darker" than the other. 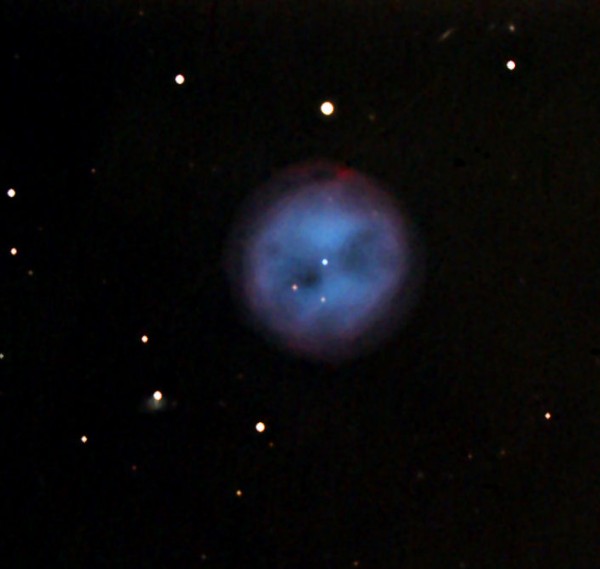 This nebula is about three light years across and is around 6,000 years old. The star it came from was originally somewhere between 150%-to-200% the mass of our Sun, and the white dwarf at the center is now about the size of Earth, 70% the mass of the Sun, and at a surface temperature of around 100,000 Kelvin. (Or a temperature nearly 20 times that of our own Sun!)

But despite its seemingly simple, spherical structure, a closer look shows that there an amazing and intricate structure to this stellar remnant. 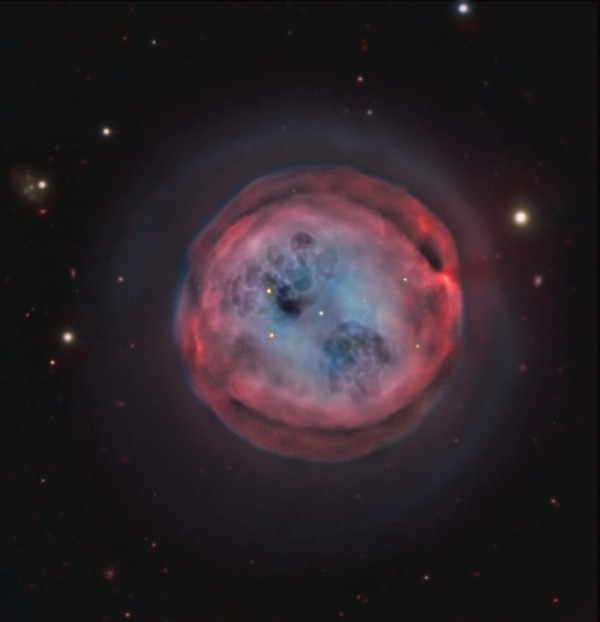 There are plenty of other views that showcase the presence of different elements, including this one that showcases hydrogen, oxygen and silicon (all in false color) below. 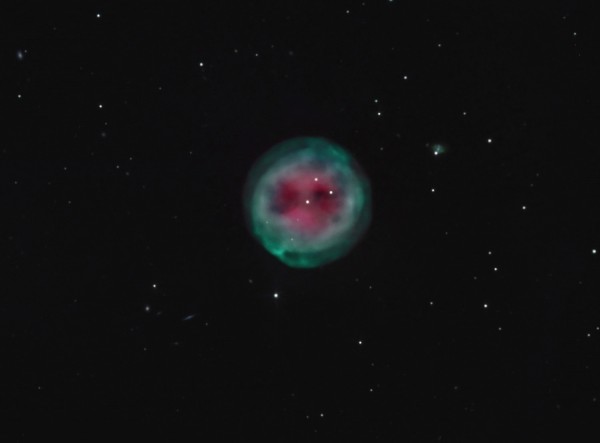 The Owl Nebula has also been looked at in ultraviolet light, which uniquely shows off the gas surrounding the nebula. (And the one surprisingly very blue star near it.) 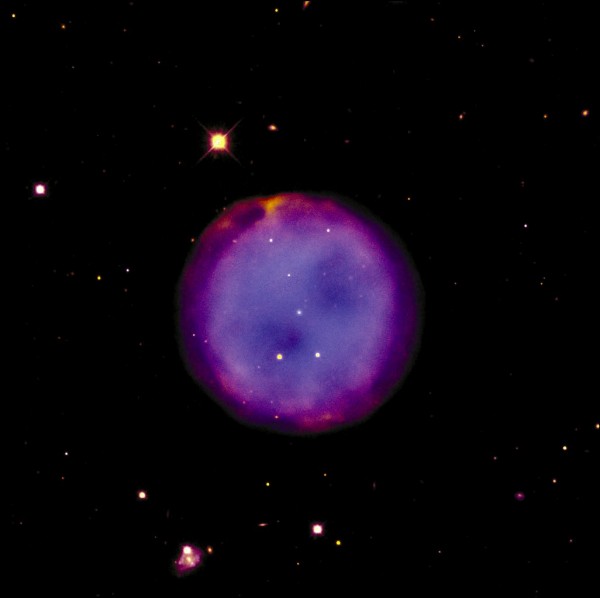 But perhaps the highest-resolution image I've seen -- even though it's dominated by the hydrogen filter -- comes from the 8-meter Gemini Telescope, from the Multi-Object Spectrograph installed just a few years ago. 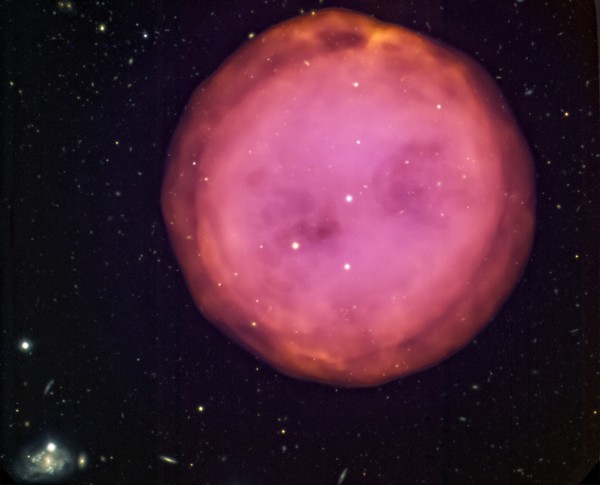 For an object 2,600 light years away, this owl-eyed nebula isn't even as unique as you might think, as there's a Southern Owl Nebula, too! Viewed side-by-side with the "regular" Owl Nebula, M97, there's a difference in the elemental composition of these nebulae, but there's a striking resemblance. 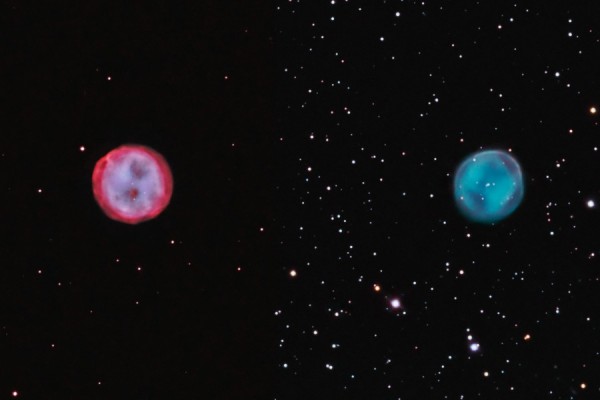 And that's Messier 97, the Owl Nebula! Looking back, we've taken a look at the following Messier objects:

Come back next week for another Messier Monday, where we'll take a look at another one of these deep-sky wonders of the night!

What a gorgeous nebula! When I get my big scope done, this is one of the first things I'll be looking for. I love Messier Monday posts (as well as everything else you post!)

I thought it looked rather like a pokemon - see our Deep Sky Video about M97 http://www.youtube.com/watch?v=Sgk_65UMKTM

That is a good video; thanks for sharing the link! I actually thought of either a Koosh ball with eyes or the "dwarf in the flask" from Fullmetal Alchemist, but I can understand seing a pokemon as well.

Is the light from that nearby star reflecting off of the Owl Nebula? Around the dimple.

I went to the original, full-resolution image of the Owl Nebula as taken by the 8m Gemini Telescope to find out what that "little nebula" by M97 is.

Looks like it's a large galaxy, that appears to be grouped together with others, and hence is interacting/star-forming as well, which explains its bright presence in the UV image as well. See for yourself in this photo I've linked to here!

Is that the stellar remnant dead center in the nebulae?

Planetary nebulae (can we really never change the name?) are so cool.

I also think white dwarfs are cool. Sure black holes and neutron stars get all the attention when it comes to insane densities -- but electron-degenerate matter with a solar-mass object being the size of the earth is pretty insanely dense too! And there's so many of them in the universe, and will be so many more!

What would we change it to? Star rings?