The Art of Physics

The TED@NYC trip took me to Manhattan on Monday for the run-through of my talk that night, but then I was left in The City all day Tuesday with time to kill. My original plan was to go to the Guggenheim Museum, as I've never been there and it's an iconic building, but there was a note on their web page that the ramps were closed in preparation for some exhibit, and I figured that would sort of ruin the point, so I went to the Museum of Modern Art instead.

In this case, though, that's exactly what made it the right choice. While my talk was in pretty good shape, I was still going to be distracted by thinking about it. And I needed to be in good shape for the evening, so I didn't want to get too tired (though I did end up walking most of the way there and back from my hotel on 32nd, because that's the kind of dumbass thing I do). If I'd gone to the Met, I would've either exhausted myself trying to see everything cool, or been annoyed by not being able to focus on the really cool stuff. MOMA, on the other hand, was a nice cultural distraction-- highbrow enough that I didn't feel like an uncultured lout going to The City and doing nothing interesting, but relatively low-stress owing to my willingness to skip lightly past stuff that struck me as pretentious twaddle (there were a lot of video installations reminiscent of the filmography of James O. Incandenza).

Which is not to say that there wasn't good stuff-- the Magritte exhibition was very cool, though they didn't allow photographs. And I liked a good deal of the stuff in the photography collection. there were even a couple of pieces that made me think of physics, most obviously the wave tank in the "featured image" up top. That's a crappy cell-phone picture of the piece, Carsten Nicolai's Wellenwanne Ifo; you can find a better image in this article about the "Soundings" exhibition of which it's a part. The idea is to make a visual representation of sound using a water tank with precariously balanced little rods that dip into the water and make waves when the floor vibrates. The review above correctly describes this as "conceptually clever rather [than] aurally appealing," but, hey, waves! Interference phenomena!

The other piece that reminded me of physics was this large panel of india-ink lines: 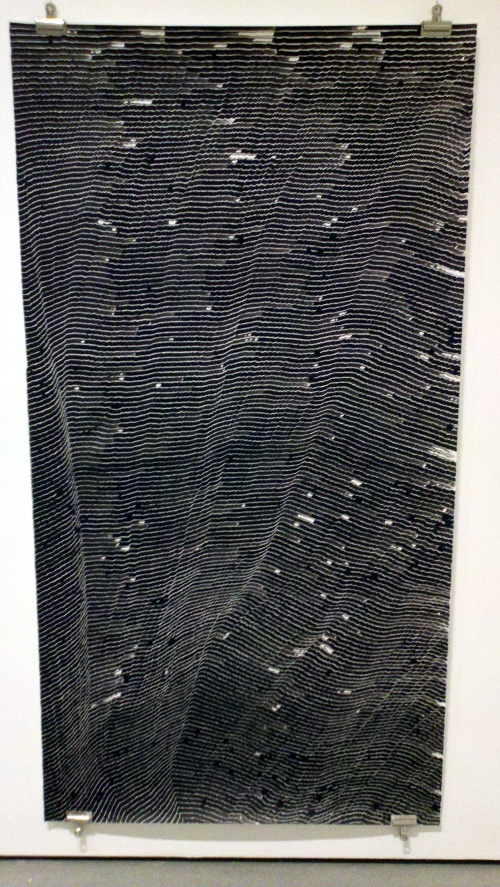 There were two of these, I think, but I only took the one photo. I also took a picture of the plate identifying the artist and describing the piece, so I wouldn't have to remember the title, but of course that's the file that my phone corrupted and rendered unreadable. What I recall is that the top line was drawn freehand with india ink, and the subsequent lines were drawn below it, trying to follow and exaggerate the imperfections in the lines.

There's really no physics content to this, other than the fact that it vaguely reminds me of things like weak measurement trajectories and some plots I've seen trying to represent decoherence. If the description had made an explicit analogy to quantum physics, I would've sighed heavily and rolled my eyes, but it didn't, so I was happy.

There was also a kinetic sculpture consisting of a fan hung from the ceiling of a large room, swinging back and forth (video is from a different museum, but looks like the same fan):

I spent a little while watching this, trying to decide whether there was anything driving the oscillation (other than the air from the fan), but that was about it. Feel free to suggest ways to use this as intro physics homework in the comments-- "estimate the height of the ceiling" is the most obvious option, but there might be something more you could do.

So, all in all, not a bad way to spend an afternoon...

On Monday afternoon, I walked into the TED offices in lower Manhattan just as Zak Ebrahim was starting his practice talk, a powerful story about being raised by a father who subscribed to an extreme form of Islam and eventually assassinated a rabbi and took part in the 1993 World Trade Center…

Via SFSignal's daily links dump, Lilith Saintcrow has a terrific post about the relationship between authors and editors: YOUR EDITOR IS NOT THE ENEMY. I don't lose sight of the fact that I am the content creator. For the characters, I know what's best. It's my job to tell the damn story and…

Since I was going to be down here anyway to sign books at the World Science Festival Street Fair, Kate and I decided to catch one of the Saturday events at the Festival. It was hard to choose, but we opted for the program on Hidden Dimensions: Exploring Hyperspace (Live coverage was here, but the…

Given the recent Feynman explosion (timeline of events), some people may be casting about looking for an alternative source of colorful-character anecdotes in physics. Fortunately, the search doesn't need to go all that far-- if you flip back a couple of pages in the imaginary alphabetical listing…
Advertisment