The nice folks at TED have put up a giant Flickr set of pictures from last week's event. I'm not sure it's complete, but I happened to notice it this morning, and it already had several pictures of me in it, which is all I really care about. I particularly like the "featured image" above, which kind of makes me look like some kind of quantum demagogue urging my electrons on to more efficient production of interference patterns like the one over my shoulder.

But I also like this one, in which a deranged Max Planck looms behind me like a serial killer: 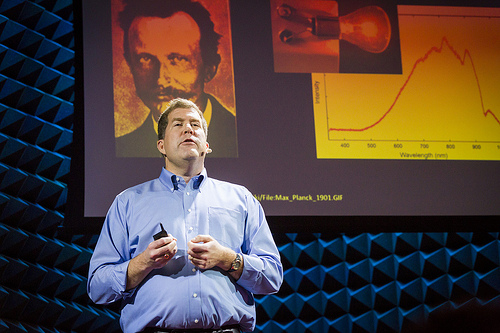 Max Planck knows what I did last summer. (Photo by Ryan Lash)

And this one, where I gesture expansively at a picture of the pond in our back yard: 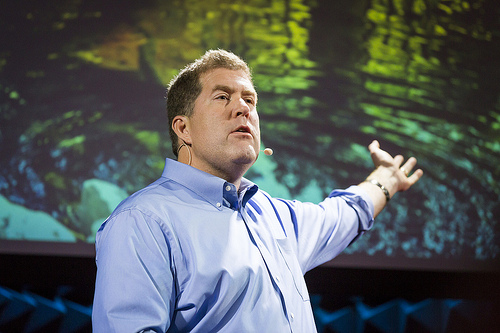 The pond picture is the first slide shown in my talk, and I took that myself. Actually, I took around 80 photos to get two that were passably good, and a bit of GIMPing made this one work well enough for my purposes. Likewise, the light bulb in the Planck slide is a picture I took, and there were probably 30 of those to get the one that I used.

Which is a kind of indirect way of saying that, as always when I see what real, professional photographers who know what they're doing can come up with, I'm blown away. Because kidding aside, those photos make me look awesome. And there are a whole bunch of others, too. I can't imagine how many memory cards got filled up in the course of the evening.

So thanks and kudos to Ryan Lash, the photographer who took all those shots of me. And the many, many others in that set of pictures from last Tuesday.

(Here's the Supreme Leader picture again, for those on RSS who don't see the "featured image" shots:) 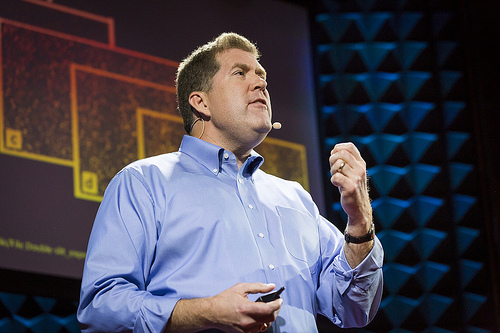 "We must move forward, not backward; upward, not forward; and always twirling, twirling, twirling towards the formation of an interference pattern from many single-particle detections!" (Photo by Ryan Lash)
Tags
personal
Physics
Pictures
Pop Culture
Science